Apple Pay is now available in Italy, and iPhone users in the country are able to add eligible credit and debit cards to the Wallet app for use with Apple's payments service in stores and online.

According to Apple's Italian Apple Pay website, Visa and MasterCards issued by Boon, Carrefour, and UniCredit can be used with Apple Pay in Italy. The site says support for additional banks will be added later this year. 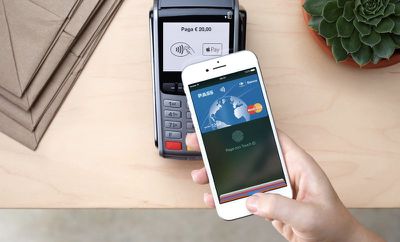 Rumors of Apple Pay's expansion to Italy have been circulating for several weeks as Apple worked to add support for its payments service in the country, and the service has been listed as "Coming Soon" on the Apple Pay Italy site since March.

Belgium, Germany, Taiwan, and South Korea could all see Apple Pay support in the near future based on current rumors.

Wow. Apple is struggling really hard to get any bigger banks to make deals with them in Europe. Time to open this NFC chip to everyone!

L-Viz
Thanks Apple and thanks German banks for still not having Apple Pay in Germany! You gerks!
Score: 6 Votes (Like | Disagree)

the future
Using that "if Steve was ..." phrase should lead to an automatic one week suspension from the Macrumos forums.
Score: 5 Votes (Like | Disagree)

It's amazing that Apple Pay is still skipping Poland which has the most advanced financial infrastructure in Europe as far as I know. We also have enormous share of people using newest technologies for payment like contactless payments, Bing etc. And yes, we don't have biggest iphone userbase but poeple with iPhones are very interested in new methods of payments so it should be worth for Apple to bring Apple Pay here.

They're not skipping anything, they depend on the banks and the payment processors (often linked to the banks) being on board.
Score: 5 Votes (Like | Disagree)

iTom17
When is the Netherlands gonna get Apple Pay? We've got many, many NFC readers out here. Could really benefit from something like Apple Pay. I would use it a lot! :P
Score: 3 Votes (Like | Disagree)
Read All Comments

Tuesday February 7, 2023 12:41 pm PST by Juli Clover
Apple today released updated firmware for the MagSafe Duo charger that is designed to work with the Apple Watch and MagSafe-compatible iPhone models. The new firmware is version 10M3063, but in the settings app, you'll see a 256.1067.0 version number, up from 186.0.0.0. The MagSafe Duo was first released in 2020 alongside the iPhone 12 models, and it has not had a firmware update before....
Read Full Article • 94 comments