Workflow for iOS Regains Chrome and Pocket Actions, Support for Up Next

Apple-owned Workflow was updated to version 1.7.4 today, re-introducing features that were removed when Apple acquired the app and adding new Apple Music actions.

For those unfamiliar with Workflow, it's an automation tool that can be used to create a variety of workflows to accomplish tasks like creating GIFs from photos, pulling images from a website, calculating a tip, posting photos to multiple social networks at once, and much more. 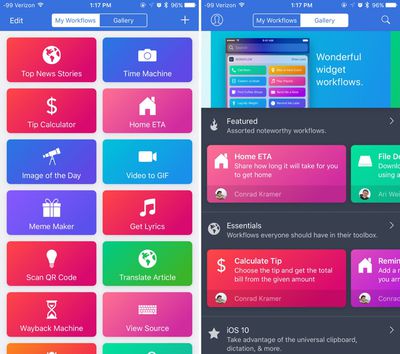 When Apple purchased Workflow back in March, several actions were removed, but support for Google Chrome and Pocket has now been re-added and workflows involving those apps are now functional once again.

Today's update also includes a long list of bug fixes, which are outlined below:

When Apple purchased Workflow, the Workflow team said app integrations and the Gallery would be updated on a regular basis, but a later report suggested Apple planned no more updates. Based on today's update, which adds new features, that report was incorrect.

Though two new actions have been re-introduced, there are still features missing from the Workflow app. Maps actions are restricted to Apple Maps, and translating text only works with Microsoft's translation services. Other previous app actions, including Uber, Telegram, and LINE, are still unavailable.

* Don’t blame Workflow or Apple for removing Google, etc. actions in last night’s Workflow update. It was lawyers, not strategy. 1/x
* A few weeks ago, Workflow asked all supported apps to sign a simple 1-page contract confirming permission to call our URL schemes. 2/x
* People sue Apple over ANYTHING, ALL THE TIME, so it makes sense for their lawyers to be overly cautious like this in an acquisition. 3/x
* I was a bit put off by the need to review and enter into a legal contract for continued Overcast support in Workflow, but I signed it. 4/x
* Google’s lawyers probably ignored such a “small” request or decided it wasn’t worth the hassle or legal risks, so they didn’t sign. 5/x
* And that’s why you can’t have nice things: not Apple being a jerk, but two sets of lawyers being overly cautious, which is their job. <fin>
Score: 10 Votes (Like | Disagree)

Someone posted on 9to5Mac that Workflow is coming to the Mac. I wonder if this will get stage time at WWDC.

macOS has had the same feature for decades, it's called "Automator", it comes with the OS.
Score: 4 Votes (Like | Disagree)

dannys1
I love the design and idea of Workflow. In reality i've never needed to automate anything on my phone (and I barely use the iPads but wouldn't need to there either)

I keep trying to think of a use for it, but I just can't come up with one - and I sort of really want one, if anyone's got any gaming changing ideas?
Score: 4 Votes (Like | Disagree)

wayoutwest5505
Huh ? Never heard of it. I live a very sheltered Life. I'm sure I must need it.
Score: 3 Votes (Like | Disagree)

fabian9
I love this app.

As an example I wrote a small workflow to very quickly and easily enter my current weight and body fat percentage to the health app, without having to work my way through the various health app screens. This allows me to track my fitness much easier.

Michaelgtrusa
Very nice of them to put back these features.
Score: 2 Votes (Like | Disagree)
Read All Comments