Workflow, first released in 2014, is an automation tool that can essentially do anything. It allows users to create a variety of workflows to accomplish tasks like creating GIFs from a series of photos, pulling images from a web page, translating an article, posting photos to multiple social networks at once, calculating a tip, and tons more. 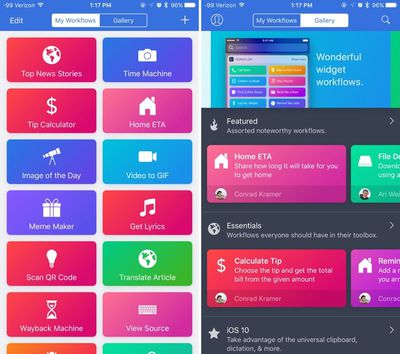 It is equipped with a built-in Gallery, which allows people to quickly find and use a wide range of automation tasks, and it can be used to create custom automations.

Apple is purchasing the Workflow app and the Workflow team, including Ari Weinstein, Conrad Kramer, and Nick Frey, will be joining the company.

"We are thrilled to be joining Apple," said Weinstein in a statement. "We've worked closely with Apple from the very beginning, from kickstarting our company as students attending WWDC to developing and launching Workflow and seeing its amazing success on the App Store. We can't wait to take our work to the next level at Apple and contribute to products that touch people across the world.

Apple confirmed the acquisition of Workflow, which notably received an Apple Design Award in 2015 for its excellent accessibility features, likely one of the reasons behind the purchase.

Typically apps acquired from Apple disappear from the App Store, but Workflow will remain available and will be made free starting later today. The Gallery will continue to be updated on a regular basis, as will app integrations.

Beyond the app, it is not clear what Apple will do with Workflow in the future, and whether it will be built into future versions of iOS and macOS, but it is definitely a possibility. TechCrunch speculates that it could be used alongside Siri in the future, or perhaps be the backbone of powerful automation tools for the iPad.

Update: Workflow can now be downloaded from the App Store for free. [Direct Link]

OmarKhafagy
Two ways this could go:

1. Workflow is left to die a slow and agonizing death while the team is reassigned to (probably AI-related) projects.
2. Workflow gets superpowered with deeper access to the OS.

EDIT:
I'd be curious to see if they'd be willing to acquire Launch Centre Pro or perhaps build something similar to it right into the OS. To me, the combo of LCP & Workflow is a fantastic 1-2 punch.
Score: 21 Votes (Like | Disagree)

jclo
Having Workflow built directly into iOS, especially on the iPad, would be amazing. Hope this leads to awesome things.
Score: 16 Votes (Like | Disagree)

sfwalter
Hopefully the didn't buy it just to kill it. I love Worfow
Score: 16 Votes (Like | Disagree)

ErikGrim
Not wasting any time are they.

Swift
So, after Sal Seghosian leaves... is pushed out...? They buy something very like Automator. iOS only? I'd like to be the fly on that wall.
Score: 11 Votes (Like | Disagree)

GfPQqmcRKUvP
I still have no idea why people need apps/workflows/calculators/etc for calculating tipping.
Score: 8 Votes (Like | Disagree)
Read All Comments