Apple reported its second quarter earnings results on Tuesday, highlighted by revenue of $52.9 billion and 50.8 million iPhones sold. Apple said the results met or exceeded its own targets and guidance, but some of the numbers fell slightly short of what most financial analysts were expecting.

Nevertheless, the majority of analysts remain bullish on Apple's stock price heading into the second half of the year. MacRumors obtained research notes distributed today by over a dozen analysts, and we've compiled their updated AAPL price estimates and guidance for Apple's current third quarter below. 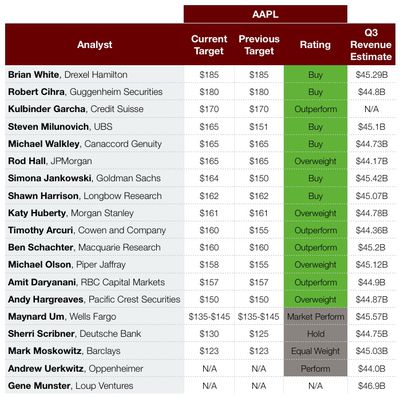 Katy Huberty of Morgan Stanley is one of several analysts anticipating an "iPhone supercycle" based on high expectations for the "iPhone 8" and a growing base of previous-generation iPhone owners:

We continue to believe that a combination of a growing base of aged iPhones and exciting new technology, including OLED displays, 3D sensors and wireless/fast charging will drive an iPhone supercycle that is still underappreciated by the market.

Rod Hall of JPMorgan rather surprisingly believes there is a "high likelihood" that the iPhone 8 will be announced or at least previewed at WWDC in June, marking the start of "iPhone mania," rather than in September as usual:

We believe there is a high likelihood that the company plans to announce or at least preview the upcoming new iPhone at WWDC which starts on June 5. Given this we would expect a weaker than normal Summer for Apple as consumers await a major product upgrade. […] Given that our numbers remain well above consensus forecasts we would advise investors to continue to stock up on AAPL before iPhone mania kicks off in earnest in early June.

Apple introduced the iPhone 3G, iPhone 3GS, and iPhone 4 at WWDC, but it broke that trend when it unveiled the iPhone 4s in October 2011, and each new iPhone since has been announced in September. A fall launch positions the iPhone well for the ensuing holiday shopping season.

Apple previewing the iPhone 8 at WWDC is certainly possible, but it doesn't make sense for a few reasons. For one, the smartphone is widely rumored to be facing mass production challenges that could push its wider availability into at least October or November, a whole four to five months after June.

Second, Apple pre-announcing a new iPhone in June would likely hurt its sales during its summer quarter, as some customers might choose to wait until the latest and greatest model is available. Rumors about a new iPhone are one thing, but Apple confirming a new model would be much more influential.

During the company's post-earnings conference call yesterday, Apple CEO Tim Cook surprisingly acknowledged a recent "pause" in iPhone purchases that he believes is due to earlier and more frequent reports about future iPhones.

Indeed, analysts have been looking toward the future, with all eyes set on the iPhone 8. "One more quarter before show time," wrote Steven Milunovich of UBS. "Hit snooze for 90 days," echoed Amit Daryanani of RBC Capital Markets. "Now we wait," said Benjamin Schachter of Macquarie Research.

Update: This article's headline has been updated with the now-known iPhone X name for Apple's high-end smartphone for clarity.

They swear the 7, Apple Watch, and AirPods are duds!
Score: 4 Votes (Like | Disagree)

When you bet 62% of your revenue on one product line, these things happen.

Apple didn't set out to make the iPhone such a large percentage of their revenue. It just turned out that way because the iPhone was so wildly successful.

Back when nearly all of their revenue came from a single product line things were much more volatile. If the market for computers dried up they were out of luck.

They do need to diversify. Cars, original tv programs, augmented reality, the internet of things. Something to take up the slack when their current cash cow stops producing.

I almost always have some AAPL in my portfolio, but I get nervous when the stock's increasing value makes it too high a percentage of my total, so I sell some. In hindsight, if I still had every share I ever bought I would be much wealthier. Unfortunately, hindsight is not an investment strategy I know how to use well.
Score: 3 Votes (Like | Disagree)

wbeasley
When you bet 62% of your revenue on one product line, these things happen.

Can there be a single person who after ten years doesn't realise you NEVER buy an Apple phone when September is less than 6 months away? Even an S upgrade is worth waiting for.

If Apple spent some more effort on OTHER products and had quarterly release schedules they could flatten out the September spike. There's a lot of other products they could surely spare a few people to work on. Can it really take that much effort to upgrade a laptop with faster processors or more memory? Really?

For too many years we have heard about "the pipeline of great products". Where are they? Why not release the rumoured iPad 10.5" now? Get something positive happening in that space and flatten out the release schedule? It's not that hard to think a January Mac/laptop release, April iPod/iPad release, June Watch/TV release and September iPhone/iOS/OS would spread the load and keep customers happier.

It just feels now like Apple sleeps until June then wakes up and goes "oh we better release something this year".

I used to regularly upgrade iPods and iPads. The incremental increases in speed and capacity and continued premium pricing finally cured me. Memory for other brands is so much more "real world". For music and video I jumped to the dark side where Android phones and tablets let me use OTG USB and SD cards to store way more media. Sure the software isn't as polished as iTunes but VLC works well enough.

iTunes is a mess. Has been for years. Once I could put everything in there that was mine. Then the focus shifted to getting me into the Cloud - with limits. 25,000 matched songs. That was it. For a long time. There's too much going on in there and too little focus. Menus, sidebars come and go. Too much "Try Apple Music". I do stream but use Spotify and Netflix. Why? Because my ISP provides unmetered Netflix and my iPhone carrier gives me unmetered Spotify data.

Apple today seems like Microsoft at it's peak. Too scared to do anything other than milk it's success. It took competition (and ousting a few lacking-in-vision managers) before they got their act together again. Apple hardware and software have always been more durable, better quality and felt worth the premium price. My 10 years old iMac only just can't run the latest OS. It soldiers on and for most tasks works well. But it could be due an upgrade if the right product came along.
Score: 3 Votes (Like | Disagree)

calzon65
I think the iPhone 8 will be successful, but since Apple has 63% of its revenue coming from iPhone sales, I think they are flirting with danger.
Score: 3 Votes (Like | Disagree)

This seems to be in error. The iPhone 3G, 3GS, and 4 were all unveiled at WWDC. The 4S was not mentioned until Apple's October 2011 event.

Whoops. I mentioned the iPhone 4s twice there as you can see. Thanks for the heads up.
Score: 2 Votes (Like | Disagree)
Read All Comments