During today's second quarter earnings call, Apple CEO Tim Cook said Apple was seeing a "pause" in purchases of the iPhone, which he attributed to "earlier and much more frequent reports about future iPhones."

The comment came in response to a question about a 451 research survey, which mentioned a nine year low in iPhone purchase intent. Cook said he hadn't read the survey in depth, but explained Apple was seeing slower iPhone sales. 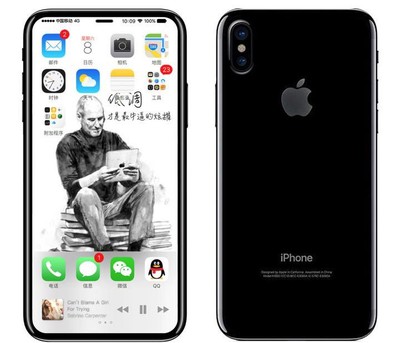 I only glanced at it and so I haven't had time to study it, but in general, what we are seeing... we're seeing what we believe to be a pause in purchases on iPhone, which we believe are due to the earlier and much more frequent reports about future iPhones. And so that part is clearly going on, and it could be what's behind the data. I don't know, but we are seeing that, in full transparency.

Rumors about the iPhone 8, coming in 2017, started before the iPhone 7 and the iPhone 7 Plus were even released, despite Apple's ever-increasing focus on secrecy. Major changes are rumored to be in the works for the 2017 iPhone, and those changes have been difficult for Apple to keep quiet.

The device is expected to feature the biggest overhaul to the iPhone in a number of years, with an edge-to-edge OLED display with no Home button, a glass body with stainless steel frame, Touch ID embedded under the screen, new biometric features, a revamped camera, and more.

With the number of rumors circulating about improvements coming to the iPhone, it should come as no surprise that customers are holding off on an iPhone purchase until 2017, when the entirely revamped iPhone debuts.

SuprUsrStan
The dip in sales couldn't have been because the iPhone 7 looks virtually identical to the one that came out last year AND the year before. And it certainly wasn't because the only distinguishing aspect is the loss of a headphone jack.

DMVillain
Well that's what happens when you underwhelm.
Score: 41 Votes (Like | Disagree)

I'm far from being an Apple apologist, but these sales numbers are insane. 430,000 fewer iPhones over a 3 month period compared to the same period last year. There are quite a few warning signs of future trouble for Apple... this isn't one of them.
Score: 22 Votes (Like | Disagree)

alexgowers
A pause in design will result in less desire for iPhones. Who would have thought?

Also, Tim being surprised by iPhone 7 plus sales being stronger than iPhone 7 shows just how out of touch he is with tech and users! I'm always surprised that these guys know so little about their market. You can't put a bigger battery and better camera in a phone and expect people not to want it! I know they're just human and no one is really much more of an expert than anyone else with the same information but damn I wish they could view it from a different perspective once in a while.
Score: 21 Votes (Like | Disagree)

Apple is doomed :rolleyes:... ok everyone can continue now

You know, what has become way more annoying than the negative critiques of Apple's moves and performance over the past few years ...

... is the number of cliche artists who mock that criticism by making sarcastic 'Apple is doomed' posts.
Score: 21 Votes (Like | Disagree)
Read All Comments

Friday June 18, 2021 9:41 am PDT by Sami Fathi
After a long wait, YouTube for iOS is officially gaining picture-in-picture support, allowing all users, non-premium and premium subscribers, to close the YouTube app and continue watching their video in a small pop-up window. In a statement to MacRumors, YouTube says that picture-in-picture is currently rolling out to all premium subscribers on iOS and that a larger rollout to all US iOS...
Read Full Article • 146 comments

Friday June 18, 2021 2:06 am PDT by Sami Fathi
Intel may see its market share fall to a new low next year, in large part thanks to Apple's decision to move away from using Intel processors in its Mac computers and instead use Apple silicon. Apple announced last year that it would embark on a two-year-long journey to transition all of its Mac computers, both desktops, and laptops, to use its own in-house processors. Apple is expected to...
Read Full Article • 156 comments

Wednesday June 16, 2021 11:26 am PDT by Juli Clover
Update: Bloomberg inaccurately interpreted the original comments and has since drastically changed the wording of its article. The original Bloomberg piece said that Apple would be prohibited from pre-installing its own apps on iPhones. The updated Bloomberg article has been rewritten to clarify that the antitrust legislation prohibits Apple from preventing users from removing Apple-created...
Read Full Article • 516 comments

Friday June 18, 2021 6:59 am PDT by Sami Fathi
Apple supplier TSMC is preparing to produce 3nm chips in the second half of 2022, and in the coming months, the supplier will begin production of 4nm chips, according to a new report from DigiTimes. Apple had previously booked the initial capacity of TSMC's 4nm chip production for future Macs and more recently ordered TSMC to begin production of the A15 chip for the upcoming iPhone 13,...
Read Full Article • 122 comments