For the last month, Waymo has been testing out a small fleet of self-driving vehicles with a handful of participating residents in Phoenix, Arizona, and this week the company has noted the success of that test by opening up applications to join its autonomous car program to all Phoenix citizens. Dubbed the "early rider program" and stocked by 600 Chrysler Pacifica Hybrid minivans, Waymo said it will be accepting "hundreds of people with diverse backgrounds and transportation needs" into the program.

The Waymo trial is extensive, offering those participating full-time, on-demand access to one of the self-driving minivans, which can drive the participants anywhere within the targeted area, equivalent to "about twice the size of San Francisco." Waymo said that its intention in the test is to really delve into the reasons why people would prefer using an autonomous vehicle over a traditional car.

In a new video posted today to highlight Waymo's self-driving van, one of the first families in the program mention small but meaningful advantages like taking stress from traffic out of the equation, and not having to ask a parent for a ride every day.

Our early riders will play an important role in shaping the way we bring self-driving technology into the world — through personal cars, public transportation, ride-hailing, logistics and more. Self-driving cars have the potential to reshape each and every one of these areas, transforming our lives and our cities by making them safer, more convenient and more accessible.

Now, the early rider program is open up to the Phoenix public at large. During the application process, Waymo asks potential participants to answer questions including why a self-driving car is most needed in the household and how it would improve the lives of those who use Waymo's van. Although the test is expanding this week, the company still says that it is accepting only a "limited number of early riders at this time."

Waymo originally began as a self-driving initiative within Google in 2009, and then spun off into a subsidiary of Alphabet late last year. Besides Waymo, a growing number of companies have shown interest in self-driving vehicle technology, but none have yet to launch a program as practical as Waymo's current public test in Phoenix. Uber has tested a fleet of self-driving cars in places like San Francisco, but the car-hailing company subsequently faced restrictions from the California DMV and pulled the cars from the road. 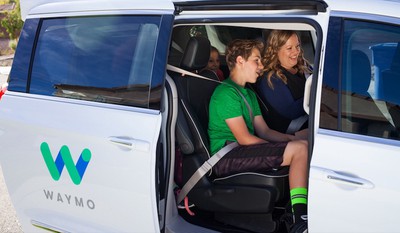 Even Waymo itself sued Uber earlier this year, with Waymo claiming that Uber stole its self-driving intellectual property. The lawsuit was specifically tied to Waymo's LiDAR system, which works by bouncing millions of laser beams off of surrounding objects to create a 3D picture of the world for detecting and avoiding objects. Waymo alleged that a former Google employee had stolen the LiDAR data after he had moved over to Otto, a self-driving trucking company that was then acquired by Uber.

In the midst of the self-driving car boom, Apple is now rumored to be working on an autonomous car software of its own that could be placed within existing vehicles. Early rumors of an "Apple Car" have since been dashed "for now" as the company focuses on building the self-driving system. The team behind that initiative is said to have until the end of 2017 to "prove the feasibility" of its autonomous technology, at which time Apple will officially decide a final direction for the platform.

thisisnotmyname
If I were in the Phoenix area I'd be all over this. Very cool!
Score: 4 Votes (Like | Disagree)

It's phoenix so these will be stolen in no time.

Then get arrested five minutes later. Those vehicles have more tracking devices and live feed monitoring than anything on the planet. I'll even bet there're cameras inside the vehicle that already captured photos of current passengers.
Score: 3 Votes (Like | Disagree)

Its not about safety, it's about culture and quality of life. Phoenix was a decent place to grow up but I'm ready to leave it far behind. I was having too much fun in my 20's to care, was married through most of my 30's so I was busy trying to support my family. Now in my 40's, my kiddo is in high school with plans to go into the military. Once she does I am gone.

You love it here? Great. I hate it. Its become the antithesis to having a decent life in my eyes.

With this we agree... Phoenix has gone down hill fast with the influx of California transplants.
At least the snowbirds would leave after spring training.
Personally I'd be living up in Pinetop if it weren't for the fact that it's a solid 4 hour drive to the office.
Score: 2 Votes (Like | Disagree)

With this we agree... Phoenix has gone down hill fast with the influx of California transplants.
At least the snowbirds would leave after spring training.
Personally I'd be living up in Pinetop if it weren't for the fact that it's a solid 4 hour drive to the office.

Pinetop Lakeside is nice, in my married life we used to camp up there and its beautiful. I loved Jerome. Arizona is a good place to live if you like road tripping (which I do). Its unfortunate its become a haven for crusty old republicans and the schools are a joke. There's a small but dedicated foodie scene that's already getting stamped out by the city council.
3 years to go.....I keep telling myself.....3 years....
Score: 2 Votes (Like | Disagree)

If I were in the Phoenix area I'd be all over this. Very cool!

Yep. Definitely would. I'm not even a fan of autonomous driving... at all. Having the opportunity to actually live test the product is pretty darn cool though. Who knows, it might even change my opinion about autonomous driving.
Score: 2 Votes (Like | Disagree)