Apple has developed a training program to instruct employees on how to handle cars being used to test its autonomous driving software platform, according to documents obtained by Business Insider.

The company's "Development Platform Specific Training" document references an "Apple Automated System" and a "Development platform," alluding to the self-driving software platform Apple is rumored to be building after plans for a full autonomous electric vehicle fell through. 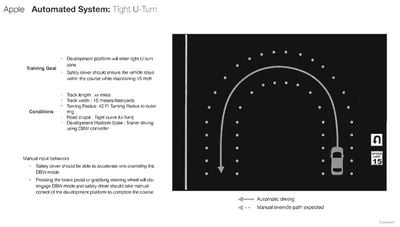 Click to enlarge
Apple recently obtained a permit from the California DMV that will allow it to test self-driving vehicles on public roads, and as part of that process, the company appears to be training employees to use whatever system it's testing. According to the DMV, Apple plans to use three 2015 Lexus RX450h SUVs, which will be driven by six drivers with expertise in areas like machine learning.

Based on the documents, drivers are required to pass seven tests as part of their training before being allowed to work with Apple's software platform. Each driver must complete two practice runs and three trials to pass tests, which cover topics like taking control of the vehicle at tight U-turns, sudden acceleration, sudden braking, and more.

According to the training packet, Apple's self-driving car uses a Logitech wheel and pedals to actuate drive by wire, and it supports one person at a time.

Pressing the brake pedal or grabbing the steering wheel in Apple's test vehicles will disengage the electronic driving mode, but drivers can accelerate without overriding the "drive by wire" mode.

Apple's work in the car industry has been something of an open secret for the past three years. The company was originally planning to create its own autonomous vehicle, but pivoted to an autonomous driving software platform following internal strife and leadership issues.

Apple is now said to be creating a driving system under the leadership of Bob Mansfield, with the car team having been given until the end of this year to prove the feasibility of a self-driving car platform. Such a system could potentially allow Apple to partner with car manufacturers as a sort of expansion of CarPlay.

With Apple ready to test the software on public roads, it appears development is fairly far along. Should the company take vehicles out on California streets, its work will need to be publicly shared with the DMV based on California law.

Kiwikat88
Siri can't even figure out which "to" "too" or "two" I mean to use with voice recognition. I sure as heck wouldn't trust Apple with my life.
Score: 25 Votes (Like | Disagree)

pgiguere1
On one hand, I feel like self-driving car is a really interesting market to invest into.
On the other, I'm worried about Apple's capability to make good AI. I mean, look at Siri, and it's been out for 6 years...
Score: 24 Votes (Like | Disagree)

Rogifan
Can someone tell me who they are creating this software for? All the major automakers already investing billions in this space. They don't need Apple. Plus has Apple ever been successful being a piece of technology in somebody else's product? Unless their goal is their own vehicles for some self driving ridesharing service I see big fail all over this.
Score: 16 Votes (Like | Disagree)

Siri can't even figure out which "to" "too" or "two" I mean to use with voice recognition. I sure as heck wouldn't trust Apple with my life.

It picks the right one for me. You have to give it context to understand what you mean. You can't just say, "to" and it expect it to know. But if you say, "I too would like to buy two flowers", it works just fine.
Score: 9 Votes (Like | Disagree)

IJ Reilly
We don't know that Apple's plans to build a car "fell through" because we never had any actual information that they were planning on building one. All we really had to support that idea was a lot of wishful thinking accompanied by the usual fantasy renderings. Not the same thing as reality, last I checked.
Score: 8 Votes (Like | Disagree)

ps3zocker
Well, Apple is not building software for others here. I believe they just stopped the whole (real) car project because they thought the software is the most important thing here. Without software there is no hardware. Building the car is probably the more trivial thing here compared to autonomous driving. They can build this when the software is ready.
Score: 8 Votes (Like | Disagree)
Read All Comments

Friday November 25, 2022 4:40 am PST by Mitchel Broussard
Black Friday is winding down for 2022, but many Apple products are still seeing major discounts. In this article, you'll find every Apple device with a notable Black Friday sale. We'll be updating as prices change and new deals arrive, so be sure to keep an eye out if you don't see the sale you're looking for yet. Note: MacRumors is an affiliate partner with some of these vendors. When you...
Read Full Article • 29 comments