Back in June, Apple began work on a $6.6 million upgrade of the plaza and glass cube at its iconic flagship retail store on Fifth Avenue in Manhattan. Barriers surrounding the plaza and the glass cube itself quickly went up, with customers continuing to access the store through a covered passageway leading to the main entrance. At the time the work began, planning documents revealed that Apple would be removing the glass cube and working on drainage, pavers, and bollards on the plaza, but it was unclear just what changes Apple would be making to the cube itself. 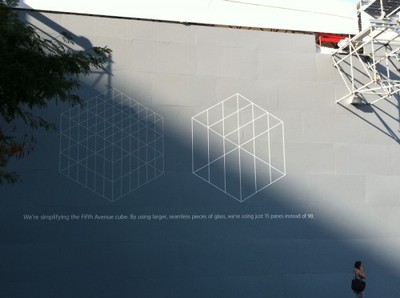 Apple has now revealed its plans for the cube with a new informational sign posted on the barrier surrounding the plaza, showing that the company is completely replacing the cube's glass panels with new, larger panels that will also be "seamless" for a cleaner appearance.

According to the diagram of the new cube, Apple will be using three glass panes per side of the cube (plus the top), with each side pane stretching the entire height of the cube.

Apple last year filed for a trademark on the original design of the Fifth Avenue store's cube, seeking to protect what was recently ranked as one of the most-photographed sites in Manhattan based on a study of geotagged photos posted to Flickr and Picasa.

JimmyDreams
I read somewhere that Apple needed those 90 glass panels for their glossy monitors.....

xUKHCx
I wonder how long it will be until it is made of only 5 :eek:
Score: 10 Votes (Like | Disagree)

840quadra
It is nice to see something from Apple before it is officially unveiled. I wish they did this with some of their products too ;) .

Very interesting. I was there on opening day. I wonder what useful improvements will be made over the cosmetic ones... :)

It will be much snappier™.
Score: 8 Votes (Like | Disagree)

Someone has money to burn. i guess this is what happens when you make tons of money off chinese workers


Q: what do you call grocery cashiers in China?

Do you feel like Chinese workers are being exploited to make Apple products? Do you know the status of the average Chinese citizen compared to one who works on products Apple produces? I think you would be surprised.
Score: 7 Votes (Like | Disagree)
Read All Comments