Apple's new range of iMacs will launch in the second half of 2017 and will include a "server-grade" model to cater for the high end creative professional market, according to Taiwan-based supply chain sources.

Apple has already confirmed it is working on new iMac models for release later this year, but today's report offers another hint at what could be in store for creative pros and puts a more specific timeframe on those plans. According to the report, production of two new iMacs is said to begin next month, with a view to launching the consumer desktops between July and September and a "server-grade model" at the tail end of 2017. 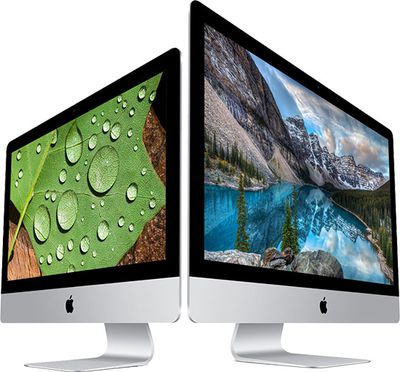 Apple currently has a 21.5-inch and a 27-inch iMac available in the market and the new products are expected to be the upgrades of the two models and are expected to hit the market in the third quarter to catch up with the year-end holiday season.

The report comes from DigiTimes, which has a mixed track record when it comes to rumors, but with Apple already having taken the unusual step of confirming it is working on new iMac models for a late 2017 release, this latest information presents a reasonable timeline.

Typically, iMacs include a mobile-class GPU rather than a desktop-class card, so this last spec could refer to either, while AMD has a contract with Apple to supply the discrete graphics chips for future high-end 27-inch iMacs. The new iMacs for 2017 are said to be manufactured by Quanta Computer, which is expected to remain the largest all-in-one PC maker in 2017.

The earlier report detailing identical tech specs claimed Apple's new iMacs would be accompanied by a brand new keyboard. A previous report said Apple was exploring a standalone keyboard with a Touch Bar and Touch ID, but its release is said to depend on how well those features have been received on the latest MacBook Pro.

The original source of the iMac tech specs, Pike's Universum, also claimed Apple is working on an 8K external display, which would presumably feature as part of the company's highest end iMac offering. All iMacs are expected to ship with USB-C ports and Thunderbolt 3 connectivity.

Spunkmeyer
Sorry, Apple. Too little, too late. I transitioned my architecture practice to Windows 2 years ago because you completely ignored the needs of users like me, and provided no roadmap on which we could make our equipment purchases.
Score: 58 Votes (Like | Disagree)

Sorry, Apple. Too little, too late. I transitioned my architecture practice to Windows 2 years ago because you completely ignored the needs of users like me, and provided no roadmap on which we could make our equipment purchases.

otternonsense
Meanwhile, the "revolutionary" 2016 MacBook Pro, with all its anaemic glory, hasn't exactly caused a revolution in the industry. Quite the opposite, as Apple used to top this chart since 2010. Cupertino's apologists may be purposefully obtuse, but the market sure isn't.

At this point, I put little trust on anything that comes out of Apple's fabled "pipeline". Hope I'm proven wrong.

maflynn
I wonder about the heat dissipation with xeon processors.
Score: 36 Votes (Like | Disagree)

Crosscreek
This sounds great but if it's not user upgradeable then not so great. And I don't mean just Ram.
Score: 36 Votes (Like | Disagree)

jayducharme
I still can't see the new iMacs being for "pros" since most professionals want a machine they can upgrade (beyond just more RAM). And we all know that iMacs are one of the least upgradable machines on the market. This will probably be another "prosumer" offering.
Score: 34 Votes (Like | Disagree)
Read All Comments