Apple Not Worried About Apple Pay's Slow Adoption, Believes on Path to Replace Cash and Cards

Apple's trouble with getting a wide array of its users, retail partners, and banks to adopt Apple Pay has been highlighted in a new article today by The Wall Street Journal, which also underlines a belief from Apple executives that the service's growth is adequate and that Apple Pay could soon become consumers' "primary payment system," in lieu of cash and credit cards.

Data collected from technology research firm Creative Strategies reported that 40 percent of U.S. consumers have raised concerns about security risks of adding a credit or debit card onto their iPhone, while more than 60 percent aren't even familiar with contactless payments.

While data from a recent Nilson Report noted that Apple Pay's rate of acceptance has "more than doubled since 2015," only a third of stores based in the U.S. have accepted it as a form of payment. Many well-known companies have rolled out support for the service, including Best Buy and Whole Foods, but there remain notable absences from Apple Pay's retail supporter list, namely Target and Wal-Mart. 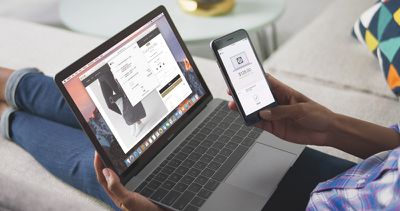 Braden More, the head of partnerships and industry relations at Wells Fargo, asked, "If you can’t use it everywhere, why are you going to switch?" This reticence by consumers to jump in on Apple Pay's launch is said to have permeated within the company surrounding its debut, to the point where Apple executives "were reluctant to promote it." Apple Pay has been noticeably absent from the company's advertising strategy since its launch, with just two Apple Pay-focused commercials being made in nearly three years.

Apple expected consumers to embrace Apple Pay as energetically as they did iTunes—an instant hit when it launched in 2003—because executives felt it was faster and safer than existing payment systems, a former employee on the project said. When retailers didn’t support it initially, the person said, Apple executives were reluctant to promote it and invest in retail terminals that would spur adoption.

More recently, the company has become less concerned with Apple Pay's slow adoption over the past few years, because it still sees the mobile wallet as a nascent service whose domination over the industry will come with time. "Does it matter if we get there in two years, three years [or] five years?" Apple senior vice president Eddy Cue said in an interview. "Ultimately, no." Cue compared Apple Pay's adoption as faster than other mobile wallets and thinks it could go so far as to replace cash, debit and credit cards as a primary payment system.

Until that happens, Apple Pay vice president Jennifer Bailey is working on beefing up the company's retail training so that users aren't more knowledgable of paying with the service than employees. The company is said to be working with retailers to add Apple Pay instructions into work manuals as a way to spread knowledge of the mobile wallet's check-out process.

Apple Pay made $30 million for the company in the last fiscal year, accounting for a small portion of Apple's total services business, which made $24.35 billion in total in the same period. While adoption is low and consumer knowledge remains slim, Apple's services business -- which includes iCloud, the App Store, iTunes, and more -- has become a point of focus for the company, so much so that it expects to double its revenue in this area by 2021, Apple Pay expectedly included.

For this reason, David Roberts of Nilson said that Apple Pay is right on the cusp of a wider, "ubiquitous" acceptance.

Nilson Report publisher David Robertson said that with about a third of U.S. retailers adopting it, Apple Pay is on the cusp of broad acceptance. “It’s going to become so ubiquitous that we will all do it,” he said.

Notably, the rest of 2017 is a big year for Apple and Apple Pay, as the year marks the three-year anniversary of Apple Pay, as well as the end of three-year contract agreements that the company made with banks and credit card issuers back in 2014. Apple will begin negotiations to renew these contracts for the next few years, which the company hopes to be a major contributing factor in helping to double its services revenue over the next four years.

LiE_
Works great in the UK, nearly all shops now have contactless which accept Apple Pay by default.
Score: 26 Votes (Like | Disagree)

jacobh101
they are fighting with large corporations that think QR codes for payment is the future. #SAD
Score: 19 Votes (Like | Disagree)

Contactless payment is not the future; lose your iPhone and without credit cards, you are stranded.

It's much easier to whip out a credit card.

Having said that I use Apple Pay at times.

Lol but what if you lose your wallet? Then not only are you without credit cards, but someone could likely be using them in the meantime.
Score: 15 Votes (Like | Disagree)

BvizioN
Since it was launched in UK I have been using it almost every day. Love it how I don't need to be worried if I have forgotten my walled at home when I head to work.
Score: 14 Votes (Like | Disagree)

ZCT
In all fairness, American consumers are notoriously slow to adapt to changes in payment methodologies.

Contactless and Chip and PIN systems have existed outside of America for well over a decade, yet so many American machines still have a Post It attached to them saying that the chip reader doesn't 'work.'

Our banks have kept us in the dark and moved at snails pace to adapt to changes in world banking, and it's pretty sad. After all a piece of VHS tape glued to a plastic card is a bit of a 1980s solution to things.

Heck, we're still using Imperial measurements over here, while the rest of the world adopted metric several decades ago.
Score: 13 Votes (Like | Disagree)

DrewDaHilp1
The problem isn't with Apple or Apple Pay, I use it whenever I can. It's faster than using a chip card. The problem is with the big retailers not adopting it for their own reasons i.e not being able to track purchases.
Score: 12 Votes (Like | Disagree)
Read All Comments