Apple's manufacturing partners will begin limited production of the rumored 10.5-inch iPad Pro this month, according to IHS Markit analyst Rhoda Alexander, who spoke with Forbes over the weekend. 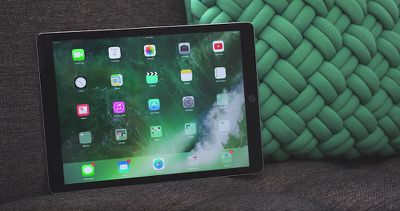 At this point, however, it remains unclear whether the 10.5-inch iPad Pro will be announced later this spring, at WWDC 2017 in June, or in the fall or later, as rumors are lacking consensus.

Japanese blog Mac Otakara previously said Apple would unveil its new iPad Pro lineup at a March event, but that rumor failed to materialize. Instead, Apple last week announced a low-cost 9.7-inch iPad, 128GB iPhone SE, new Apple Watch bands, and a (PRODUCT)RED iPhone 7 and iPhone 7 Plus through its Newsroom.

The latest rumor from DigiTimes claims Apple is planning to unveil the 10.5-inch iPad Pro at an early April event to "mark the inauguration" of its new Apple Park campus, which opens to employees next month. While this timeline could be correct, it's unlikely Apple would have shared such specific plans with the supply chain.

Alexander believes an April launch "still looks somewhat tentative," but she said "the necessary elements are starting to come together," so it's possible Apple could do a limited spring launch in the United States and select other countries, followed by a wider rollout as production ramps up.

A person with sources within Apple's supply chain told MacRumors that they still expect the 10.5-inch iPad Pro to launch in the spring. The person requested full confidentiality due to the nature of their position.

It looks like Apple is doing the releases in a staggered fashion. I still expect a 10-inch-range iPad sometime in the spring. The supply chain is pretty clear that it is coming, maybe as soon as April.

A handful of Apple analysts that we spoke to reiterated that a fall launch is more likely, however, and if volume production has yet to begin, then a launch later this year rather than sooner is certainly a possibility.

Apple pundit John Gruber made a good point last week about why it would make sense for Apple to wait until at least October to announce the 10.5-inch iPad Pro: to avoid spoiling the design of the much-rumored iPhone with an edge-to-edge OLED display, which is expected to be announced in September.

Among all the other aforementioned things that don’t make sense regarding the rumor that a 10.5-inch iPad is imminent is the idea that the new design language would debut on an iPad, not an iPhone.

But just how much of a spoiler the 10.5-inch iPad Pro might be remains to be seen, as rumors are conflicting about whether the tablet will have an edge-to-edge display or simply a narrow bezel design. It is also uncertain if Apple will remove the Home button on the 10.5-inch iPad Pro in line with the "iPhone 8."

Back in August, KGI Securities analyst Ming-Chi Kuo said Apple would launch a 10.5-inch iPad Pro and new 12.9-inch iPad Pro in "2017," and he generally shares accurate information, so there is a good chance the tablets are coming at some point this year. He also predicted the low-cost 9.7-inch iPad.

Just a few weeks ago, mobile marketing firm Fiksu spotted four new iPad identifiers in its device data. As it turns out, these model identifiers are not for the new 9.7-inch iPad, suggesting that they could be for Wi-Fi and Wi-Fi + Cellular versions of the 10.5-inch iPad Pro and a new 12.9-inch iPad Pro.

Fiksu suggested the new iPad models could launch within a month, which would suggest a release by the end of April.

Return Zero
Prediction: everyone has gotten it all wrong. The new 10.5" device is the new flagship iPhone, the iPhone X XL Plus. It costs $1299 but ships with free AirPods so you don't have to try to hold the thing up to your ear.
Score: 17 Votes (Like | Disagree)

slimothy
It's going to be the same footprint of a 9.7" iPad, but the screen will take up the whole front of the device, much like the iPhone 8. It will not launch until the iPhone 8 does.
Score: 8 Votes (Like | Disagree)

dumastudetto
I'm ready to order now. Let's start the pre-orders at least, I want to jump in at the front of the line.
Score: 5 Votes (Like | Disagree)
Read All Comments

Monday June 27, 2022 1:57 pm PDT by Juli Clover
Benchmark testing has indicated that the 256GB variant of the 13-inch MacBook Pro with M2 chip offers slower SSD performance than its M1 equivalent, and now real-world stress testing by YouTuber Max Yuryev of Max Tech suggests that the 256GB SSD in the 13-inch MacBook Pro is also underperforming in day-to day-usage. The M2 MacBook Pro with 256GB SSD and 8GB RAM was slower than the M1 MacBook ...
Read Full Article • 345 comments

Wednesday June 29, 2022 5:23 pm PDT by Sami Fathi
The redesigned MacBook Air with the all-new M2 Apple silicon chip will be available for customers starting Friday, July 15, MacRumors has learned from a retail source. The new MacBook Air was announced and previewed during WWDC earlier this month, with Apple stating availability will begin in July. The MacBook Air features a redesigned body that is thinner and lighter than the previous...
Read Full Article • 300 comments