Apple recently became listed as a member of the Wireless Power Consortium, committed to the open development of the Qi wireless charging standard. The listing was brought to our attention by IHS Technology. 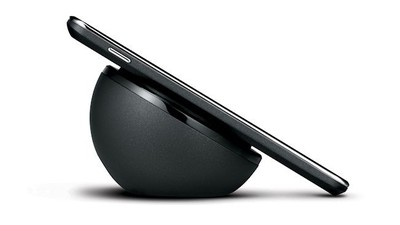 Apple, which has since confirmed it is a member, has become one of over 200 companies that belong to the consortium, including Samsung, LG, HTC, Qualcomm, Verizon, ConvenientPower, Aircharge, Dell, Canon, Sony, ST Microelectronics, Toshiba, Texas Instruments, Philips, Panasonic, Bosch, Nokia, and Huawei.

Qi is the leading wireless charging standard, used by more than 200 companies in products ranging from smartphones to cordless kitchen appliances. Samsung's latest Galaxy smartphones, for example, feature Qi-based wireless charging which requires placing the device on one of its "Fast Charge" stands.

Qi, pronounced "chee," is capable of scaling from less than 1 watt to more than 2,000 watts of power, making the standard more than adequate enough for charging any smartphone. With Qi's latest Quick Charge technology, a five-minute charge can provide a smartphone with up to five hours of battery life.

The so-called "iPhone 8" is widely rumored to include wireless charging, so Apple's participation in the consortium is perhaps unsurprising. Moreover, there is increasing evidence to suggest the "iPhone 8" may use inductive technology, which would require a charging puck or pad, rather than long-range charging.

Luxshare is also a member of the Wireless Power Consortium, which is notable given a recent rumor claiming the "iPhone 8" will have a separate wireless charger based on technology from the Chinese company. Luxshare was rumored to be a supplier of wireless charging coils for the Apple Watch charger.

In 2015, the Apple Watch was found to be compliant with the Qi wireless charging standard, but Apple did not submit it for interoperability testing. However, this does not guarantee that Apple will use the Qi standard for future iPhones, but its membership does show its interest in the technology.

Over the course of the last year, there has been ongoing speculation that wireless charging company Energous has inked a deal with Apple to potentially provide wireless charging technology for the iPhone 8, but patents and other evidence suggest Apple may pursue its own in-house inductive charging solutions instead.

Update: Apple confirmed that it has joined the Wireless Power Consortium in a statement to Business Insider.

Apple is an active member of many standards development organizations, as both a leader and contributor. Apple is joining the Wireless Power Consortium to be able to participate and contribute ideas to the open, collaborative development of future wireless charging standards. We look forward to working together with the WPC and its members.

Apple said it "looks forward to working together" with the other members to help further the "development of future wireless charging standards."

LordQ
A mat is not real wireless charging.
Score: 18 Votes (Like | Disagree)

dannyyankou
I'm calling it now, the iPhone 8 will only be able to charge with Apple's own first party charging pad. Qi devices should be able to work with any charging pad, but Apple will find a way.
Score: 10 Votes (Like | Disagree)

Dave245
I don't see the point in this, you still have to place the phone on the charging matt for it to charge, i'm willing to see what Apple are doing but i was never impressed with the Samsung version, maybe Apple will change my mind in September with the new iPhones, but at the moment it seems a bit pointless.
Score: 8 Votes (Like | Disagree)

macsrcool1234
A decade late to the game and using the same **** technology as everyone else.
Score: 7 Votes (Like | Disagree)

WinstonRumfoord
Contact "wireless" charging always seemed worse than traditional wired charging to me. Introducing more frequencies into the air with no real benefit other than "cool".
Score: 6 Votes (Like | Disagree)
Read All Comments

Friday June 18, 2021 9:41 am PDT by Sami Fathi
After a long wait, YouTube for iOS is officially gaining picture-in-picture support, allowing all users, non-premium and premium subscribers, to close the YouTube app and continue watching their video in a small pop-up window. In a statement to MacRumors, YouTube says that picture-in-picture is currently rolling out to all premium subscribers on iOS and that a larger rollout to all US iOS...
Read Full Article • 165 comments

Friday June 18, 2021 6:59 am PDT by Sami Fathi
Apple supplier TSMC is preparing to produce 3nm chips in the second half of 2022, and in the coming months, the supplier will begin production of 4nm chips, according to a new report from DigiTimes. Apple had previously booked the initial capacity of TSMC's 4nm chip production for future Macs and more recently ordered TSMC to begin production of the A15 chip for the upcoming iPhone 13,...
Read Full Article • 145 comments