Verizon today introduced its first unlimited data plan since 2011. Verizon Unlimited, which includes unlimited talk, text, and 4G LTE data, will cost $80 per month for a single smartphone or tablet, or $45 per month for four lines. The plan will be available to new and existing customers starting Monday. 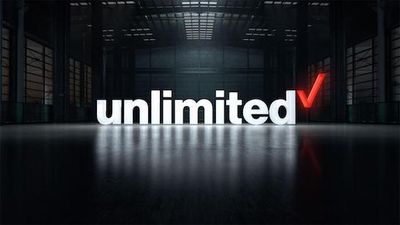 The plan also includes calling and texting to Mexico and Canada, and up to 500MB per day of 4G LTE roaming in those countries.


In line with rivals AT&T, T-Mobile, and Sprint, Verizon may de-prioritize customers who exceed 22GB of data usage in a billing cycle in the event of network congestion, so its definition of "unlimited" will be debated. However, Verizon said customers should not expect this de-prioritization to happen often.

Verizon said customers can add a smartwatch or other connected device for an extra $5 per month. TravelPass, offering customers 500MB per day of 4G LTE data while traveling outside of the United States, Canada, or Mexico, reduced to 2G speeds thereafter, is available for an extra $10 per day.

campingsk8er
Just had to double check the calendar to make sure it's not April Fool's Day.

At first I thought it meant it was $80 for unlimited data, but then saw it includes talk and text as well. So by my understanding, for me being on a solo plan I could get unlimited talk text and data for JUST $80 a month? That hardly seems true. What's the catch?
Score: 12 Votes (Like | Disagree)

cwagdev
TIL that a checkmark means there's a footnote.

Verizon Unlimited includes 10GB of 4G LTE tethering per month, with data reduced to 3G speeds after the 10GB of usage.
Score: 11 Votes (Like | Disagree)

Edward lake
De prioritise is a lovely euphemism. As in, I'm not ignoring my ex girlfriends calls i have just de prioritised them
Score: 11 Votes (Like | Disagree)

penajmz
Hmmm this could make me dump AT&T
Score: 10 Votes (Like | Disagree)

Why does this always have to come up? What does this have to do with anything? How much does your gas cost or all kinds of other things that are cheaper in US? How much larger of a network do US carriers have to create, maintain, and upgrade compared to Denmark? What's the pint of any of this? "'Sup" indeed.
Score: 10 Votes (Like | Disagree)
Read All Comments