Apple is scheduled to report its earnings results for the first quarter of the 2017 fiscal year at 1:30 p.m. Pacific Time today, revealing how much money it made between September 25 and December 31 of last year. The holiday shopping season typically makes this quarter Apple's most lucrative of the year. 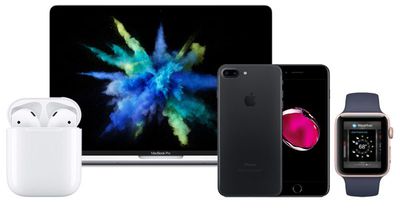 Apple benefitted from an extra week of sales in the quarter—14 versus the usual 13—due to a step it takes every 5 years or so to realign its September-ending fiscal quarter with the typical December-ending calendar quarter. Given the week fell between Christmas and the New Year, the seven extra days of sales could be significant.

The average expectation among Wall Street analysts is that Apple will report revenue around the $77 billion mark, or roughly the midpoint of Apple's guidance. Herein is a list of some of those predictions, ordered from lowest to highest, based on compiled averages and research notes obtained by MacRumors:

While iPhone sales dropped for the first time ever last year, the smartphone is still Apple's most important product by far—it accounted for 60% of the company's revenue last quarter. The consensus among analysts is that Apple will have sold around 76 million iPhones, up slightly from 74.8 million in the year-ago quarter.

Most analysts believe a higher ratio of customers purchased a Plus-sized iPhone this launch, with the dual-lens camera in particular enticing customers to choose the 5.5-inch model over the smaller iPhone 7.

Above Avalon analyst Neil Cybart estimates Apple sold 5.6 million Macs in the quarter, a 5% increase over the 5.3 million it sold in the year-ago period. The quarter was highlighted by the launch of long-awaited MacBook Pro with Touch Bar models in late October, which likely inflated sales.

iPad sales may remain on a longstanding downward trend based on units, but more expensive iPad Pro models have led to higher average selling prices and increased revenue for Apple's tablet business.

Cybart expects revenue from Apple's growing services category to rise to $6.7 billion, a 22% increase over the $6.1 billion it reported in the year-ago quarter. These earnings are derived from the App Store, iTunes, Apple Music, iCloud storage subscriptions, AppleCare, Apple Pay, licensing, and other services.

Investors will be looking closely at "Other Products" to measure the impact that Apple Watch Series 2 models and AirPods have on the category's revenue, which Cybart forecasts will rise 9% year-over-year. The category also includes sales of the Apple TV, Beats products, iPods, and many accessories.

Cybart expects Apple's guidance will point towards continued growth next quarter, suggesting the 2017 fiscal year will remain on an upward trend.

skippermonkey
Terrible news. It will just reinforce Cook's strategy and result in fewer computer products that Apple fans actually want to buy. I just want a new Mac Pro. Is that too much to ask of the richest company in the world? Windows here I come... (sadly)
Score: 43 Votes (Like | Disagree)

macbookhair
If you're squeezing every last ounce of profit out of a company, you can see great increases. However, the long term implications of doing so, especially when this is at the expense of product innovation and service quality, are decline and eventual financial difficulties as customer goodwill is lost and the company falls behind the market.

So even if the results are good, it's not necessarily evidence that Apple is going to be OK in the long term. Especially if they are still heavily reliant on the iPhone for much of that revenue. If we were seeing world-beating products and innovation from Apple. it would be different, but we haven't been.
Score: 39 Votes (Like | Disagree)

dumastudetto
Biggest ever earnings? That cannot be right. I've been told by many on here that Tim Cook is doing a terrible job and should be fired. #confused
Score: 35 Votes (Like | Disagree)

jscooper22
Good, take some of the money and build me a real pro machine for rendering and network services. Thanks.
Score: 24 Votes (Like | Disagree)

.
Will be a hoot watching the sad (watchbands, TC must be fired, Apple is doomed, emoji, margins, Apple is greedy, no "pro" machines, wah...where's my bottle and soft blankie) trying to explain the excellent results away.

Must be Apple withholding inventory again to stimulate demand and numbers, yeah, that's it... always a crowd pleaser for those unable to think rationally.

Why does everything have to be so black and white for some people? There's plenty of people who are pissed with Apples decision to basically abandon, or majorly neglect their desktop lineup for the sake of products which clearly net them higher margins such as iPhones, etc. Sure, they may be making more money. Great. That doesn't make me any less disappointed with their lineup of desktops. In fact it makes me even more disappointed that with so much wealth and resources behind them, that they're happy to just abandon the product line and customer base that helped get them where they are.

But I guess I best tow the line. Profits are good. Everything else is irrelevent.
Score: 20 Votes (Like | Disagree)

Oh no wait... Big earnings are a good thing.
Score: 14 Votes (Like | Disagree)
Read All Comments

Thursday August 18, 2022 4:25 pm PDT by Joe Rossignol
TikTok's custom in-app browser on iOS reportedly injects JavaScript code into external websites that allows TikTok to monitor "all keyboard inputs and taps" while a user is interacting with a given website, according to security researcher Felix Krause, but TikTok has reportedly denied that the code is used for malicious reasons. Krause said TikTok's in-app browser "subscribes" to all...
Read Full Article • 148 comments

Friday August 19, 2022 1:57 am PDT by Sami Fathi
Stage Manager in the iPadOS 16 beta is receiving heavy criticism for being "fundamentally misguided" in its approach to bringing a new level of multitasking to the iPad experience, with some even calling on Apple to delay the feature entirely due to its shortcomings. Federico Viticci, the founder and editor in chief of MacStories and a prominent member of the Apple community, outlined his...
Read Full Article • 244 comments