Lenovo recently announced a pair of docks in its "ThinkPad" accessory line, including one equipped with Thunderbolt 3 and one with USB-C (via Anandtech). The ThinkPad Thunderbolt 3 dock includes a Thunderbolt 3 port, two DisplayPort options, HDMI, VGA, Gigabit Ethernet, a headphone jack, and five USB-A 3.0 ports, with one that is always powered. 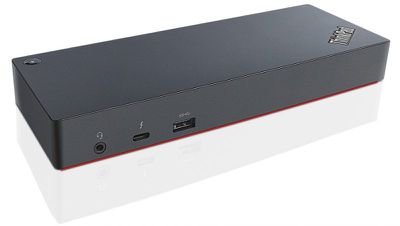 Both images show the ThinkPad Thunderbolt 3 dock
The company said that users can connect as many as three displays to the Thunderbolt 3 dock, with two coming off the dual DisplayPort streams, and another connected to an extra Thunderbolt 3 output. One display will get up to a 3840 x 2160 resolution at 60Hz, while two displays will have the same resolution at 30Hz. In terms of power, the dock comes with a 135W adapter, with up to 65W of power to a connected laptop. The Thunderbolt 3 dock is likely to work with the new Touch Bar MacBook Pro, but Lenovo hasn't specified compatibility yet.


The dock ships with a 135-Watt AC Adapter, which provides up to 65W of power to the laptop, and the remainder for powering the accessories. There is also a power button on the dock to control the ThinkPad power state when docked, which is nice since the laptop could easily be closed when docked.

The USB-C dock has a similar look and number of ports when compared to the Thunderbolt 3 version. It includes a single USB-C port, three USB-A 3.0 ports, two USB-A 2.0 ports, two DisplayPort options, VGA, Gigabit Ethernet, and a headphone jack. A single display can be driven with 3840 x 2160 resolution at 30Hz, or the dock can power two displays with 1920x1080 resolution at 60 Hz. The USB-C dock includes a 90W power adapter, with up to 60W of power to a connected laptop.

Users will be able to purchase the ThinkPad USB-C dock in January for $199.99, and the ThinkPad Thunderbolt 3 dock in February for $279.99. More information about the ThinkPad line, and other Lenovo products, is likely to be announced at CES in January.

True, but they (manufacturers) should have stopped including a VGA port on their devices a decade ago, yet we still see some coming out with new stuff that has VGA, WTF.

It's tough. Most businesses (mine included) still have VGA on our tables and workrooms. Visitors bring VGA projectors constantly.
Score: 9 Votes (Like | Disagree)

justperry
About time to drop VGA, yes, I know, businesses seem to still use them, but really, it should go like the Dodo/flash.
Score: 5 Votes (Like | Disagree)

It's tough. Most businesses (mine included) still have VGA on our tables and workrooms. Visitors bring VGA projectors constantly.

This 100%. I liken it to the 80/20 rule. 20% of businesses may upgrade to today's equipment and standards but 80% run perfectly fine on legacy equipment. The cost/benefit analysis tends to fall on the side of buying 100 1080p VGA monitors for $60 each instead of buying a lot fewer more expensive monitors.
Score: 5 Votes (Like | Disagree)

And VGA? Why? Is there really still that great a need for that port?

Anyway, OWC's looks like a better choice for Mac users. FireWire instead of VGA, card reader, digital audio out, looks better (comes in Space Gray), also coming in Feb. for the same price. The only thing I like better about this one is that it has multiple full-sized Displayports.
Score: 5 Votes (Like | Disagree)

DrumApple
Lenovo is doing great for hardcore business users. Apple, not so much. It's like they changed their target demographic to teenagers.
Score: 4 Votes (Like | Disagree)
Read All Comments

Saturday February 4, 2023 10:05 am PST by Eric Slivka
Online retailer TigerDirect has slashed pricing on the M1 iPad Air in several colors, offering the base 64GB configuration for just $313.99 in Purple and Pink. Note: MacRumors is an affiliate partner with TigerDirect. When you click a link and make a purchase, we may receive a small payment, which helps us keep the site running. That's a savings of 48% compared to Apple's normal $599.00...
Read Full Article • 413 comments

Sunday February 5, 2023 6:07 am PST by Joe Rossignol
Apple has discussed selling a new top-of-the-line iPhone alongside the Pro and Pro Max models in 2024 at the earliest, according to Bloomberg's Mark Gurman. Based on this timeframe, the device would be part of the iPhone 16 lineup or later. In a September 2022 edition of his weekly "Power On" newsletter, Gurman said there was "potential" for an iPhone 15 Ultra to replace the iPhone 15 Pro...
Read Full Article • 429 comments