Ahead of the launch of Super Mario Run on iOS later this week, Nintendo video game designer Shigeru Miyamoto sat down with video game site Glixel to share some thoughts on what it was like working with Apple.

According to Miyamoto, amid discussions about entering the mobile space, his team set out to build the simplest Mario game they could, doing away with a lot of the complexity that has been added over the years. 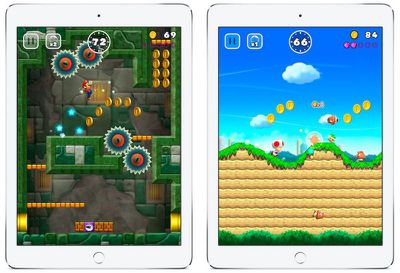 Apple was an ideal partner because Nintendo felt development support was necessary, and the partnership has led to some heavy promotion of Super Mario Run in the App Store and at Apple retail stores. Apple also helped Nintendo settle on an ideal pricing model after Nintendo shied away from freemium pricing.

For Nintendo, we have a lot of kids that play our products. It was important for us to be able to offer Super Mario Run in a way that parents would feel assured that they could buy the game and give it to their kids without having to worry about future transactions. From early on, I thought that Apple would be a good partner so we could work on this new approach.

Miyamoto also believes that Apple and Nintendo have a lot of common ground between them, focusing on how people use products and marketing products to a wide range of people. "They put a lot of effort into the interface and making the product simple to use, and that's very consistent with Nintendo," he said, likening a story about a Super NES controller with colored buttons to Apple's colorful Apple logo.

In the early days when computers were very complicated things, computer companies were purposely presenting them in ways that made them seem very complicated. Then you had Apple who came along with their very simple and colorful logo and it all had more of a fun feel to it.

Actually, this reminds me that with the Super NES controller we put the multicolored buttons on the face of the controller, and then the US office decided not to keep that. I told that story to Apple, and how I liked the use of color in their old logo. That was like a bridge that had been built between us.

Super Mario Run will be available on iOS devices starting on Thursday, December 15. Exclusive demos are available in Apple retail stores around the world ahead of the game's launch.


Super Mario Run will be free to download and try, but unlocking full gameplay will require users to pay $9.99. As was discovered last week, an always-on internet connection will be required for security purposes.

Miyamoto's full interview, which covers topics like his role on Nintendo's creative team, his hobbies, and his inspiration, can be read over at Glixel.

I really am looking forward to this. the price tag doesn't scare me away because I am willing to pay for quality. I appreciate that they offer a "trial" version for free.

I would happily pay the money, but the fact that a constant internet connection is required is a no-go. If I pay for it, I want to be able to play it offline.
Score: 26 Votes (Like | Disagree)

dwaltwhit
I really am looking forward to this. the price tag doesn't scare me away because I am willing to pay for quality. I appreciate that they offer a "trial" version for free.
Score: 24 Votes (Like | Disagree)

They lost me at always-on-internet. :(

They completely lost me at in-app-purchase. :mad:
Score: 24 Votes (Like | Disagree)

itsmilo
cant play it on the plane. What a flop
Score: 22 Votes (Like | Disagree)

BootsWalking
And just like Apple, Nintendo went overboard focusing on simplicity instead of technology which is why the Wii U was such an enormous flop.
Score: 17 Votes (Like | Disagree)
Read All Comments

Tuesday January 18, 2022 4:15 am PST by Tim Hardwick
Microsoft has released a new version of its Office for Mac productivity suite that includes an updated Excel app with 100% native support for Apple silicon machines. According to the release notes accompanying version 16.57, Excel will now run natively on Macs powered by Apple's M1-series processors without having to use the Rosetta 2 translation layer, which means anyone using a Mac with an ...
Read Full Article • 89 comments