Apple CEO Tim Cook is among a small group of tech leaders who plan to attend President-elect Donald Trump's reported tech summit at Trump Tower in Manhattan on Wednesday, according to Recode. 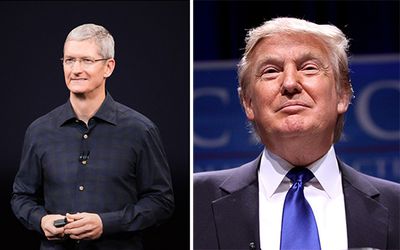 There could be a few other attendees, as invites reportedly continued to be sent by Trump's chief of staff Reince Priebus, son-in-law Jared Kushner, and presidential transition team adviser and tech investor Peter Thiel late into the week.

A handful of tech leaders have reportedly declined the invitation, as the report noted some of the technology companies and executives disagree with Trump on a myriad of key issues, ranging from encryption to immigration reform.

“Look, this is obviously a circus,” said one person close to the situation. “Everyone in tech just wants to be invisible right now when it comes to this administration, but has to participate since we have done it before.”

In addition, Twitter CEO Jack Dorsey has reportedly sent mixed signals about being invited or not. Reports are similarly conflicting about whether Tesla and SpaceX CEO Elon Musk will be in attendance.

The topics to be discussed at the roundtable meeting were not disclosed, but Trump has previously expressed his desires to reform the corporate tax code, reduce regulation, and negotiate better trade deals with other countries.

Trump previously said he plans to offer Apple a "very large tax cut" alongside "substantial regulation cuts" that will incentivize the iPhone maker to manufacture its products in the United States, rather than in China and other overseas countries.

"We're going to get Apple to start building their damn computers and things in this country instead of in other countries," said Trump, while campaigning at Liberty University in Virginia earlier this year.

Apple did reportedly ask its Taiwanese manufacturing partner Foxconn to study the possibility of moving iPhone production to the United States, although Foxconn chairman Terry Gou was said to be less enthusiastic about the idea due to inevitably higher production costs compared to China.

Meanwhile, Trump called for an Apple boycott after the company refused to comply with a court order to unlock the iPhone used by shooter Syed Farook in the San Bernardino attack last December. The FBI later dropped its lawsuit against Apple after reportedly turning to Israeli company Cellebrite to crack the iPhone.

Trump said Cook congratulated him on winning the election, but the Apple chief was personally a Hillary Clinton supporter. Following Trump's victory, Cook urged Apple employees to "move forward together" despite "uncertainties ahead."

jdillings
This has got to be both humbling and humiliating for all these CEOs who campaigned so heavily against him. And I love it.
Score: 94 Votes (Like | Disagree)

Quite simply, I don't want to align myself with any brand that actively cooperates with this racist, sexist, xenophobic bigot.

It's fine to passively get by under this administration, business is business. But don't entertain this moron. I hope Elon Musk gives him the middle finger.

Nr123*123
Quite simply, I don't want to align myself with any brand that actively cooperates with this racist, sexist, xenophobic bigot.

It's fine to passively get by under this administration, business is business. But don't entertain this moron. I hope Elon Musk gives him the middle finger.
Score: 34 Votes (Like | Disagree)

Quite simply, I don't want to align myself with any brand that actively cooperates with this racist, sexist, xenophobic bigot.

It's fine to passively get by under this administration, business is business. But don't entertain this moron. I hope Elon Musk gives him the middle finger.

Soni Sanjay
We need a leader like Steve Jobs, I don't imagine Cook doing anything interesting.
Score: 31 Votes (Like | Disagree)
Read All Comments