Apple manufacturing partner Foxconn is in preliminary stages to build a collection of assembly plants within the United States (via Reuters), potentially fulfilling President-elect Donald Trump's wish that Apple would move the majority of its manufacturing to the U.S. instead of overseas.

Foxconn decided to make a statement about its U.S. expansion after details of the move were picked up and shared by CNBC yesterday. The news alleged that Foxconn would be investing $7 billion into its U.S. expansion and aiming for the creation of 50,000 jobs within the country, all in the next four years. Foxconn simply stated that more details will come after its talks with "the relevant U.S. officials" are over. 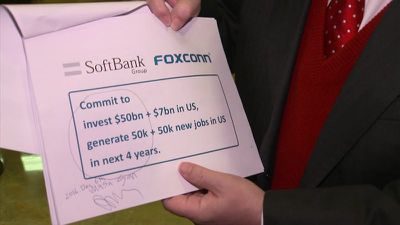 "While the scope of the potential investment has not been determined, we will announce the details of any plans following the completion of direct discussions between our leadership and the relevant US officials," the Foxconn statement said.

In the meetings with Donald Trump, Japan's SoftBank also looked towards U.S. expansion and pledged $50 billion in its investment stateside, along with 50,000 new jobs of its own, "a move the U.S. President-elect claimed was a direct result of his election win." In a call made to Trump by Apple CEO Tim Cook, Trump mentioned to the CEO that one of his goals and future achievements would be to "get Apple to build a big plant in the United States," by offering the company incentives and "a very large tax cut" to do so.

Cook was said to have remained neutral on the subject by saying "I understand that" in response to Trump, while Foxconn chairman Terry Gou is said to be less enthusiastic about the idea due to inevitably higher production costs compared to China. Cook explained one of the major reasons Apple's manufacturing is so heavily centered in China is due to the country's large number of individuals with the required "vocational kind of skills."

Foxconn does have manufacturing facilities on a very small scale in the U.S., in Virginia and Indiana, along with logistic locations in California and Texas. Apple has a comparably limited facility in Austin, Texas which manufactures the company's Mac Pro.

Rogifan
So things already in motion that Trump will take credit for. Just like the SoftBank announcement which we have very little details on. And the kool-aid drinkers will lap it up. Just last night on Fox News that clown Corey Lewandowski said people are allowed to say Merry Christmas again because Donald Trump was elected. This is the delusion of the Trump sycophants. They put Obama's hope and change brigade to shame.
Score: 22 Votes (Like | Disagree)

"a move the U.S. President-elect claimed was a direct result of his election win."

Correction: falsely claimed it was a result of his election win. The Japan SoftBank investment fund was formed and announced before the election:

If Apple starts manufacturing phones in the US means cheap Chinese smartphone stay at bay because their parts aren't worth the manufacturing costs.

So things already in motion that Trump will take credit for. Just like the SoftBank announcement which we have very little details on. And the kool-aid drinkers will lap it up. Just last night on Fox News that clown Corey Lewandowski said people are allowed to say Merry Christmas again because Donald Trump was elected. This is the delusion of the Trump sycophants. They put Obama's hope and change brigade to shame.

You don't live in this universe, do you? 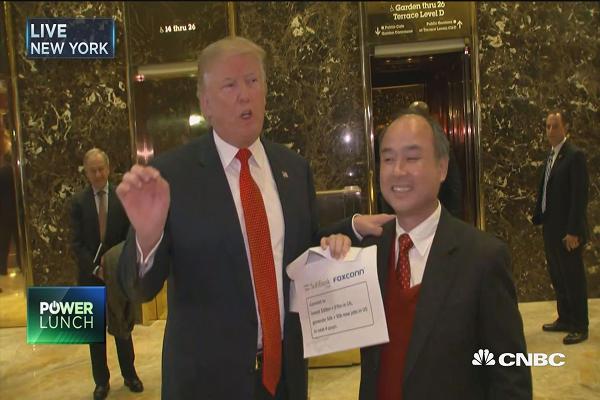 This is from CNBC even!

This is Mr. Trump and the Softbank guy, on Trump Tower, NYC.

So, this is completely President Obama's, right?
Score: 15 Votes (Like | Disagree)

meaning-matters
No matter what, Trump already gets things done.
Score: 14 Votes (Like | Disagree)

the8thark
Thank you Donald Trump.
My thanks to the the US nation for voting in Trump so he can get things like this done. 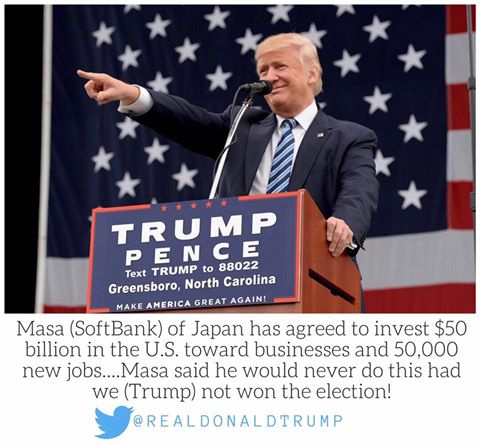 QFT. Trump's followers will believe it without a single question. The truth is no longer welcome.