Apple today published its top 2016 content picks for the iTunes Store and the App Store, choosing the best apps, music, movies, TV shows, podcasts, and books of the year.

"One Dance" from Drake was named Apple's Top Song of 2016, while Drake's "Views" Album was named the Top Album of the Year. Other top songs, which are available via an Apple Music playlist, include Rihanna's "Work," Flo Rida's "My House," The Chainsmokers' "Don't Let Me Down," Justin Timberlake's "Can't Stop the Feeling," and Calvin Harris' "This is What You Came For." 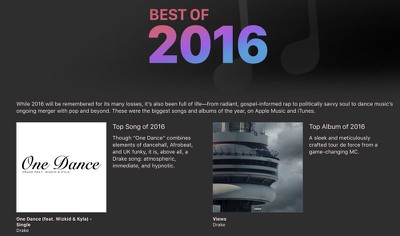 As for movies, Apple's editorial staff made the following picks:

Apple's chose the following TV shows as the best of the year:

Apple's choice for novel of the year is Michael Chabon's Moonglow, with additional picks as follows:

- Novel of the Year: Moonglow - Michael Chabon
- Nonfiction of the Year: Evicted - Matthew Desmond
- YA Novel of the Year: If I Was Your Girl - Meredith Russo
- Debut of the Year: Homegoing - Yaa Gyasi
- Mystery: Charcoal Joe - Walter Mosley
- Thriller: Behind Closed Doors - B.A. Paris
- Popular Fiction: Sweetbitter - Stephanie Danker
- Literary Fiction: What Is Not Your Is Not Yours - Helen Oyeyemi
- Fantasy: The Fate of the Tearling - Erika Johansen
- Kids: Raymie Nightingale - Kate DiCamillo
- Cookbook: Everything I Want to Eat - Jessica Koslow
- Graphic Novel: March: Book Three - John Lewis

Top overall podcasts based on most downloads were Fresh Air, Stuff You Should Know, Serial, This American Life, and The Joe Rogan Experience.

Apple's picks for top apps, which include Prisma and Clash Royale, can be found in a separate App Store article.

DrewDaHilp1
So since they acknowledged the top podcasts that means they acknowledge they still are in the podcasting business? Because their app says otherwise.
Score: 4 Votes (Like | Disagree)

God how can something be so terrible? I think I tried using the app again after the redesign, and good lord. What a useless, featureless pile of garbage. No real options for skipping forward or backwards, it's 15 seconds no matter what. Oh, want to skip using the controls on your headphones? Nope. Skip to the next episode.

Want to create a playlist?

It's literally the most basic possible offering Apple could shovel together. There is more complexity in their compass app, and considering they basically coined the friggin term... like, come on!

Anyway, I'm happy to see My Favorite Murder be mentioned here, it's easily my favourite podcast out of the far too many I listen to. But there are some stellar podcasts that I would have loved to see, Radiolab, and the new spinoff More Perfect (which is ridiculously fantastic), Invisibilia, Hello Internet ... but then I also realize I have some heavy biases there. Man podcasting is glorious these days.

Edit: I also am very thankful Apple recognized Kubo. I finally saw it a few weeks ago and man did I enjoy it. Sure, it's not the most challenging film, but I have loved so much of Laika's work (I still am blown away by Coraline every time I watch it) and I hate that they don't get enough recognition. Films like Paranorman get almost no attention, when a much lesser film like Frankenweenie is given headings of praise and brings home all the money.

I did laugh at the "indie" film selections, though. Hateful Eight? Listen, I loved the film and love Tarantino a ton, but if that's "indie", I'm living on the wrong planet.

Oh and if sausage party was the best comedy... was there just nothing else it was up against? I saw it in the theatre and I laughed, but "best" is really stretching it here.

I had exactly the same reaction to Sausage Party's inclusion and Hateful Eight, technically it's correct but well, yeah. The film selections were mostly right on though (other than sausage party). And even popularity of their "Indie" films, it makes me happy for the iTunes audience to see 'popular' and 'good' intersecting so well.

I liked Kubo but I wasn't a Coraline fan at all. Stylistically they're both great but the content of Coraline didn't speak to me.

I'm not as in alignment with them on the TV selections though but we have the wonderful challenge of having SO MUCH great television content today that it makes for a lot of fantastic picks and what makes one's top won't necessary match with another while both being excellent programs.

I'm also a Radiolab and Invisibilia fan, makes me think I should check out a couple of the other podcasts you've listed that I haven't thus far. I'm going to subscribe them now... :)
Score: 1 Votes (Like | Disagree)

adamjackson
Well, I'm officially out of touch with the rest of the world. I know Star Wars & I know Taylor Swift. every other name mentioned here is completely off my radar.

Giving up social media 4 years ago has been great but this list shows that I just don't have the exposure anymore that I used to. I'm undecided on this being a good thing or not.
Score: 1 Votes (Like | Disagree)
Read All Comments

Monday June 29, 2020 7:48 am PDT by Joe Rossignol
While the terms and conditions for Apple's new "Developer Transition Kit" forbid developers from running benchmarks on the modified Mac mini with an A12Z chip, it appears that results are beginning to surface anyhow. Image Credit: Radek Pietruszewski Geekbench results uploaded so far suggest that the A12Z-based Mac mini has average single-core and multi-core scores of 811 and 2,781...
Read Full Article • 423 comments