Ahead of the official launch of Single Sign-on on tvOS 10.1 and iOS 10.2 later this month, Apple has added a new App Store section (via reddit) with apps that support the feature for beta testers. The apps are categorized by supported TV providers, including DirecTV, Dish, Sling TV, Hotwire, and GVTC. 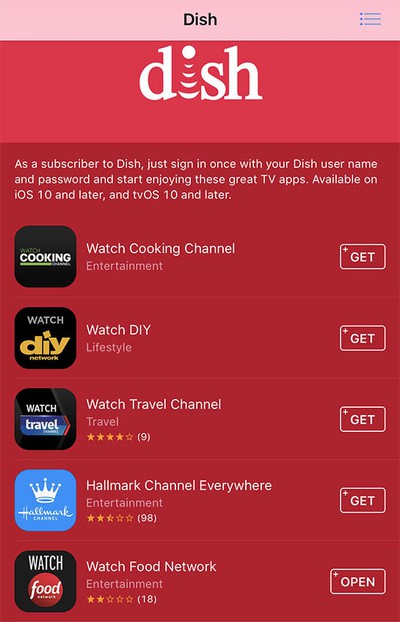 If you are a Dish Network satellite TV subscriber, for example, you can sign in once with your Dish username and password to start using any of the following apps, among others: Watch Cooking Channel, Watch DIY, Watch Travel Channel, Hallmark Channel Everywhere, and Watch Food Network.

When you open an app that supports Single Sign-on on iOS 10.2 beta, a pop-up alert asks if you "want to allow XYZ to use your sign in credentials," according to beta testers. If you decline, the app lets you sign in and authenticate with a provider-specific username and password as usual.

Single Sign-on will be available on tvOS 10.1 and iOS 10.2 in December upon completion of beta testing, enabling U.S. customers to sign in once with their cable TV credentials to access all live cable content available through their cable TV subscription, even when it is spread across multiple apps.

No I didn't. But the screenshot was taken from a post on Reddit. Which was linked under 'added a new App Store section ('https://www.reddit.com/r/apple/comments/5ggnn4/the_app_store_section_for_single_sign_on_is_now/')', rather deceptive to not actually cite the source. I guess since they cropped off the status and tab bars that makes is original and not worth citing.

Thanks for sticking up for me! That was my reddit post. They used my screenshot also, which is fine I guess. Might as well go all in! Here's a screen shot of the system alert. I quoted it slightly wrong but it is what it is.

You reported this to them? Is there a chance that they received several tips for the same topic?

I know what it feels like to want to help, only to have that help ignored or taken advantage of. I recently had an exchange with MacRumours reps and, despite dropping several hints that all I wanted to hear was "thanks for being a member of our community for 12 years", they resisted. Not a single thank-you came from that exchange.

No I didn't. But the screenshot was taken from a post on Reddit. Which was linked under 'added a new App Store section ('https://www.reddit.com/r/apple/comments/5ggnn4/the_app_store_section_for_single_sign_on_is_now/')', rather deceptive to not actually cite the source. I guess since they cropped off the status and tab bars that makes is original and not worth citing.
Score: 1 Votes (Like | Disagree)

Thanks for sticking up for me! That was my reddit post. They used my screenshot also, which is fine I guess. Might as well go all in! Here's a screen shot of the system alert. I quoted it slightly wrong but it is what it is.

No problem. The lack of providing sources here is getting to be ridiculous. MR used to be pretty good about it, but now it seems like they only cite 9to5mac because they are the only ones that can really stand up to them, everyone else they just bully around.
Score: 1 Votes (Like | Disagree)

Jeremy1026
I like how you tried to hide the original source instead of actually giving credit.
Score: 1 Votes (Like | Disagree)
Read All Comments