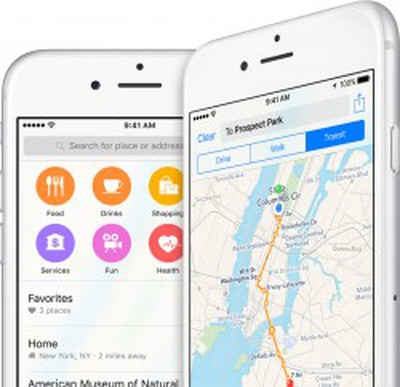 Apple is putting together a team of robotics and data-collection experts who will use drones, and "new indoor navigation features," to bolster and further improve the quality of Apple Maps. The move is said to be positioned as a method to catch up with Google, the longtime leader in the mapping field (via Bloomberg).

The drones will be able to capture and update Apple Maps at a far quicker rate than Apple's collection of GPS data-collecting minivans, which began appearing in the United States in early 2015.

In addition, a new feature is said to be coming to Maps that will let users view the insides of buildings, thanks to its Indoor.io and WifiSLAM acquisitions, and overall improvements will be made to navigation within the app.

Apple wants to fly drones around to do things like examine street signs, track changes to roads and monitor if areas are under construction, the person said. The data collected would be sent to Apple teams that rapidly update the Maps app to provide fresh information to users, the person added.

According to documents gathered by Bloomberg News, Apple already filed for an exemption from the Federal Aviation Administration to be able to fly drones for commercial purposes, and was granted approval to "operate an unmanned aircraft system to conduct data collection, photography, and videography." According to current rules, Apple's drone fleet would be restricted from flying over people and buildings, would be designated to operate only in daytime, and could only be flown by licensed pilots.

One of the pilots is said to have already been hired from Amazon's fledgling Prime Air program, and they will join the Apple Maps drone team at its base in Seattle, Washington. The indoor mapping initiative is said to be moving forward at the same pace as the drone fleet, with Apple's hope being to help customers navigate airports "and other high-traffic buildings like museums" using their iPhones. This feature, along with a Maps update that will provide users "better guidance for changing lanes while driving," is believed to launch next year.

freediverx
Apple doesn't need drones. What they need is to pay for up-to-date satellite imagery like Google does. This would be a pretty bad situation if Apple were a tiny start-up with limited capital. But it's sad and embarrassing that the world's largest company by market cap is too stingy to pay for current satellite images.

In downtown Miami, for example, Apple Maps still shows numerous city blocks as parking lots where we now have high rise condos, hotels, and retail developments (one of which will soon host Apple's largest store in Florida.) Some of these satellite images are over five years old.

Here are Google's and Apple's map views of the Met3 building completed two years ago: 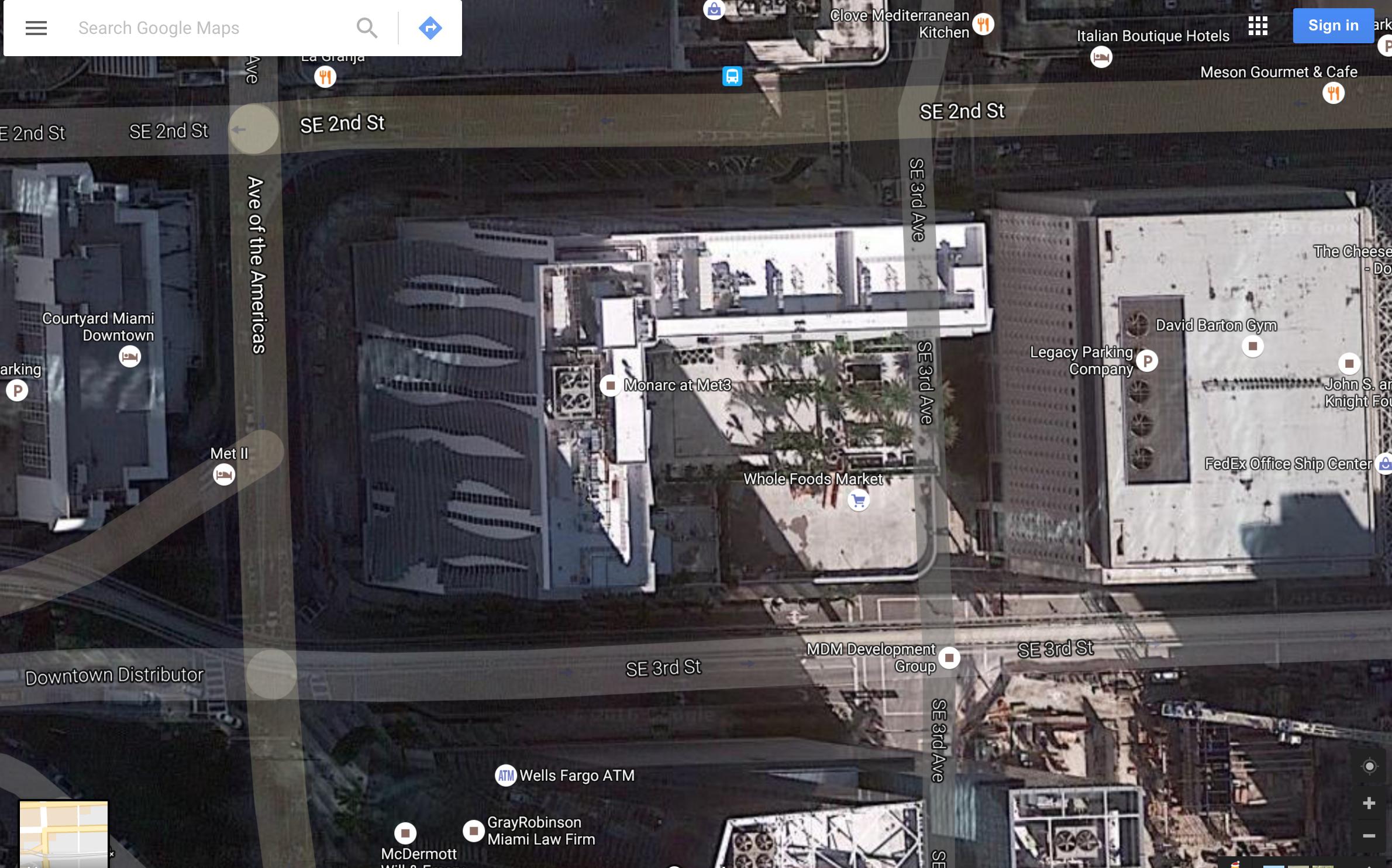 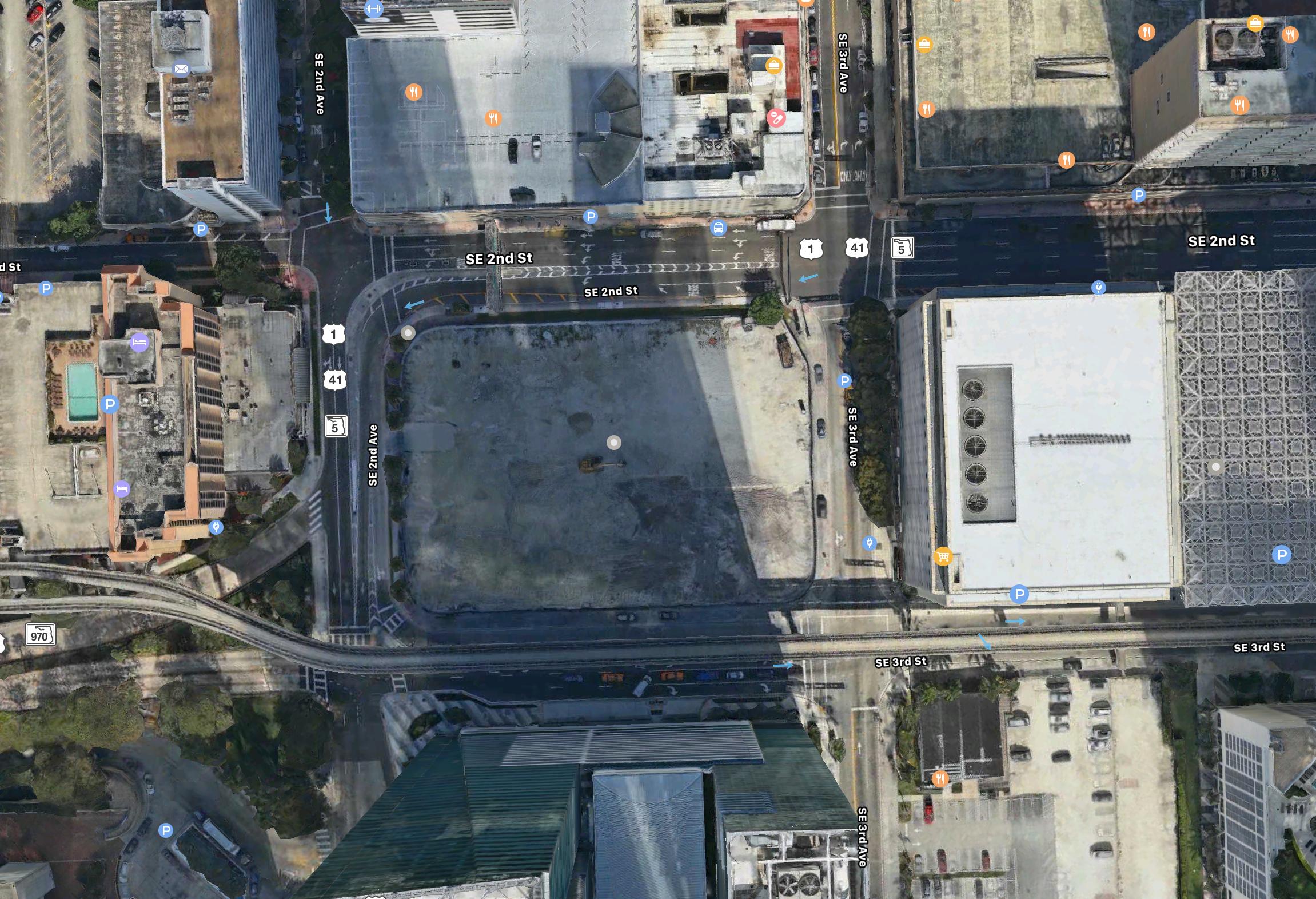 DaPizzaMan
Anything and everything they do to improve Apple Maps is welcome, whether they are behind or not.
Score: 31 Votes (Like | Disagree)

Cineplex
I'm sorry but if you need your iPhone to navigate the interior of an airport...you are just useless and sad. There are things called signs that have worked for hundreds of years. If people looked away from their phones for five minutes they might learn how to move from room to room.

And don't bother telling me Airports are hard to navigate...I've been to many Airports all over the world and in the US. I've never had a problem finding my way. They are not hay mazes.
Score: 26 Votes (Like | Disagree)

al256
I'm honestly not sure anymore how many Apple products I'll be using in the next two to three years. Better map data isn't going to change that either.
Score: 25 Votes (Like | Disagree)

NoNothing
Apple's map UI with Google's data would be a nice merge. Google's map UI has become a complete FUBAR on both their web and native apps.
Score: 21 Votes (Like | Disagree)

Friday July 23, 2021 9:37 am PDT by Juli Clover
Apple is developing an external display that includes an A13 chip with Neural Engine, according to a new rumor from 9to5Mac. The A13 chip with Neural Engine would presumably serve as an eGPU, though details are light at this time. Having a CPU/GPU built into the external display could help Macs deliver high-resolution graphics without using all the resources of the computer's internal chip....
Read Full Article • 225 comments

Saturday July 24, 2021 6:00 am PDT by MacRumors Staff
Apple's new MagSafe Battery Pack is now available, and we went hands-on this week for some early impressions of the new accessory to get more battery life out of Apple's iPhone 12 lineup. Subscribe to the MacRumors YouTube channel for more videos. This week also saw a number of rumors about the upcoming redesigned MacBook Pro models, the iPhone 13 lineup, the next-generation iPad mini, a new...
Read Full Article • 43 comments