macOS Sierra 10.12.1 is available for free to all customers who are running macOS Sierra. It can be downloaded from the Software Update function in the Mac App Store. 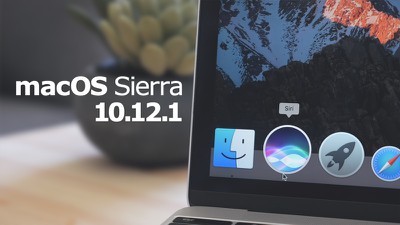 macOS Sierra 10.12.1 features few outward-facing changes, instead focusing on bug fixes and improvements to address issues that have surfaced since the release of the operating system. It does include Photos support for the new iPhone 7 Plus Portrait feature introduced with iOS 10.1, and it also includes features designed for next-generation MacBook Pro models that are set to be released later this year. Here's a full list of changes:

Apple has been on an accelerated timeline to get macOS Sierra 10.12.1 released, and it has likely already been sent to Apple's supply chain partners to be installed on new machines. New MacBook Pro models could be ready to launch as soon as late October.

macOS Sierra is a major operating system update that introduces Siri support, cross device copy paste options, new storage optimization tools, auto unlocking with the Apple Watch, and more. For full details on the features that are new in macOS Sierra, make sure to check out our full macOS Sierra roundup.

JetLaw
...So the headline doesn't really match up with the content of the article. C'mon, MacRumors, I expect more from you than this. The people who read your site are enthusiasts, we'll read the articles that you post about an OS update without you click-baiting us.
Score: 22 Votes (Like | Disagree)

idunn
Speaking of actual 'improvements,' there was Snow Leopard (10.6).
Score: 17 Votes (Like | Disagree)

rofl get with the times already..

bet you still use xp lmao

I loved Snow Leopard, I think it was probably the most stable of all the OS Xs.
Score: 16 Votes (Like | Disagree)

jmh600cbr
what features for new macs?
Score: 15 Votes (Like | Disagree)

For the brave ones - as usual let us know how it goes!

Bricked Mac. Ejected warp core. Resulted in temporal rift. Went back in time. Stopped myself from updating. Panicked in seeing my future self and clicked 'Update' regardless. Time paradox created.

otternonsense
The most magical release of Sierra yet.

I hope they debugged the hell out of Safari. It's been a pain to use.
Score: 13 Votes (Like | Disagree)
Read All Comments