Apple today released iOS 10.1 to the public, marking the first major update to the iOS 10 operating system that launched on September 13. In testing since September 21, iOS 10.1 saw Apple release five betas to developers and public beta testers before its public debut. 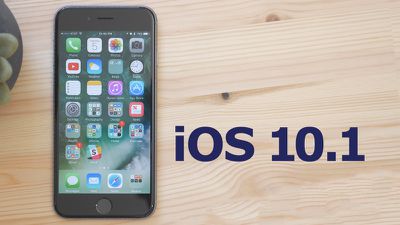 iOS 10.1 introduces a new "Portrait" mode, designed to take advantage of the two cameras included in the iPhone 7 Plus, released in September. Portrait mode uses the wide-angle and telephoto lenses in the iPhone 7 Plus to create shallow depth of field portrait photos with blurred backgrounds.

To achieve the blurred look, the image signal processor in the device uses the wide-angle camera to create a depth map while the telephoto captures an image, dissecting the different layers of the photo to decide what to blur with an artful "bokeh" effect. It works on people, pets, and objects, but it does require good lighting to achieve the proper results.

Subscribe to the MacRumors YouTube channel for more videos.
The update also offers a long list of bug fixes and other under-the-hood improvements to address many problems that have been uncovered since iOS 10 was released, and it also brings Transit directions to Japan for the first time.

iOS 10 has been described by Apple as the "biggest release ever" for iOS users, with features that include a redesigned Lock screen, a Siri SDK to allow third-party apps to integrate with Siri, and a completely overhauled Messages app with stickers, a full App Store, Digital Touch, Bubble Effects, and more.

Update: Today's update also fixes pairing issues some Android Wear users were having with the iPhone 7 and 7 Plus.

cableguy84
So pleased with this update, updated 10 minutes ago, my battery has lasted 2 full days on one charge
Score: 17 Votes (Like | Disagree)

Why would the 7+ get portrait mode but not 6S+? What is the difference between these two phones that makes portrait mode work ONLY in 7+ and not 6S+? Apple sucks.

Did you ever stop and think maybe the fact that the Portrait Mode requires two cameras shooting simultaneously might be the reason?
Score: 15 Votes (Like | Disagree)

Moorepheus
Ok, updating now, I know, I didn't learn my lesson when 10 first came out and I tried to upgrade my 6s+. Anyway, first apple Logo has popped up. Anyway, what I don't get, is why are people so lazy to read what is in the update. Half the posts here are asking if a bug was fixed, music star rating fixed, etc. Why don't you read the release notes, it tells you everything. Why should anyone have to repost it, when it's on your phone and even in the OP. Anyway, done ranting about the lazy people. But for those who were too lazy not to read the OP, here is the list again, my guess, is you will still be too lazy to read everything

Camera and Photos
- Introduces Portrait Camera for iPhone 7 Plus that creates a depth effect that keeps your subject sharp while creating a beautifully blurred background (beta)
- People names in the Photos app are saved in iCloud ('https://www.macrumors.com/roundup/icloud/') backups
- Improved the display of wide color gamut photos in the grid views of the Photos app
- Fixes an issue where opening the Camera app would show a blurred or flashing screen for some users
- Fixes an issue that caused Photos to quit for some users when turning on iCloud Photo Library ('https://www.macrumors.com/roundup/icloud-photo-library/')

Eazy502E
Still no Mark as Unread / Flag marker in Messages. Please tell me I'm not the only one who needs a visual reminder to respond to text messages I read and then cleared the notification for?
Score: 9 Votes (Like | Disagree)

Why would the 7+ get portrait mode but not 6S+? What is the difference between these two phones that makes portrait mode work ONLY in 7+ and not 6S+? Apple sucks.

Agreed—because this software update should have added a second camera and an extra GB of RAM to older models.
Score: 9 Votes (Like | Disagree)
Read All Comments