Apple today sent out media invites for a Mac-centric event that will be held on Thursday, October 27 at 10:00 a.m. at Apple's Cupertino campus.

The October event is expected to focus on the introduction of new Macs, headlined by a much-rumored and highly anticipated revamped MacBook Pro. According to rumors, the new MacBook Pro will feature the first redesign to the machine since 2012. 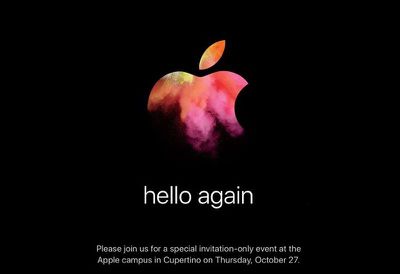 A thinner, lighter body is expected, with a wider, pressure-sensitive trackpad and a flatter MacBook-style keyboard with the same butterfly key mechanism. The MacBook Pro will be available in the same 13 and 15-inch size options, and will feature USB-C with USB 3.1 support for faster transfer speeds, Thunderbolt 3, and Touch ID.

Touch ID is expected to be built into a new OLED touch panel built into the top of the MacBook Pro, where it will replace the physical function key row. The OLED touch panel is said to feature contextual buttons that will change based on each app that's in use. A leaked chassis suggests it will feature four USB-C ports and a headphone jack, but no HDMI port, no USB-A ports, no MagSafe connector, and no SD card slot.

Subscribe to the MacRumors YouTube channel for more videos.
A refreshed 13-inch MacBook Air with USB-C ports has also been rumored, but it is not clear if other internal changes will be made to Apple's low-cost machine. It's possible the 13-inch MacBook Air will be a standalone product going forward, based on rumors suggesting the 11-inch model will be discontinued.

Apple is also said to be working on updated iMacs with AMD graphics chips, which could be introduced at the event, and we might possibly see the debut of a rumored 5K Retina display with an integrated GPU. Apple discontinued the original Thunderbolt Display earlier this year, but an updated product has been in the works and it makes sense to release it alongside refreshed Macs if it's ready to launch.

Apple's Mac Pro and Mac mini are in dire need of refreshes, having been updated last in 2013 and 2014, respectively, but it is not clear if these machines will also see updates at the event.

MacRumors plans to provide live coverage of Apple's October 27 event, both here on MacRumors.com and through our MacRumorsLive Twitter account. Apple will also live stream the event on its website and on the Apple TV.

jdillings
My credit card and dongles are ready
Score: 139 Votes (Like | Disagree)

Because after removing the headphone jack, Apple will remove the SHIFT and CAPS LOCK keys.
Score: 95 Votes (Like | Disagree)

Janichsan
The ironic twist: they will talk two hours about nothing but watch bands...
Score: 92 Votes (Like | Disagree)

garirry
Mac Pro better be updated or else I'll just