Apple revamped its retail stores last year by removing iPad smart signage and demoting iPod display models to side shelves, and now the company has another move up its sleeves in a push towards simplicity. 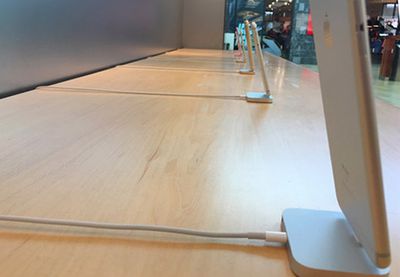 MacRumors has learned of at least two other stores in the United Kingdom where the security tethers, which activate audible alarms when disconnected, have been removed, and it appears likely the change will be phased in at other locations.

The courageous move effectively allows customers to walk into an Apple retail store, pick up an iPhone display model, and walk out with the device without paying, but Apple evidently feels the untethered experience is worth the risk.

iPhone display models with security tethers (Image: Mirror.co.uk)
As CNET explains, Apple wants customers to be able to hold an iPhone properly, try out cases, and even pocket the device:

Apple says this is to allow people to hold them properly, try cases on them and even see how they feel in your pocket. It's a bold move, especially given the lack of visible security in the building. We couldn't spot a single CCTV camera, although any phone taken out of the store will set off an alarm. If not returned, the phones will also be rendered unusable.

The customers who do attempt to steal iPhone display models, if not caught by security or CCTV cameras where installed, will walk away with unusable devices, as Apple will place them into Lost Mode remotely using Find My iPhone.

Apple continues to use security tethers on larger products such as MacBook and iPad display models.

PBRsg
Instead they will explode like a Note 7 if you take them out of the store.
Score: 77 Votes (Like | Disagree)

krause734
They should have a self destruct feature. Or did Samsung patent that?
Score: 47 Votes (Like | Disagree)

pshifrin
Don't take one past the great seal!
Score: 44 Votes (Like | Disagree)

Paradoxally
Good luck trying to steal those. You'll have a dead phone by nightfall.
Score: 31 Votes (Like | Disagree)

MysteryMii215
Apple has now made it easier to steal their iPhones from their stores!

Edit: (Note to self: Always read the entire article before commenting.)
Score: 23 Votes (Like | Disagree)

The courageous move effectively allows customers to walk into an Apple retail store, pick up an iPhone display model, and walk out with the device without paying, but Apple evidently feels the untethered experience is worth the risk.

Gosh! So much courage lately. But no amount of courage on Apple's part can match the courage of people who bought the Galaxy Note 7. ..
Score: 21 Votes (Like | Disagree)
Read All Comments

Monday June 27, 2022 7:31 am PDT by Joe Rossignol
TSMC will manufacture Apple's upcoming "M2 Pro" and "M3" chips based on its 3nm process, according to Taiwanese industry publication DigiTimes. "Apple reportedly has booked TSMC capacity for its upcoming 3nm M3 and M2 Pro processors," said DigiTimes, in a report focused on competition between chipmakers like TSMC and Samsung to secure 3nm chip orders. As expected, the report said TSMC will...
Read Full Article • 149 comments

Monday June 27, 2022 3:38 am PDT by Tim Hardwick
Polish developer Michał Gapiński has released a new and improved version of his "Tesla Android Project" which brings Apple's CarPlay experience to more Tesla vehicles than ever before. According to Gapiński, version 2022.25.1 provides "100% functional CarPlay integration for any Tesla," and comes with several new features and bug fixes. The project now supports DRM video playback so that...
Read Full Article • 155 comments