While on a visit to Japan, Apple CEO Tim Cook met with Nintendo's legendary game designer Shigeru Miyamoto. Earlier this morning, Cook posted a good morning greeting from the county alongside a picture of him walking through torii, traditional Japanese gates that are often posted outside of shrines. 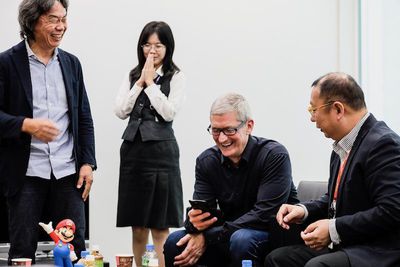 Photo via Tim Cook
Cook tweeted that he was learning how to play the upcoming Super Mario Run as he met with Miyamoto and his team at Nintendo's Kyoto headquarters. Miyamoto appeared at Apple's September special event and announced that the new game would appear on iOS by the end of the year.

Nintendo had consistently refused to license its intellectual property to other platforms, fearing that it would threaten its console and handheld-based business model. However, in early 2015 it changed its mind, announcing that it would partner with Japanese mobile game make DeNA to release 5 mobile games by March 2017.

Miyamoto says the Japanese game maker had realized that most children's first interaction with technology is more likely to be a parent's smartphone than one of its game consoles. By putting simple games based on its biggest characters, like Mario, on mobile devices the company hopes that it can convince players to migrate over to its first-party hardware for more complex experiences.

In addition to Super Mario Run, Nintendo and DeNA plan to release Animal Crossing and Fire Emblem this fall, though details for the latter two games have been scarce thus far.

Cook's Japan trip comes shortly after the CEO made a stop in Shenzhen, China, announcing that Apple would be opening a new research and development center in the city. It's unclear what else Cook has planned during his Japan trip.

MH01
Timmy, the worlds social butterfly . Apple could also learn from Nintendo what happens when you stagnate your hardware .

Hardware your company was built on.
Score: 39 Votes (Like | Disagree)

Uni Grad
Im sure this was what they were actually laughing about!

Read from right to left (like a Japanese manga): 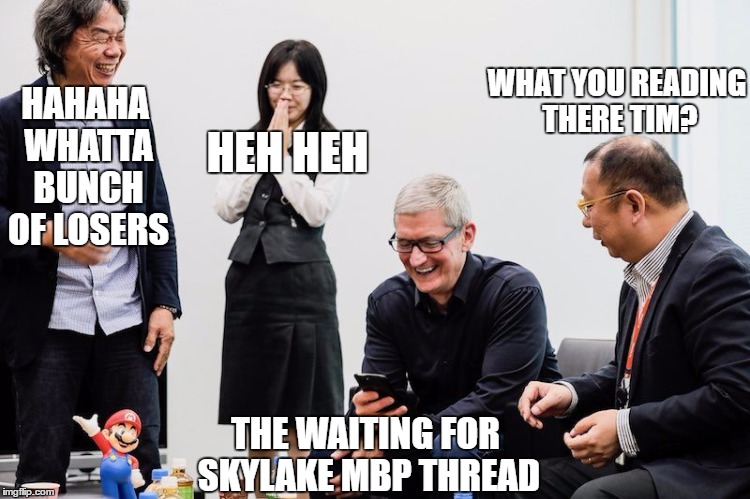 Edit: Getting really tired of seeing these 'dog & pony' shows in Japan & China. Let's get back to Cupertino, finish the spaceship and back to business.
Score: 23 Votes (Like | Disagree)

otternonsense
Seems to me Cook has been chasing distractions because he doesn't even like what he does. I don't mean to say he doesn't work hard. But he is foreign to the league of leaders like Steve Jobs and Shigeru Miyamoto, visionaries driven by love, passion, who poured their souls into making their companies what they are today. Tim picked up a company with the momentum of a rocket mid-flight, and is working day and night to "optimise" and profit.

Think about it, and how it reflects on Apple's products. Cycle by cycle they have stabilised into rather basic, unsurprising consumer electronics. They can never reach Steve's level because there's just no love in making them. You could feel it with an iMac G4 or iPhone 4. Walk into an immaculate Apple Store now to be surrounded by rows of soulless gadgets signed off by a workaholic accountant with a thing for fitness.

Maybe the best thing Cook can do is indeed resign and pass Apple's reigns to someone with real love for technology, design and innovation.
Score: 17 Votes (Like | Disagree)

Nr123*123
What are these "Macbooks" people keep talking about? Apple makes great emojis and are so proud of it. Here's last year's phone and some terrible music.
Score: 16 Votes (Like | Disagree)

typographer
It is time for Apple return to Mac.
Score: 14 Votes (Like | Disagree)
Read All Comments