Wednesday September 28, 2016 11:46 am PDT by Juli Clover
Just over two weeks after iOS 10 was released to the public, its adoption rate has reached 48.16 percent, successfully overtaking iOS 9, according to data obtained from Mixpanel's iOS 10 adoption tracker. 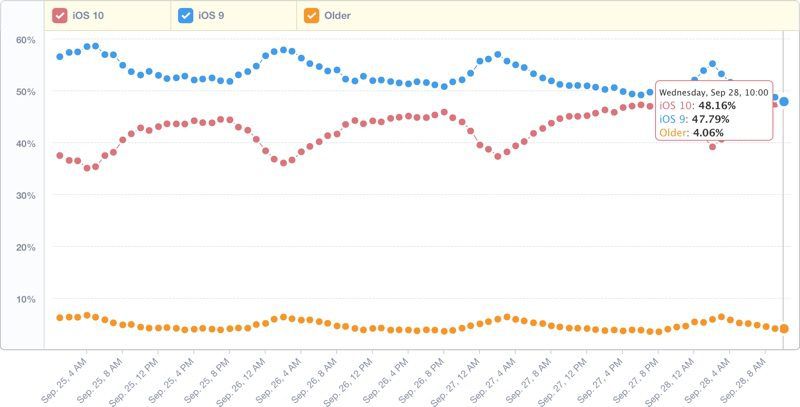 Since iOS 10 was released, its adoption numbers have been growing steadily and have been almost on pace with iOS 9 adoption rates during this time last year. One day after release, iOS 10 was installed on 14.5 percent of devices, and at just under one week, following the release of the iPhone 7 and iPhone 7 Plus, it was installed on 34 percent of devices.

iOS 10 saw some early installation issues that may have made people wary of downloading the update, but its steady growth can be attributed to the many appealing features it offers, including a revamped Messages app with stickers and a full App Store, a Siri API for developers, a redesigned Lock Screen experience, a new Music app, new facial and object recognition capabilities in Photos, and more.

Last year, less than two weeks after iOS 9 was released, Apple said it was installed on more than 50 percent of active devices, making it the operating system with the fastest ever adoption rates. Based on Mixpanel's numbers, it doesn't appear iOS 10 has outpaced it, but it did come close. 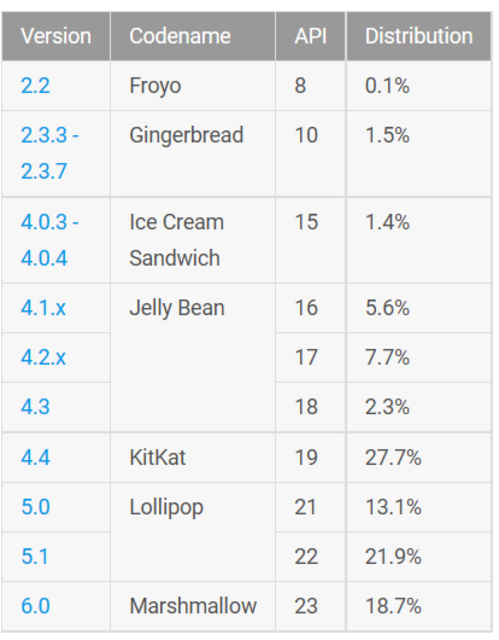 Back to the annoying and unblockable daily forced install IOS10 now or remind me later spam pop ups.

Hahaha, yes! You'll join us in the 48% soon enough! Come on, we've got a new messages app and a slightly annoying lock screen! It only hurts for the first few days…

powertoold
Its growth can be attributed to constant nagging.
Rating: 12 Votes

melendezest
Wake me up when Apple rescinds this "forced" update policy and allows me to install the software that came with my device, and up to what's supported, so that I can determine the sweet spot.

That is my single biggest gripe with Apple and I will not buy any new iOS device until this is rescinded.

But damn it's hard to resist the temptation (that gloss black iPhone sure is badass lookin')..
Rating: 11 Votes

These articles are silly. Apple controls how fast adoption is. All they have to do to increase the adoption rate is send out upgrade notifications more frequently.

No, they're absolutely not silly. Having as many people as possible running the latest release of the OS means the users are more secure from attack vectors that have been patched, and developers can focus more of their efforts on supporting the latest OS version.

This is an area of considerable importance - it's not just a nice thing to have, and it doesn't just affect each user individually, but the userbase as a whole, sort of like herd immunity - and it's an area where iOS completely spanks Android, given that many Android phone makers and/or carriers can't be bothered to provide an upgrade path for many of their phones, so most users will never be allowed to run the latest OS (unless they buy an entirely new Android phone).
[doublepost=1475091140][/doublepost]

Only 3 years old? It's a good thing that the bad guys haven't spent any time looking for holes to exploit in the past 3 years.
Rating: 10 Votes

ArtOfWarfare
These articles are silly. Apple controls how fast adoption is. All they have to do to increase the adoption rate is send out upgrade notifications more frequently.
Rating: 8 Votes

garirry
iOS 10 is a fantastic update in my opinion, so I think that it deserves the high adoption rate. But it won't stay extremely high regardless due to the amount of devices like the 4S and iPad 2 which can't upgrade to it.
Rating: 7 Votes

sigh... I miss the old days when actual Mac stories filled MacRumors site. I understand that iPhone takes up majority of Apple profits, but I am at the same time surprised that the company is so slow at merging the iPhone/iPad environment with Mac. iPhone and iPad are meant to boost Mac, not cannibalize them. I just miss the computer focus these days.
#anotherRantonMac


Well, that would require Apple to release some Macs with proper upgrades at a steady pace.
Rating: 6 Votes

macs4nw
Apparently many people are tired of those annoying pop-ups gently 'reminding' us to upgrade.
Rating: 6 Votes