iOS 10 has now been available for just under a week, and its adoption rate has been growing at a steady pace over the course of the last few days. According to data gathered by Mixpanel, iOS 10 is now installed on nearly 34 percent of devices. 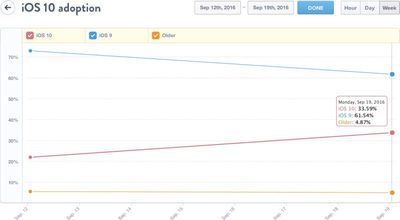 24 hours after iOS 10 was released, it was installed on 14.45 percent of devices, slightly outpacing iOS 9 adoption rates in the year prior. iOS 10 includes many appealing features that encouraged people to upgrade immediately, like a revamped Messages app with stickers and a full App Store, a Siri API for developers, a redesigned Lock screen experience, a new Music app, new facial and object recognition capabilities in Photos, and more.

iOS 10 did, however, see some installation issues early on that may have made people wary of downloading the update, but those problems are now resolved and customers should see no problems downloading the new operating system.

Given iOS 10's steady growth, it could potentially overtake iOS 9 as the operating system with the fastest adoption rates. Last year, less than two weeks after it was released, Apple said iOS 9 was installed on more than 50 percent of active devices, the quickest adoption rates it had seen for an iOS update.

If iOS 10 adoption grows by another 16 percent over the next week, it should take the title of fastest adopted software update ever.

pcmacgamer
Been running it for a few months now. Most the people I know haven't updated as they don't see any great new features that push them to upgrade. Aside from the messages app and photos app enhancements nothing of real value was gained in this update.
Score: 14 Votes (Like | Disagree)

Schwyz
Normally I would take a jab at Android... but this time iOS is hotter than the Note 7.

MRNopers
Funny that the "Older" statistic is higher than the % of devices running the newest version of Android.
Score: 6 Votes (Like | Disagree)

Been running it for a few months now. Most the people I know haven't updated as they don't see any great new features that push them to upgrade. Aside from the messages app and photos app enhancements nothing of real value was gained in this update.

There we go again... what you use your phone for?

Widgets are better, Maps is better, unlock screen is better, keyboard is better, Safari is better, control center is better, there are so much much things that are better. On top of that, security updates.

The only reason not to update are those people that jailbreak so they can install pirated apps.
Score: 5 Votes (Like | Disagree)

Jsameds
I always find it amusing how planned obsolescence is associated with iPhones yet their hardware is the longest supported in the industry.

It irks me in the same way how Apple are the only ones criticised by the media for using Chinese factories yet they are seemingly the only company of many to use said factories to be actively doing things to improve the working conditions there.
Score: 5 Votes (Like | Disagree)
Read All Comments