Apple has announced a grand reopening date of September 24 for four of its U.S. retail locations, including stores at Market Common Clarendon in Arlington, Virginia, Brea Mall in Brea, California, Arrowhead Towne Center in Glendale, Arizona, and Stoneridge Shopping Center in Pleasanton, California. Apple's new store in Birmingham, England will also open on the same day while its Bullring store permanently closes.

Each store will open this Saturday at 10:00 a.m. local time, complete with Apple's next-generation retail layout, including The Avenue, Genius Grove, The Forum, The Plaza, and The Boardroom, coupled with some combination of large glass doors, sequoia wood shelves, indoor trees, light boxes extending the length of the ceiling, and large digital screens for product marketing. 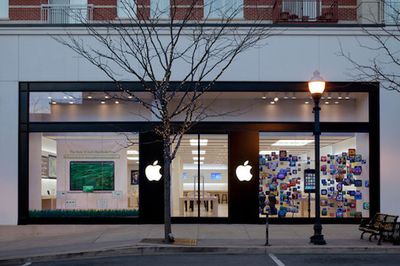 Apple Brea Mall will be moving to a new space within the shopping mall, and Apple Arrowhead will be relocating to a new unit within its outdoor shopping center. Likewise, Apple Stoneridge will be moving into a larger 9,991-square-foot space recently vacated by clothing retailer Abercrombie & Fitch, according to building permits filed with the City of Pleasanton earlier this year.

Apple is in the process of renovating several of its stores with next-generation designs inspired by Jony Ive, with progress ramping up ahead of the holiday shopping season. All new stores opened since mid 2015 share the revamped design language, including the latest flagship locations at Union Square in San Francisco and at the World Trade Center transit hub in New York City.

jonnysods
You guys all make me laugh. We're all so jaded now!
Score: 2 Votes (Like | Disagree)

Mac'nCheese
I would love it if the new stores had new iMacs.
Score: 2 Votes (Like | Disagree)

Chupa Chupa
Finally indoor trees! Perfect for those who are afraid of going outside.
Score: 1 Votes (Like | Disagree)

Born Again
i hate going to the apple stores.

i only go when there is something wrong with my iphone.
Score: 1 Votes (Like | Disagree)

The original design had color, interesting and inspiring signs, and cute desks with round chairs for kids to sit at. It was inclusive and felt like it was bringing people together.

I fondly remember those days. When ever i visited the mall, I would stop in the Apple store and listen to conversations between geniuses and customers/potential customers and learn new tricks. I would sometimes time my visits with presentations on advanced tricks of iMovie, Keynote or Adobe products. Those in-store presentations were also a great opportunity to network with other professionals for both work and share techniques.

The original stores were very inviting and many visitors felt they could hang out and learn. Several of the stores I entered even had presentation areas where experts would explain how to do advanced tasks with Apple applications and select third-party apps. All of these things brought people in and they eventually bought products. It was also a time when geniuses appeared to have total expertise over the Macintosh's and how they were used. Customers at the time appeared to be much more interested in using the products to produce content.

Those were the earlier days when Apple executives felt they needed to woo people in and soft sell the products. Before the days popular days of the iPod.

What was discovered is that the stores would fill up with people not buying things and some potential customers would not want to enter the crowded stores. Its a hard numbers game now and reaching measurable and definable sales goals.

Those stores always felt crowded, but they were also fun. Now, they feel cold and lack personality. Of course the goal of the store, any store, is to sell and move product. And they do seem to be meeting that goal, otherwise the executives would not likely be making the changes that they are.
Score: 1 Votes (Like | Disagree)
Read All Comments

Sunday October 2, 2022 6:41 am PDT by Joe Rossignol
Apple is developing new iPad Pro, Mac, and Apple TV models, and at least some of these products will be released in October, according to Bloomberg's Mark Gurman. However, Gurman continues to believe that Apple is unlikely to hold an event this month. In the latest edition of his Power On newsletter, Gurman said "the big iPhone 14 unveiling last month was probably it for Apple in 2022 in...
Read Full Article • 158 comments