Specifically, the performance specifications list the iPhone 7 with 2GB of RAM and a 1,960 mAh battery, an improvement over the 1,715 mAh battery in the iPhone 6s. The rumors of an improvement in battery life emerged over the summer from OnLeaks' Steve Hemmerstoffer (who's known to share details and part leaks on devices before they launch), as well as an alleged iPhone 7 battery image leak that marked the new iPhone as having a capacity of 7.04 watt-hours, larger than the 6.61 watt-hour battery in the iPhone 6s. 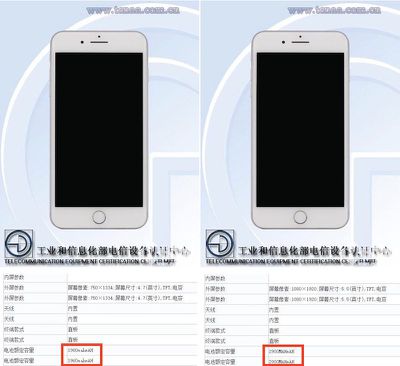 The iPhone 7 (left) and iPhone 7 Plus (right)
The iPhone 7 Plus appears to be facing a similar uptick in battery, with the filing depicting the 5.5-inch iPhone as having 3GB of RAM and a 2,900 mAh battery, another slight but noticeable improvement over the 2,750 mAh battery in the iPhone 6s Plus. What might be more interesting to some is the inclusion of 3GB of RAM, which has been rumored as a potential upgrade in the larger-screen iPhone 7 Plus because of the increased resource demands of the dual-camera system. A seemingly legitimate Geekbench benchmark test gave more credence to the rumor last week.

As we near September 16 and the launch of the iPhone 7 and iPhone 7 Plus, more information and opinions regarding the new smartphones will continue to come to light. This morning, embargoes lifted on reviews for Apple's new smartphones, with the consensus stating the models are "terrific," foundational blocks for future iterations, but if you skip this generation you won't be missing out on much.

djcerla
More battery thanks to the removal of the headphone jack.

As someone who switched to wireless headsets long ago and not looking back, I find this a fantastic tradeoff.
Score: 14 Votes (Like | Disagree)

More battery thanks to the removal of the headphone jack.

As someone who switched to wireless headsets long ago and not looking back, I find this a fantastic tradeoff.

I agree! And for the first time since the iPhone 6 they increased the battery size! I think that's a great treadoff
Score: 6 Votes (Like | Disagree)

With all your music production, I had you down as a wired user! May I ask what wireless headphones you'd recommend? I just use the Sony MDR-7506, which granted are far from the absolute best, but is the finest quality for that price point IMHO.

In studio, I use the Beyerdynamic 880 D PRO; they are good as they don't color the sound much. But I use them only for reference and spotting mistakes in the stereo field, as I don't like to mix into headphones.

All wired! Those are mission-critical applications, though, you don't want your batteries to drain in the middle of a DJ set or recording session.

And that's why it feels so liberating to drop my iPhone at the gym's desk, power on my Powerbeats2 and workout wirelessly to some Metal! They were bought for workouts, but I enjoy them so much that I've started using them somewhere else, i.e. at the beach, whereas I loathed doing that with wired headphones.
Score: 5 Votes (Like | Disagree)

keysofanxiety
I'm indifferent about the aesthetics for the iPhone 7, but boy is that hardware ballistically powerful.

Flagship Android manufacturers will really start to panic now. They'll probably throw in a few more CPU cores and double the RAM to try and keep up.
Score: 4 Votes (Like | Disagree)

x-evil-x
You people with iPhone 6S's don't need to be upgraded every year anyway. relax and breath you can last 2 years now on phones. We reached that limit where there isn't much of a change performance wise at least.
Score: 4 Votes (Like | Disagree)
Read All Comments