Last week, MacRumors covered photos of what appear to be the front and rear of bare iPhone 7 logic boards, and since that time we've been able to study these boards and compare them to previous iPhone generations' bare and populated logic boards.

Comparing the boards with existing component offerings and information suggests that Apple has indeed moved on from Qualcomm as its baseband modem supplier and switched to Intel for the upcoming iPhone generation. This does not preclude Apple from having other versions of the iPhone 7 or 7 Plus logic boards which feature a Qualcomm modem, such as an international model with differing LTE band options, as has been rumored.

Leaked iPhone 7 logic board with Intel modem location annotated
The image above shows the previously leaked and annotated logic board front with the probable location of the Intel baseband modem annotated. The pad pattern for the part in this location is markedly different than the pad pattern for the Qualcomm MDM9635, as shown in iFixit's parts catalog. The pad pattern of this mystery part also appears to match the dimensions listed on Intel's website for similar baseband modem offerings to the rumored XMM 7360 design solution.

Intel's SMARTi 5 RF transceiver, which accompanies the modem in Intel's reference solution, does not appear to be present on the iPhone 7 board, according to the package dimensions specific to the transceiver. It is always possible that the dimensions listed may be for a solution different than what Apple has used, whether it be custom or unannounced, but it appears as though Qualcomm could still be the supplier for the RF transceiver.

While there is not an exact pin match between the logic boards, the package size and overall number of pads on the reverse side is consistent with the WTR3925 and Qualcomm power management chips seen on the iPhone 6S and 6s Plus logic boards. The pad patterns also feature offset rows of pins, which have been historically exclusive to Qualcomm pad patterns on previous iPhones.

Comparison of bottom rear portion of iPhone 6s (left) and iPhone 7 (right) logic boards
Near the space where the transceiver likely sits on the bottom rear, we've seen quite a few changes, as the separation metallization between RF chain and audio/battery components has gone from horizontal to vertical. As a result, the area dedicated to audio amplifiers and battery charger has grown. With the rumored removal of a headphone jack, it would seem that Apple is prime to remove one amplifier, although that is not evident from the leaked photo. With the display connection inversion and potential introduction of a capacitive home button, there are good reasons this area could have seen some growth.

Comparison of A9 (left) and A10 (right) pad patterns
Finally, when looking at the A10, we notice a vacant row of pads near all four edges of the pad pattern. This is actually not new to the A10, as the A9 pad pattern also featured this. This is also somewhat common in large chips, such as desktop CPUs, where the inputs and outputs near the edge of the device have some separation from the device's core power and signals. What this resulted in for the A9 is package growth despite a small die shrink comparative to the A8.

Given that the A10 is likely to feature the same 16nm FinFET process as the A9, or some optimized variant thereof, it is very possible that we could see growth in die size without a huge jump in transistor count. As for TSMC's InFO packaging, it's still not clear whether this will drive package sizes at all for Apple's devices.

The A10's board footprint also features four rectangular boxes of missing pins. These may actually be spaces for small components directly under the package of the device. Generally, the performance of some chip components that are used for power filtering benefit most by being as physically close to the device pins as possible, and they are commonly placed directly on the backside of the PCB, connected by vertical metal interconnects through the board called vias, under chips with a large amount of digital switching functionality. For most mobile devices, that space is not available, but that could be one explanation for these sections of missing pins.

With a few weeks to go until the official iPhone 7 unveiling, it's possible we could still see leaks of the logic board populated with chips and other components, which would give us more information about component changes coming in the new device. Full details are unlikely to arrive, however, until teardown experts get their hands on the new iPhone and are able to dig into the components and even put them under a microscope. 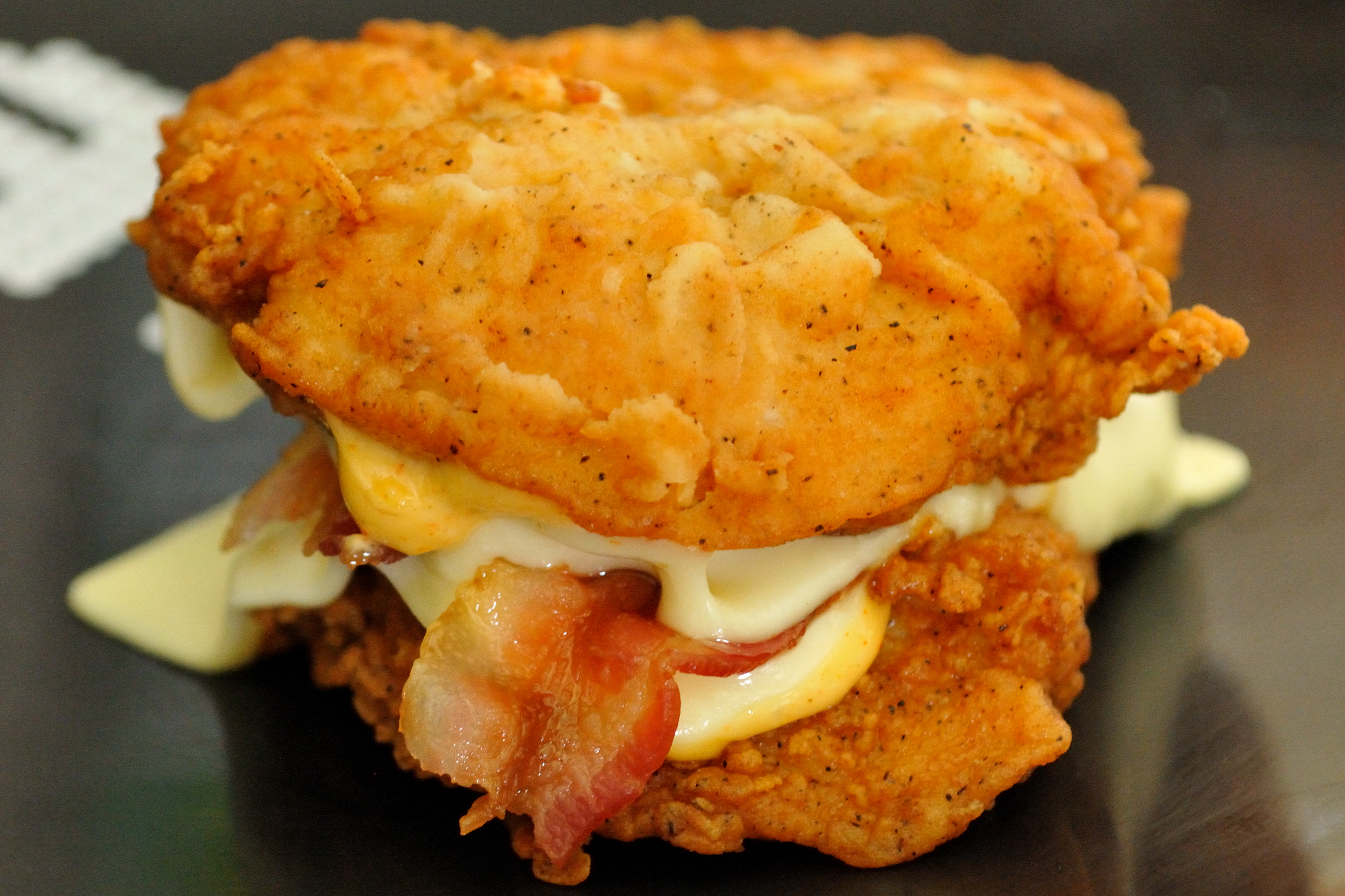 The proof that heart attack and happiness are not mutually exclusive.
Score: 10 Votes (Like | Disagree)

Sefstah
THIS IS GONNA BE THE BEST IPHONE EVER! Minus the heaphone jack, no new screen, no expandable memory, huge ugly camera bump, and still no true way to save and organize our files.
Score: 9 Votes (Like | Disagree)

nagromme
In my day, motherboards couldn't be accidentally swallowed.
Score: 8 Votes (Like | Disagree)

Not sure what this has to do with the article, but this is seriously making me hungry.

LOL. That is a "sandwich" that KFC used to sell a few years ago called the Double Down. It used chicken for the "buns" and had bacon and cheese in the middle.

It's a joke because a few years ago Tim Cook said Apple was "doubling down" on leaks regarding the secrecy of their unreleased products.
Score: 6 Votes (Like | Disagree)
Read All Comments

Wednesday February 24, 2021 7:26 am PST by Hartley Charlton
Hit-and-miss leaker Jon Prosser has today alleged that the upcoming 2021 iMac models will offer five color options, mirroring the colors of the fourth-generation iPad Air, and revealed a number of additional details about the Mac Pro with Apple Silicon. In a new video on YouTube channel FrontPageTech, Prosser explained that the redesigned iMacs will come featuring options for Silver, Space ...
Read Full Article • 286 comments

Monday February 22, 2021 8:52 pm PST by Joe Rossignol
Apple plans to release two new MacBook Pro models equipped with an HDMI port and SD card reader in the second half of 2021, according to analyst Ming-Chi Kuo, who outlined his expectations in a research note obtained by MacRumors. The return of an SD card reader was first reported by Bloomberg's Mark Gurman last month. "We predict that Apple's two new MacBook Pro models in 2H21 will have...
Read Full Article • 473 comments

Tuesday February 23, 2021 7:07 am PST by Hartley Charlton
Over the past week, some M1 Mac users have been reporting alarming SSD health readings, suggesting that these devices are writing extraordinary amounts of data to their drives (via iMore). Across Twitter and the MacRumors forums, users are reporting that M1 Macs are experiencing extremely high drive writes over a short space of time. In what appear to be the most severe cases, M1 Macs are sai...
Read Full Article • 623 comments

Thursday February 25, 2021 7:48 am PST by Joe Rossignol
Apple plans to unveil new 14-inch and 16-inch MacBook Pro models with Mini-LED-backlit displays in the second half of this year, according to industry sources cited by Taiwanese supply chain publication DigiTimes. The report claims that Radiant Opto-Electronics will be the exclusive supplier of the Mini-LED backlight units, while Quanta Computer is said to be tasked with final assembly of the...
Read Full Article • 147 comments

Thursday February 25, 2021 1:50 am PST by Sami Fathi
Valve, the makers behind popular game distribution platform Steam, will be forced to hand over aggregate historical sales, price, and other information on 436 games hosted on the store to Apple, as part of the Apple vs. Epic Games antitrust case. As reported in a paywalled report by Law360, during a virtual discovery hearing on Wednesday, U.S. Magistrate Judge Thomas S. Hixson ordered that...
Read Full Article • 107 comments