Apple is about to unveil the most significant overhaul of its MacBook Pro lineup in over four years, according to people familiar with the matter (via Bloomberg). 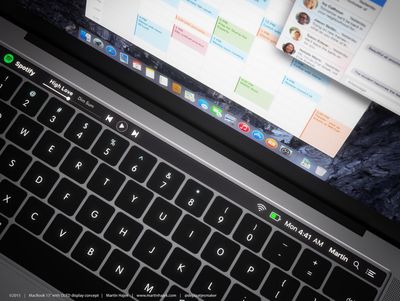 Consistent with previous rumors, the article says the updated notebooks are thinner and will include a touchscreen strip along the top of the keyboard, which is expected to present functions on an as-needed basis that fit the current task or application, as well as integrate Touch ID to enable users to quickly log in using their fingerprint.

The new top-of-the-line MacBook Pros will be slightly thinner than the current models but are not tapered like the MacBook Air and latest 12-inch MacBook, one of the people said. The new MacBook Pros have a smaller footprint than current models and the casing has shallower curves around the edges. The pressure-sensitive trackpad is also slightly wider, the person added.

An option for a version featuring a higher-performance graphics chip from Advanced Micro Devices Inc. will be available, another person familiar with the matter said. It’s unclear which provider Apple will use for the main processor, but Intel Corp. has supplied this in the past.

Apple is using one of AMD's "Polaris" graphics chips because the design offers the power efficiency and thinness necessary to fit inside the slimmer Apple notebook, the person said. The new graphics card is more than 20 percent thinner than its predecessor, AMD said earlier this year. AMD declined to comment, referring inquiries to Apple.

As reported previously, the switch to the new Polaris 11 architecture is expected to be a significant performance upgrade over the previous 28nm chips, with AMD promising "console-class GPU performance for thin and light notebooks" and "extraordinary VR experiences" from the new low-power mobile architecture.

The new design will also include USB-C connectivity that can handle charging, data transfers, and display outputs, according to the source, corroborating earlier rumors. Apple is also reportedly considering whether to offer the notebooks in gray, gold, and silver, although it's unclear if colored MacBook Pros will be available on initial release.

The new computers have been in advanced testing since earlier this year, according to the source, although they aren't likely to debut at an event "currently scheduled for September 7 to introduce next-generation versions of the iPhone".

With Monday, September 5 being Labor Day, previous predictions tagged September 6 as the day of Apple's iPhone 7 event, but Wednesday still roughly lines up with Apple's usual pattern for iPhone releases. Last year, Apple announced the iPhone on September 9, started pre-orders on September 12 and released it on September 25. The company may opt to unveil refreshes for the Mac at a separate event later in the fall, perhaps in October.

SMIDG3T
Gonna be an expensive end to the year. iPhone 7, Apple Watch 2 and a new MacBook Pro.
Score: 54 Votes (Like | Disagree)

Appleaker
Why is this the title?! It's the only overhaul in 4 years!
Score: 51 Votes (Like | Disagree)

Make it touchscreen and I'll switch from windows 10

What's with all the boners for touchscreen. It's so stupid on a laptop, especially a Mac where the trackpad is so freakin good already. But if you like getting smudges on your screen, go right ahead.
Score: 37 Votes (Like | Disagree)

redheeler
The USB-C is what worries me about this otherwise great MacBook Pro update. If it only has USB-C, no less than five standards (MagSafe, USB-A, HDMI, Mini DisplayPort/Thunderbolt 2, SD card slot) are being dropped all at once. Many people (myself included) who use these Macs aren't ready for that yet.
Score: 33 Votes (Like | Disagree)

T'hain Esh Kelch
Well, the bar was really low the last 4 years, so that won't come as a surprise. Anything other than processor, GPU, RAM, disk size and battery upgrade, which, you know, has happened regularly the last 30 years, and the article will be correct.

Maybe we should all start writing for Bloomberg!
Score: 27 Votes (Like | Disagree)
Read All Comments

Monday June 27, 2022 1:57 pm PDT by Juli Clover
Benchmark testing has indicated that the 256GB variant of the 13-inch MacBook Pro with M2 chip offers slower SSD performance than its M1 equivalent, and now real-world stress testing by YouTuber Max Yuryev of Max Tech suggests that the 256GB SSD in the 13-inch MacBook Pro is also underperforming in day-to day-usage. The M2 MacBook Pro with 256GB SSD and 8GB RAM was slower than the M1 MacBook ...
Read Full Article • 312 comments