One of the clearest shots of Apple's upcoming iPhone 7 case has been posted over on French site Nowhereelse.fr this morning.

While the photo doesn't tell us anything we don't already know, it does confirm some details of the design we've come to expect from previous leaks. 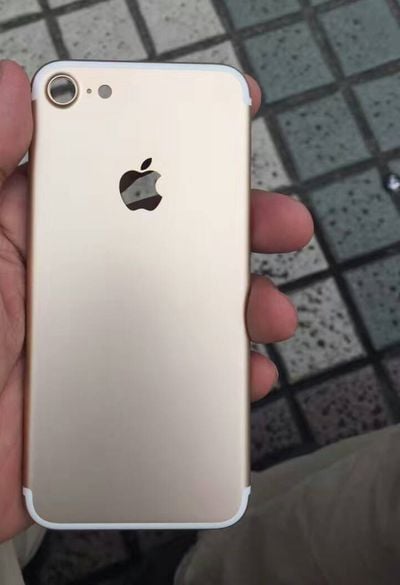 The appearance of the rear of the phone is consistent with 3D renders previously posted by NWE blogger Steve Hemmerstoffer depicting an iPhone 6s-like design, repositioned antenna bands, and a larger camera cut-out.

What's not clear in the photo is the connector situation at the bottom of the device. Apple is widely expected to do away with the headphone jack, possibly making way for a second speaker grille for stereo sound. The Lightning connector will then become an all-in-one port for audio output, charging, and accessory connectivity.

The photo offers no hint about Apple's plans to use a flush, touch-sensitive home button, a feature that could be reserved for the tenth-anniversary iPhone with an OLED display and glass casing expected in 2017.

According to a new report released yesterday by Piper Jaffray analyst Gene Munster, based on a survey of 400 iPhone owners, 15% of users expect to upgrade their devices in the fall, while 29% said they will consider it.

According to the research, 67% of iPhone owners in the U.S. have an iPhone 6/6 Plus or older, placing them in the typical carrier upgrade window during the iPhone 7 cycle. Meanwhile, 32% of users are said to own an iPhone 5s or older, meaning incompatibility issues with newer software could also edge said owners into an upgrade.

Apple is widely expected to announce the iPhone 7 and iPhone 7 Plus in September. In addition to the aforementioned features, the smartphones are expected to be slightly thinner with faster Apple A10 processors, 32GB of base storage, improved waterproofing, and faster LTE and Wi-Fi. 3GB of RAM and a dual-lens rear camera are said to be exclusive to the 5.5-inch model.

BornAgainMac
This year Apple should pretend the iPhone is another Mac Pro product and just skip the update.
Score: 56 Votes (Like | Disagree)

KJL3000
That protruding camera is getting even worse by getting bigger and lacking the silver bezel...
Score: 24 Votes (Like | Disagree)

I really hope Apple surprises us all with an all new design. I don't want to have to explain to my non-tech savvy friends and family that I have the new iPhone and not an iPhone 6/6S.

I don't get why people care about this. Either the new phone has something that makes you want to upgrade or it doesn't. And if it does who cares if it looks similar to last years phone? To me people wanting everyone to know they have latest and greatest is just plain vanity.

For me if the only thing about this phone is a better camera and no headphone jack I'll keep my 6S another year.

The first year in a long while I'll be passing on getting a new iPhone. I'll stick with my 6S Plus for another year.

Do most people get a new phone every year? I'm going to assume you were in the minority.
Score: 22 Votes (Like | Disagree)

rodpascoe
Why would you take a photo of the back and then not take one of the front too?

I never understand these 'leaked' photos, you do have to wonder if they are Apple deliberately drip feeding info so that case manufacturers etc can have something to work with.
Score: 19 Votes (Like | Disagree)
Read All Comments