Apple executive Bozoma Saint John, who serves as the Head of Global Consumer Marketing for Apple Music and iTunes, is auctioning the opportunity to sit down with her for a one-hour "power lunch" in Los Angeles, California within the next year. 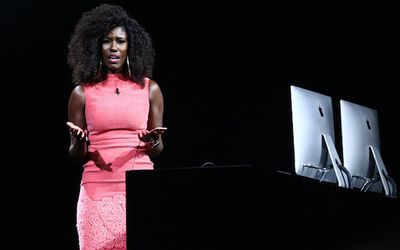 Bidding starts at $1,500 on Charitybuzz, the same platform where lunches with Apple CEO Tim Cook have raised nearly $1.7 million combined over the past four consecutive years in support of the RFK Center for Justice and Human Rights.

Saint John, known as "Boz," came into the public spotlight when she enthusiastically demoed new Apple Music features at WWDC 2016. Her fun on-stage appearance starts just after the 1 hour and 11 minute mark of the keynote video below.

For iTunes, Boz oversees initiatives for all verticals including film, TV, movies, books and various other forms of entertainment content. Additionally, Boz’s years of expertise authentically joining the world’s best artists with the world’s biggest brands makes her uniquely qualified to help bring Apple Music to consumers globally in a meaningful, impactful and memorable way. […]

Most recently Saint John stole the show at the keynote to Apple’s 2016 World Wide Developers Conference. Buzzfeed's headline even claimed that she is the coolest person to ever go onstage at an Apple event. But as Wired said, she was a bad ass long before she was at Apple.

The charity auction has an estimated value of $10,000, with bids accepted until Thursday, July 21 at 12:12 p.m. Pacific Time. The funds raised will be donated to the Rush Philanthropic Arts Foundation, dedicated to providing inner city youth across New York City with significant exposure to the arts.

Mr-Stabby
Stole the show? I seem to remember she was rather cringeworthy.
Score: 53 Votes (Like | Disagree)

Klae17
How much to never have to see developers and on stage presenters awkwardly rap again?
Score: 33 Votes (Like | Disagree)

Stole the show? I seem to remember she was rather cringeworthy.

You remember correctly. She was very cringeworthy.
Score: 27 Votes (Like | Disagree)

cwagdev
These things would be a lot more interesting if done as a raffle. The opportunity is way out of reach for the normal person. I also think a $50 raffle to have Lunch with Tim Cook would raise more than the last two lunches combined.
Score: 21 Votes (Like | Disagree)

PowerBook-G5
Is she going to force the person who pays for this to sing along to some hip hop song?

I was not a fan of her portion of the Keynote, nor am I fond of the product which she introduced. She seemed/seems [S]very[/S] incredibly self centered. Take a look at her twitter account. ('https://twitter.com/SaintBoz?ref_src=twsrc%5Egoogle%7Ctwcamp%5Eserp%7Ctwgr%5Eauthor')
Score: 20 Votes (Like | Disagree)

Stole the show? I seem to remember she was rather cringeworthy.

I respectfully disagree :) I think she was fun. It's only awkward if you make it awkward :cool:
Score: 20 Votes (Like | Disagree)
Read All Comments