When Apple announced a refreshed 12-inch Retina MacBook last week, it provided several publications with review units to get a look at the changes in the new machine. We've gathered up a range of these reviews below to highlight the general release reaction to the new 2016 MacBook.

The MacBook is identical in design to the 2015 MacBook, but it includes a faster SSD, improved Skylake processor with better graphics, longer battery life, and a new Rose Gold color option. Many of the reviews focus on these improvements while also calling out missing features that many were hoping for, including an increased number of USB-C ports, Thunderbolt 3, and an improved FaceTime camera. 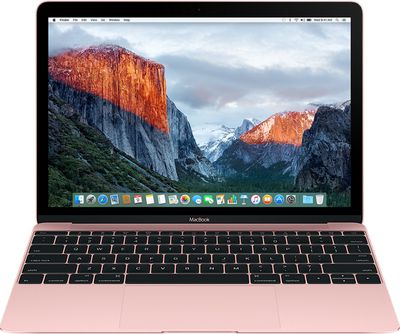 Engadget's Dana Wollman says Apple's claim of 25 percent better graphics performance and extra battery life "are indeed accurate." With the SSD in the 1.2GHz 512GB machine, Wollman saw read/write speeds of 947MB/s and 845MB/s, respectively, significantly improved over the 738.2 and 451.7MB/s speeds of the year-ago model.

In everyday use, I had no problem juggling all my usual apps: Slack, Spotify, TextEdit, Photos, Notes, Messages, Maps and Chrome, with nine pinned tabs and a handful of unpinned ones. Apps were quick to launch, and I thankfully didn't notice any of the hiccups that sometimes plague slower machines; it kept up as I hopped between pinned browser tabs, for instance, which not all laptops do. [...]

How similar is the updated MacBook to last year's model? Put it this way: I was strongly tempted to assign it the exact same score. In the end, I decided it deserved a slightly higher number as a way of acknowledging the extra hour of battery life and considerably faster disk speeds.

Ars Technica's Andrew Cunningham said the 2016 update isn't going to please people who disliked the 2015 MacBook given its single USB-C port. Those who held off from purchasing the 2015 MacBook might be interested in the 2016 model given its speed improvements, though, and with the SSD, encrypted performance is much improved. Ars Technica has a wide range of benchmarks that are worth checking out.

If you've already got a 2015 MacBook, this one is usually faster but won't run circles around it. Its CPU, GPU, and storage performance is in the neighborhood of a MacBook Air from two or three years ago. This new release is a solid upgrade for anyone with a Mac from, say, 2010 or earlier, but it's not a high-powered workstation.

If you thought you wanted a MacBook but didn't buy one because you were worried about the speed, the new model's GPU and storage in particular are improved enough that they might tip the scales.

Laptop Mag's Mark Spoonauer says the 2016 12-inch MacBook "better than its predecessor" but "still involves compromises." He highlights the improvements in the 2016 MacBook but notes that Apple didn't fix its biggest shortcomings - port availability and low-res FaceTime camera.

The 2016 MacBook is certainly an improvement over its predecessor. It's significantly faster, especially if you opt for the Core m5 model, and it lasts an hour longer on a charge, all while being extremely portable. I also continue to love the Retina display and don't really mind the flat butterfly keyboard. However, for this kind of money, I would really like to plug in a power cable and a second device sans a dongle, and I believe anything in this price range should be able to power two external monitors.

The Verge's Dieter Bohn said the new MacBook feels about 25 percent faster. He also covers the new "vibrant" Rose Gold color, which can look "either kind of bronze or incredibly pink."

Geekbench 3 pegs the speed improvements on raw processor operations at around 20 percent, but disk-write speeds using Blackmagic saw bigger improvements, as much as 80 or 90 percent faster (reading speeds look like smaller, incremental improvements). Overall, the thing feels about 25 percent faster to me. [...]

My hunch is that if you were worried that the last MacBook was too underpowered for you, the new MacBook will only assuage your concerns by, well, 25 percent or so.

Apple is selling the new Retina MacBook on its website, with prices that start at $1,299. Orders placed today will be delivered in approximately a week, but many retail stores around the world have the machines in stock for immediate purchase.

Blizzardman
Why are people constantly complaining about this laptop as if Apple got rid of the Air and Pro and this was the only option? Get the other machines if you need ports or performance and quit whining.
Score: 25 Votes (Like | Disagree)

crsh1976
I just can't wait for the "omg the iPad's A9 is so fast, Apple is ready to drop Intel and move its Macs to ARM!!" comments.

aaronhead14
Still can't figure out why anyone would by this crap. If you're spending this much on a laptop, get a MacBook Pro. One port is unacceptable!
Score: 21 Votes (Like | Disagree)

One port is not a problem. If its for you, then the product is not for you. But the 480p camera, o_O ... I would like to know the reason why ... must be something

I've been saying it for a while now, Apple is the new General Motors. They could fix EVERYTHING that people gripe about in their machines (including the MacBook) TODAY if they wanted to...

... But they're out of ideas. So they'll spit it out piece by piece, year after year to keep you buying.

This isn't a company that loves its customers, it's a company that has its balls out and middle fingers up to them, practically daring them to buy their half-baked products.
Score: 17 Votes (Like | Disagree)

Crosscreek
I get the minimalist thing but 2 ports is required IMHO.
Score: 15 Votes (Like | Disagree)

Why are people constantly complaining about this laptop as if Apple got rid of the Air and Pro and this was the only option? Get the other machines if you need ports or performance and quit whining.

The bulk of the gripe comes because most users were looking for an enhancement to the existing Air lineup, not another product that cuts corners.

I would argue most people who want "thin and light" laptops are probably more than satisfied with the MBA's size and weight. In fact, as I've stated countless times, the difference in size between the 11" MBA and the 12" rMB is almost non existent. we're talking about a couple MM's here and there, and the weight of a roll of quarters difference. What we were looking forward to was an upgrade to the MBA to fix the one thing that is horrible about it. The display, which hasn't been updated in 5 years and is arguably one of the worst displays avialable on a $1000+ level laptop.

But instead of giving us the MBA's with retina option. The MBA's went untouched and a new, very compromised, and much MUCH more expensive laptop fills that spot. a Laptop that sacrifices everything the MBA had going for it, in favour of "thin".

So now from Apple laptops we have a weird choice.
Thin and Light with good display? You go rMB, but you get 1 port, a heavily throttled CPU, compromised typing experience, 480p webcam and a $1549 price tag (CAD)
Thin and light with semi powerful internals? You go MacBook Air. You get back two USB-A ports, magsafe and thunderbolt (with 13" also getting SD card). But you're stuck with a really low end TN display, with horrible colours and a lot of light bleed and wash out.
POwerful internals with all the things: Get a rMBP. you sacrifice the "thin and light" that the two others offer, But you get all the ports and more, the best power Apple can offre in a laptop and the high res display. But confusing matters against the lower two options, the 13" rMBP comes in at the same price at the rMB.

The rMB just did nothing but add confusion to the product lineup, that was historically, very straight forward. But now, we have this product sitting dab smack in the middle, that nobody was really looking for.

Thats why there's so many people going "WTF apple?"
Score: 14 Votes (Like | Disagree)
Read All Comments

Sunday July 3, 2022 8:07 pm PDT by Sami Fathi
While past rumors have indicated the upcoming second-generation AirPods Pro will feature a built-in heart rate and body temperature sensor, Bloomberg's Mark Gurman has cast doubt on those rumors turning out to be true, saying instead such a feature is unlikely to come anytime soon. "Over the past few months, there have been rumors about this year's model gaining the ability to determine a...
Read Full Article • 73 comments

Monday July 4, 2022 5:50 am PDT by Hartley Charlton
Apple is working on an Apple Watch Series 8 model with a larger display, according to DSCC's Ross Young and Haitong International Securities's Jeff Pu. In October last year, Young suggested that the Apple Watch Series 8 could come in three display sizes. Now, responding to a query about the rumor on Twitter, Young claims that the additional display size joining the Apple Watch lineup will be ...
Read Full Article • 196 comments