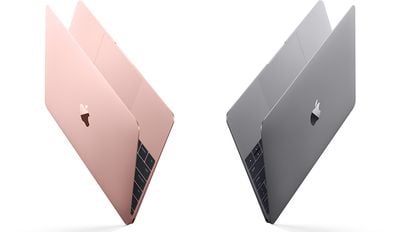 The ultra-thin notebook has the same all-metal unibody enclosure that remains 13.1 mm thick and weighs just 2 pounds, with a full-sized butterfly mechanism keyboard and Force Touch trackpad. Like the original model, the new 12-inch MacBook is also fanless and has no moving parts or vents.

The one-hour improvement to battery life, which is now up to 10 hours, was achieved not only by more efficient Skylake processors, but also due to a larger 41.4-watt-hour lithium-polymer battery. The original 12-inch MacBook has a slightly smaller 39.7-watt-hour battery that lasts up to 9 hours per charge.

Apple has also made 8GB of memory standard across all 13-inch MacBook Air configurations.

justperry
Barely 1 minute in and already >10 complainers.
If you complain it is NOT for you.
Score: 81 Votes (Like | Disagree)

Brad9893
Cue the wailing and gnashing of the teeth from people expecting TB3 and a 2nd USB-C port...
Score: 57 Votes (Like | Disagree)

Ursadorable
Good.. how about updating the Mac Mini and Mac Pro now?
Score: 48 Votes (Like | Disagree)

Barely 1 minute in and already >10 complainers.
If you complain it is NOT for you.

I actually come here to read the complaints. I wish Apple would. Maybe that would inspire a bit more innovation. This update is a big let down.
Score: 40 Votes (Like | Disagree)
Read All Comments