Apple CEO Tim Cook was once again named one of "the 100 most influential people" by TIME magazine in its annual list recognizing individuals who have made a major impact on the world. Tim Cook is recognized as a "Titan" alongside people like Yuri Milner, Binny and Sachin Bansal, Dwayne "The Rock" Johnson, Wang Jianlin, and Pope Francis.

Each person included on TIME's list is featured alongside an essay written by an associate, with Cook's 2016 note penned by Disney CEO Bob Iger. 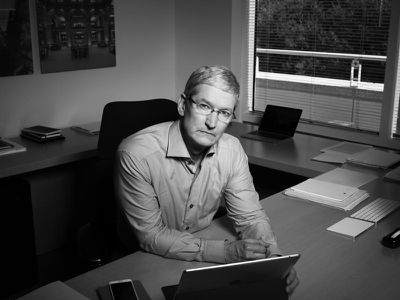 Apple is known for elegant, innovative products that change the world by transforming how we connect, create and communicate, as well as how we work, think and act. Its continued success requires a leader of great courage and character who demands excellence, upholds the highest ethical standards and routinely challenges the status quo, including encouraging vital conversations about who we are as a culture and a community.

Tim Cook is that kind of leader.

Behind his soft-spoken demeanor and Southern manners is a focused fearlessness that comes from deep personal conviction. Tim is committed to doing the right thing, in the right way, at the right time and for the right reasons. As CEO, he's led Apple to new heights, and he continues to build a global brand that is universally recognized as an industry leader and widely respected for its values.

Tim Cook has been included on the list of most influential people several times, and in 2014, Cook was nominated for the TIME person of the year after making the bold move of publicly announcing his sexual orientation despite being a notoriously private person.

jayducharme
It increasingly looks like Cook's biggest contributions to Apple with be in the area of ethics and environment, and that's not a bad thing. His stand against the FBI was the icebreaker that encouraged other tech industries to follow his lead.
Score: 17 Votes (Like | Disagree)

SSD-GUY
Tim 'bout to drop the hottest album of the year.

Learning to pose from Dre it seems.
Score: 10 Votes (Like | Disagree)

Cook is a good guy. I never understand the hate. He's not Jobs, so get over it.

Cook is a good guy. I never understand the hate. He's not Jobs, so get over it.

I don't understand it either. Just have to chalk it up to the sad who are intrinsically unhappy, do not have fulfilling lives, and where hating and putting down others is needed for them to feel good about themselves.
Score: 7 Votes (Like | Disagree)

Blackstick
Dynamically different leader than Steve was, and probably what the company needed. Tim will go down in the Fruit Co. history book as the CEO who made the company a little bit friendlier to those on the outside, and a company with a culture of advocacy for what's right, which I prefer over the secret-lab/startup mentality previously instilled.
Score: 7 Votes (Like | Disagree)
Read All Comments