Tim Cook Nominated for TIME's 2014 Person of the Year

TIME today posted its shortlist of people who are being considered for the publication's annual "Person of the Year" award, and Tim Cook is once again on the nomination list. TIME is recognizing Cook for the launch of the iPhone 6 and 6 Plus and his recent decision to come out as gay.

Back in late October, Tim Cook made the bold move of announcing his sexual orientation in a letter written for Bloomberg Businessweek, where he said that his decision was done to "bring comfort to anyone who feels alone" and to "inspire people to insist on their equality." 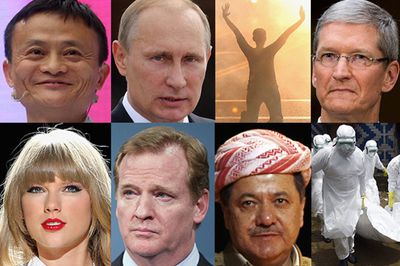 2014 Person of the Year nominees, via TIME

Tim Cook, who introduced Apple's iPhone 6 and 6 Plus, Apple Watch, and Apple Pay this year, and whose decision to come out made him the first openly gay Fortune 500 CEO.

TIME's Person of the Year award is given to "a person, couple, group, idea, place, or machine" that has "for better or for worse done the most to influence the events of the year," with the publication's editorial team ultimately deciding on a winner.

Tim Cook was previously nominated in 2012 alongside Yahoo CEO Marissa Meyer, Bill and Hilary Clinton, and the three scientists who discovered the Higgs Boson, but the award went to U.S. president Barack Obama. In 2013, the Person of the Year award went to Pope Francis, and in 2010, it went to Facebook CEO Mark Zuckerberg, the only tech company CEO to receive the award since Amazon CEO Jeff Bezos won in 1999.

Update December 10: TIME has named the "Ebola Fighters" as its Person of the Year for 2014.

pk7
Putin, Person of the Year?

so a bunch of editors sit around a table and come out with a list, big whoopie-doo.
Score: 25 Votes (Like | Disagree)

so a bunch of editors sit around a table and come out with a list, big whoopie-doo.


Being gay in a world where gays and lesbians are still persecuted or killed for who and what they are is sure as hell a big deal. And for someone who the head of one of the biggest companies in the world to come out as gay is a big deal. That gives others hope that it can and will get better.

Rogifan
I'm sorry but in no way, shape or form was Tim Cook the most relevant/important/noteworthy person of 2014. These lists are a joke.
Score: 17 Votes (Like | Disagree)

Taylor Swift person of the year ?

Putin? how about Swift? At least Putin could be voted person of the year via "the worst" Swift - be cause she's pretty??? LAme!

Putin, Person of the Year?


This is not about the best/nicest/coolest person of the year. It's for the most influential. Has nothing to do with good vs evil.
Score: 17 Votes (Like | Disagree)
Read All Comments