Last night, the company hung up a pirate flag at its One Infinite Loop campus to pay homage to the Jobs-led team that worked on the original Macintosh, which was viewed as rebellious at a time when Apple was focusing on the Lisa. 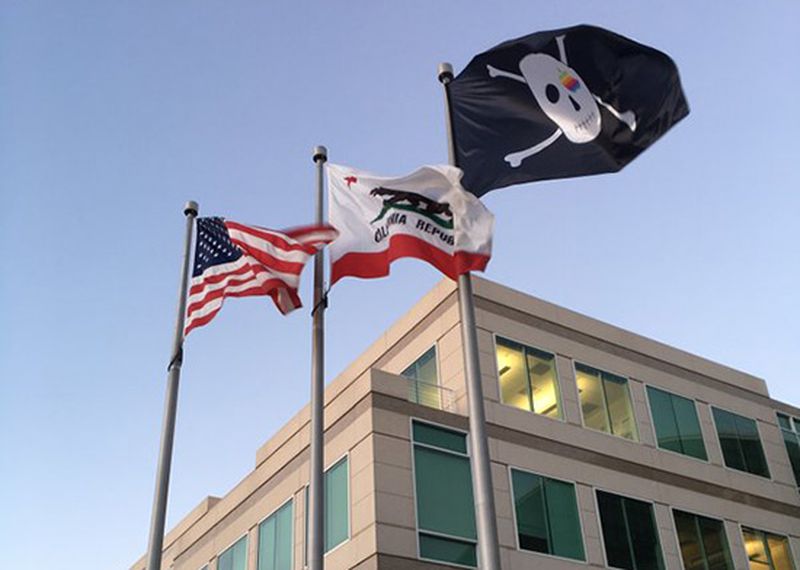 From near-bankruptcy to becoming the world's most valuable public company, Apple has been through a series of highs and lows over the past four decades.


Apple's history is vast, but the timeline below provides a basic overview of some of the company's important moments over the years.


1976 - Apple's history begins in the garage of Steve Jobs' childhood home in Los Altos, California, where Steve Wozniak and Jobs tested -- but designed elsewhere -- the first Apple I computers, which they later introduced at the Homebrew Computer Club. The Byte Shop places 50 orders. The computer later sells for $666.66. 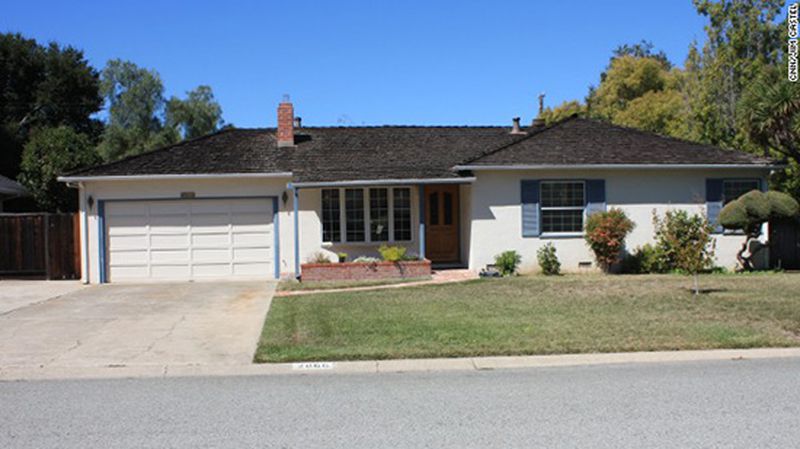 1976 - Ronald Wayne designs the first Apple company logo, and prepares the trio's first partnership agreement, but relinquishes his 10% stake in the Apple Computer Company for $800 just twelve days later to avoid the potential financial risk. Wayne has assets that creditors could seize if the partnership becomes indebted.

1979 - Jef Raskin, a human interface expert who joined Apple a year prior, receives approval to begin work on the Macintosh project. Raskin names the computer after the McIntosh apple, his favorite fruit. The Lisa Project, another personal computer, also begins under Ken Rothmuller, with a projected shipping date of 1981. 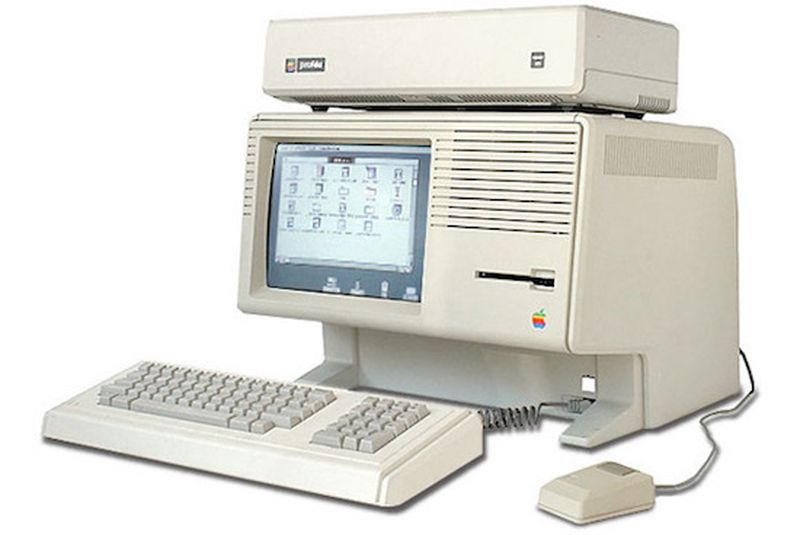 1980 - Apple launches its IPO and becomes a publicly traded company on December 12, 1980, selling 4.2 million shares for $22 each. The company generates more capital, and instant millionaires, than any IPO since Ford Motor Company in 1956. Apple continues to trade on the NASDAQ under the stock ticker AAPL today.

1982 - Steve Jobs is forced out of the Lisa project and takes over control of the Macintosh project from Jef Raskin, who subsequently resigns.

1983 - Apple launches the Lisa on January 19, 1983, but sells only 100,000 units due to the personal computer's expensive $9,995 price tag, compatibility issues, and perceived slow performance among consumers due to the Motorola 68000 processor's difficulty in running the complex Lisa operating system.

1983 - Steve Jobs convinces John Sculley, then president of Pepsi-Cola, to join Apple as president and CEO on April 8, 1983. Sculley was convinced after Jobs asked him the following: "Do you want to sell sugared water for the rest of your life? Or do you want to come with me and change the world?"

1984 - Apple's iconic "1984" commercial airs during a break in the third quarter of Super Bowl XVIII on January 22, 1984. The one-minute spot, based on George Orwell's novel of the same name, introduces the original Macintosh. The ad's intended message is Macintosh combating the conformity of "Big Brother," sometimes interpreted as IBM.

“Hello, I’m Macintosh. It sure is great to get out of that bag. Unaccustomed as I am to public speaking, I’d like to share with you a maxim I thought of the first time I met an IBM mainframe: NEVER TRUST A COMPUTER YOU CAN'T LIFT! Obviously, I can talk, but right now I’d like to sit back and listen. So, it is with considerable pride that I introduce a man who’s been like a father to me… STEVE JOBS.”


1985 - Steve Jobs resigns from Apple on September 16, 1985 following an internal power struggle with Apple's Board of Directors and then-CEO John Sculley. Jobs founds NeXT Computer with other former Apple employees later in the year.

1987 - Microsoft releases the first version of Windows to much disappointment.

1991 - Apple releases the PowerBook series on October 21, 1991, a two-decades-earlier precursor to the MacBook Pro.

1993 - John Sculley steps down as Apple CEO in May 1993 and is replaced by Michael Spindler.

1993 - Apple releases the ill-fated Newton as an early entrant in the PDA market. 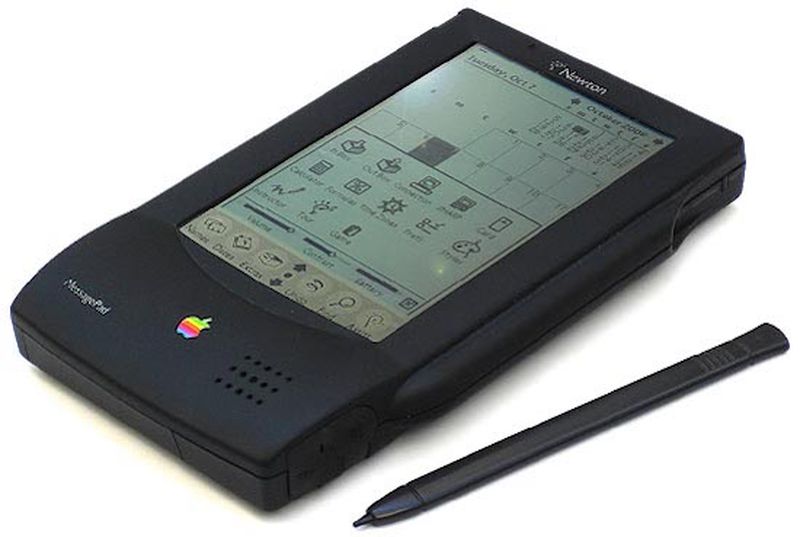 1997 - Apple, still under the leadership of Amelio, finalizes its acquisition of NeXT Computer on February 7, 1997, bringing Steve Jobs back to the company he co-founded as an advisor.

1997 - Apple is in financial trouble, with its stock reaching a 12-year low in the second quarter. Over the Independence Day weekend, and on the heels of the company losing over $700 million, Jobs convinces Apple's Board of Directors to oust Amelio as CEO. Amelio resigns less than one week later.

1997 - Steve Jobs is appointed as interim CEO and focuses on simplifying Apple's product lineup and giving importance to talents such as Jony Ive.

1997 - Apple launches the Apple Online Store on November 10, 1997 based on its new built-to-order product strategy. The website is built using NeXT's WebObjects web application technology acquired earlier in the year. 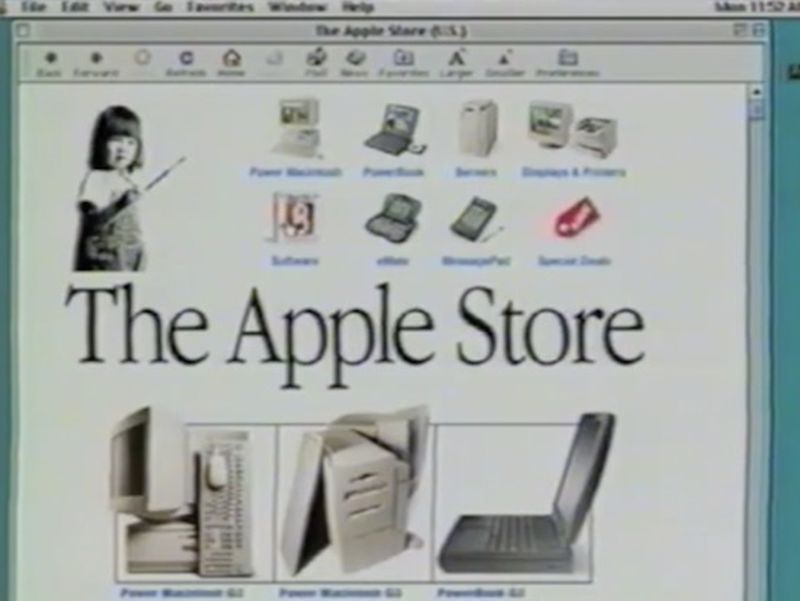 1998 - Apple announces the iMac on May 6, 1998 as the first consumer-facing product since Steve Jobs returned to the company as interim CEO. The colorful, translucent all-in-one desktop computer, designed by Jony Ive, plays a key role in Apple's rebound from its financial problems of years prior. 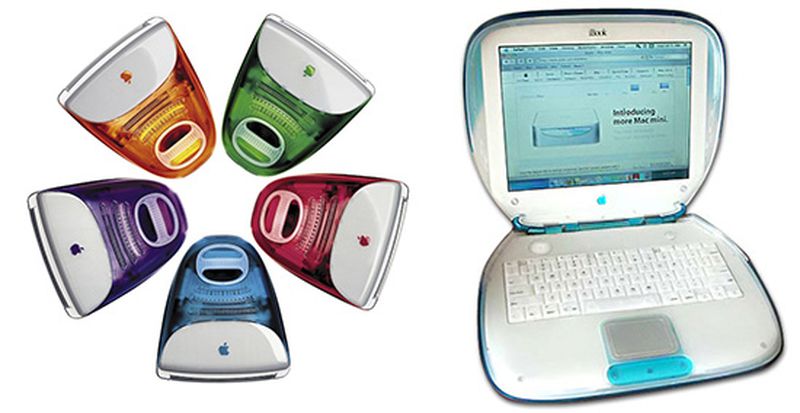 1999 - Apple releases the iBook on June 21, 1999 based on the colorful iMac design. The notebook lineup is positioned as a lower-end offering alongside the PowerBook series. The original iBook G3 features a clamshell design with translucent plastic, while the iBook G4 has an opaque white plastic case and keyboard.

2000 - Steve Jobs announces at Macworld that he has elected to be Apple's permanent CEO on January 5, 2000, dropping his "interim" designation.

2001 - Just months after the dot-com collapse, Apple's first two retail stores open in Tysons Corner, Virginia and Glendale, California on May 19, 2001. The two locations welcome over 7,700 people and sell a combined total of $599,000 of merchandise during their first two day weekend. Apple opens over two dozen more retail stores in the U.S. over the following year.

2001 - Steve Jobs announces the iPod on October 23, 2001 during a low-key event at Apple's Town Hall auditorium, describing the portable media player as a "quantum leap" that allows you to "fit your whole music library in your pocket." The iPod, like the iMac, plays a key role in Apple's turnaround during the 2000s.

2006 - Apple and TBWA\Media Arts Lab launch a memorable "Get a Mac" advertising campaign starring actors John Hodgman as PC and Justin Long as Mac. The series of ads, which each begin with "Hello, I'm a Mac" and "I'm a PC," highlight the perceived weaknesses of Windows PCs while promoting Mac as a cooler alternative.


2007 - Steve Jobs famously introduces the iPhone on January 9, 2007 as if it is three separate products: a widescreen iPod with touch controls, a revolutionary mobile phone, and a breakthrough Internet communicator. The crowd erupts in applause upon realizing each are simply features of the smartphone.

2007 - Apple Computer Inc. renames to Apple Inc. on January 9, 2007 to reflect its wider focus on consumer electronics. “The Mac, iPod, Apple TV, and iPhone. Only one of those is a computer. So we’re changing the name," says Steve Jobs. 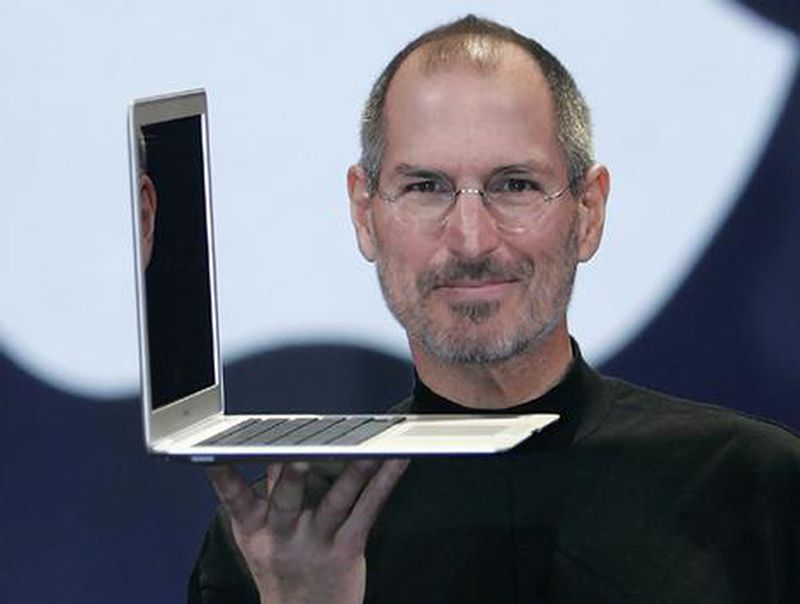 2011 - Steve Jobs passes away on October 5, 2011, one day after Apple introduced the iPhone 4S and Siri, following a lengthy battle with a rare form of pancreatic cancer and other health complications. Apple celebrates his life at its Cupertino campus two weeks later as the public greatly mourns his loss. 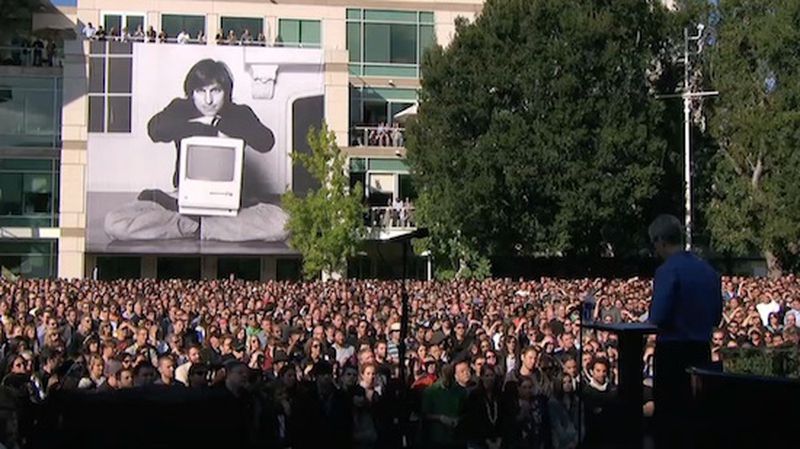 2012 - Apple Maps launches on iOS 6 to much criticism, leading to a public apology from Tim Cook and the resignation of iOS software chief Scott Forstall.

2014 - Tim Cook introduces the Apple Watch on September 9, 2014 as the company's first wearable device. The product is developed by a team led by Apple COO Jeff Williams, and the company collected over 18,000 hours of health and fitness data prior to its launch in April 2015. 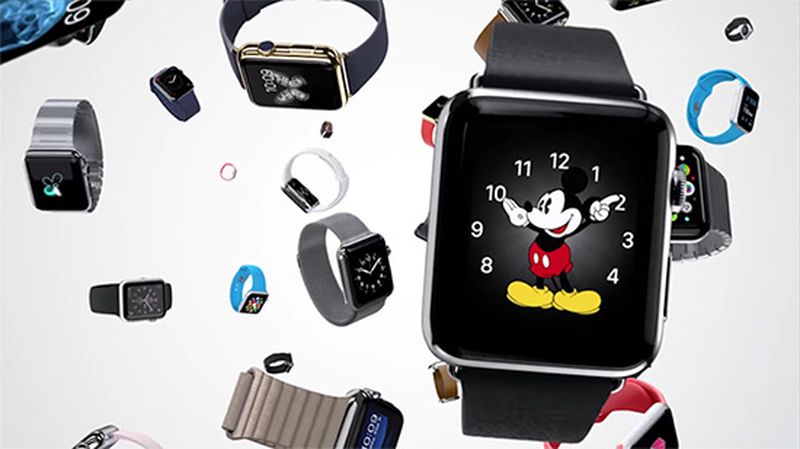 2016 - Apple releases the iPhone SE and smaller iPad Pro as it battles the FBI over smartphone encryption.

I never questioned your right to have whatever opinion have. So since you think Cook is wrong for the job who should Jobs have recommended replace him?


I think you're overthinking this. I don't have a particular individual in mind, but it wasn't my job to find a replacement either. Having said that, it appears to me that Steve Jobs was thinking of holding on to what he's built at the expense of another period of (risky?) visionary growth.

We can speculate as to whether there was some ego involved, perhaps he didn't want to be outshone by a successor. Perhaps (and more likely) he had a low estimation of any potential visionary leader's ability or capacity (in the mold of himself) to capture lightning in a bottle and didn't want that someone turning what he had built upside down chasing a new vision. But it would be just that, speculation. Look, Cook appears to be an honorable guy, and as I noticed in a prior comment, I think he's ethically principled.

I also feel the encroaching mediocrity within Apple. Products aren't nearly as focused, Software releases aren't quite so polished. iTunes is overdue for major overhaul. New Products are being (i feel) handicapped to generate more money at the expense of customer experience. The purchase of Beats Music was a very questionable move in my opinion. Perhaps it was inevitable.


Agree. While it would be hard to replicate that incredible period between 2001-2011 where Apple hit home run after home run, it feels a bit ruddlerless right now. It's either new sizes of already created products (iPad, iPhone) or watered down versions of previous products (iMac, Mini). Reception to the new products (Apple Watch and MacBook) has been lukewarm.

While they remain insanely profitable and have cash to burn, it doesn't feel like they have the focus and direction that they used to have.
Rating: 9 Votes

kevina2
Flying a pirate flag does absolutely nothing. Some of the most beautiful things in my place are Apple products. It's too bad they all work like **** these days.

Remember when things just worked? I do and I really miss those days... as my time machine back up stalls yet again...etc
Rating: 9 Votes

Agree. While it would be hard to replicate that incredible period between 2001-2011 where Apple hit home run after home run, it feels a bit ruddlerless right now. It's either new sizes of already created products (iPad, iPhone) or watered down versions of previous products (iMac, Mini). Reception to the new products (Apple Watch and MacBook) have had a lukewarm reception.

While they remain insanely profitable and have cash to burn, it doesn't feel like they have the focus and direction that they used to have.


It's Tim Cook that's the problem :). He needs to go, along with a few others.
Rating: 6 Votes

jonnyo
April 2, 1976: the first prediction made of Apple's demise, establishing an unofficial Silicon Valley ritual that's older than the majority of the people and the companies that continue to do it.
Rating: 6 Votes

According to Wozniak, the garage is only a myth. Thery never built anything in it. It was just a storage place.


Perhaps the garage was more like "That 70's Show" basement :)
Rating: 5 Votes

It's Tim Cook that's the problem :). He needs to go, along with a few others.


Tim Cook isn't a vision guy. Tim Cook is an accountant, and he's probably not a good fit for the job. I'm willing to stipulate he has impeccable moral clarity, but I don't think he's product oriented per se.
Rating: 5 Votes

meaning-matters
No matter how things are now, successful Apple was all about Steve Jobs.
Rating: 5 Votes