Wednesday October 19, 2011 12:25 pm PDT by Eric Slivka
Aerial footage (no audio) of Steve Jobs celebration (Source: CNET)
As we noted earlier today, Apple updated its Steve Jobs memorial site with remembrances of the company co-founder and CEO ahead of today's private celebration of Jobs' life held on Apple's campus in Cupertino, California. While the private event is closed to the media and the public, those in attendance have been sharing some details on the event and their thoughts, with many expressing the feeling that they are finally feeling a sense of closure with the event. 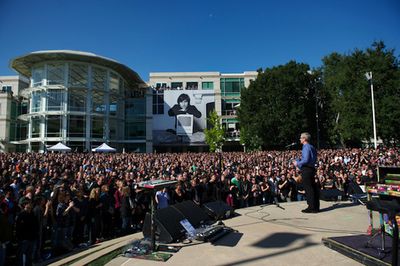 Tim Cook speaks at Apple's celebration of Steve Jobs' life (Source: Apple)
Twitter seems to be the medium of choice for attendees to share their experiences, and we've collected a few of the comments we've spotted there.

An incredible and fitting celebration. Tears, laughter and some closure. #stevejobs

That was a really moving ceremony. Norah Jones, Coldplay, Al Gore... Got choked up when they played Steve reading "Here's to the Crazy Ones"

....and most importantly probably goes against the wishes of the family.

But if there's something in this event that the family doesn't want to be seen, why would they be ok with 50,000 employees seeing it? It's not exactly private at that point.
Score: 12 Votes (Like | Disagree)

Kenndac
This thread is very highly strung. Demanding someone takes down a handy web app for archiving an Apple.com page? Bickering over people sharing bits about the event on Twitter?

I can't believe people are bickering over such stupid things in a thread about a memorial to Steve Jobs. Sheesh.
Score: 9 Votes (Like | Disagree)

you should read first before acting


Those are messages coming from millions of people and consequently NOT Apple's copyright. If such raw information were structured in any way, then Apple might have a copyright on the database...otherwise it belongs to whoever posted them.
Score: 9 Votes (Like | Disagree)

See, and that is where you don't get it. If it is indeed private then it is also part of people's private life. They can tweet about it. I don't mean make photos and post them nor record anything.

That is where some people here jump the gun by saying that employees should be punished or fired for tweeting about it. It's not a secret that the event happened. Telling what songs were performed or what the atmosphere of the event was does not cause harm either. Heck, most of my work is confidential by HIPAA laws and I still can tell details as long as there is no way of identifying who the person is I dealt with.

Now, what could be wrong about tweeting something like being moved by the event, having liked that song from a band, or that at the end everyone ate cake? That is what Twitter is about - share your thoughts with others who follow you. You don't have to make that all dirty and come up with punishment for that.

whatdoiknw
some of you are so uptight...live a little.
Score: 7 Votes (Like | Disagree)
Read All Comments