Following today's Apple event that saw the 4-inch iPhone SE, 9.7-inch iPad Pro, and new Apple Watch bands and pricing announced, members of the press have been invited for hands-on time with the new products. 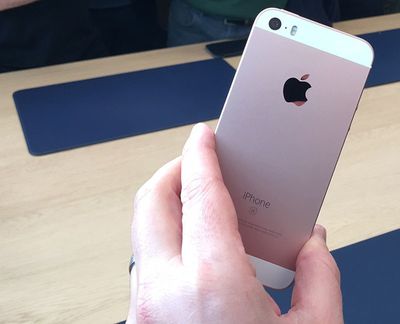 The new iPhone SE looks almost identical to the iPhone 5s, beyond the switch to matte-chamfered edges and a color-matched stainless steel Apple logo on the rear.

The new 4-inch smartphone retains a 3.5mm headphone jack, despite rumors that Apple will switch to an all-in-one Lightning connector on the iPhone 7 due later this year.

A closer look at the iPhone SE's new matte-chamfered edges (Image: The Verge)
iPhone SE is available in the same four colors offered across most of Apple's newer product lineups: Gold, Silver, Space Gray, and Rose Gold.
16GB and 64GB models can be purchased for $399 and $499 respectively. The 16GB model is also free when subsidized with a two-year carrier contract. Financing plans are available from $17 per month.

The new iPad Pro also looks virtually identical to its larger 12.9-inch sibling, with the only noticeable difference being the tablet's smaller 9.7-inch screen akin to iPad Air.

A side-by-side comparison of the new 9.7" iPad Pro (right) and 12.9" iPad Pro (left) (Image: The Verge)
The smaller iPad Pro has adopted many of the same pro-level features, including an Oxide TFT display, Smart Connector, Apple Pencil and Smart Keyboard support, and the same positioning of other ports and buttons.

The new 9.7-inch iPad Pro comes in four colors: Silver, Gold, Space Gray and Rose Gold. Pricing starts at $599 for 32GB of storage with Wi-Fi only, while 128GB and a new 256GB option will be available for $749 and $899 respectively. Pre-orders begin March 24 and shipments to customers will start March 31.

hspace
Who came up with the "brilliant" idea of a camera bump on the iPad - the device that you are more likely to use on a flat surface than any other device!?!?!? Dumb beyond belief.

They are basically forcing you to get a case for it.
Score: 22 Votes (Like | Disagree)

Bentron
I want to know what impact the protruding camera has on stability when on a flat surface.
Score: 16 Votes (Like | Disagree)

indiekiduk
Anyone else sick of having the useless iPad shoved down our throat? Where are the new laptops? People are on 2 or 3 year old ones now.
Score: 10 Votes (Like | Disagree)
Read All Comments