Apple came under fire over the weekend for an apparent failure of its App Store algorithm to rank app categories using any meaningful criteria.

Several users took to Twitter to voice their displeasure after subcategories in the App Store Games section were shown to be displaying multiple variations of similarly named apps spanning several pages.

More examples quickly followed, and apps with almost identical titles consisting of numbers were shown to dominate several "New", "Featured" and "What's Hot" sections in categories around the world, suggesting a complete breakdown in the way the algorithm processes certain content in the App Store database.

The issue was reported by users in several countries, including New Zealand, Spain and the UK, but users in the U.S. were apparently unable to replicate the problem.

Apple's marketing chief Phil Schiller, who took over App Store leadership in December, responded to the criticism via his Twitter account, promising to investigate the issue.

Back in November, Apple reportedly made significant improvements to the algorithm that ranks apps in the App Store, although those changes focused on returning more useful results following a specific keyword search.

Apple often hand-picks apps for promotion on the App Store landing page based purely on merit, but the bulk of the store's organization is automated. Apple has not revealed specifics about how its algorithm usually sorts listed categories, however it is generally accepted among developers that install frequency, reviews, star ratings, engagement and sales play a combined role.

Rudy69
The issue happens in the Canadian store too
Score: 1 Votes (Like | Disagree)

The issue happens in the Canadian store too

Yea just tried and can replicate the same thing here in Canada too..not that it matters but the same titles appeared in the same page is funny to see..sucks for devs I guess 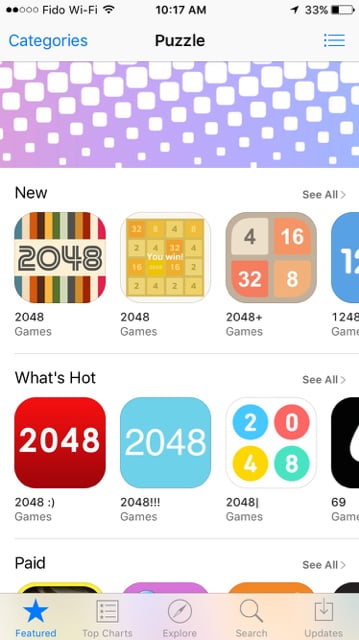