Eight months after posting a detailed summary of the "clunky" behind-the-scenes process musicians have to go through when using Apple Music Connect, Dave Wiskus decided to revisit his stance on the platform to see if Apple had made any notable changes to its grasps at socially connecting artists and fans. Wiskus -- an app developer and lead singer for the band Airplane Mode -- admitted in the blog post that he feels less "connected" to the musical world and thinks the actual social aspects of the experience have failed "miserably."

Similar to his post from July, Wiskus expounded on Connect's basic inability to function as a normal social network: it lacks a follow button on artist pages, a metric for how many followers a band has, and individual profile pages for a more engaged community, among other things. 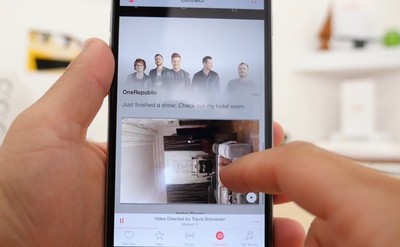 One of his most interesting points detailed a blunder with Connect's support, centering around the fact that an artist with a similar name managed to change the profile picture on Airplane Mode's page. After weeks of back-and-forth with Apple Music Connect support, eventually the band discovered that Apple's solution was creating an entirely new profile for Airplane Mode and abandoning the one with the wrong picture.

Rather than swap out images, the Connect support folks created a new profile for us with the correct photo (which we still can’t change, by the way). The frustration would end here if not for one little side-effect: we lost all of our posts and all of our followers.

Worse yet, those posts and followers are still attached to a now-unmanned “Airplane Mode” profile, so not only do we not have any way of telling our fans to follow the new profile, they have no way of even knowing that we relocated. Anyone who was following us can now assume that we’ve just stopped making new things. How many followers did we lose? No idea. How do we get them back? We can’t.

Wiskus notes that, despite all of his frustrations, "Apple is in a unique position to unify and democratize the music business" thanks to Connect's ability to integrate music sharing with social interaction, if the company decided to commit to bolstering both sides of that equation, that is. As it currently stands the artist isn't sure who Connect is for, and doesn't see much of a future for the platform if Apple continues to do nothing. "Seven months later—from a company the size of Apple—this isn’t just unacceptable, it’s pathetic."

Read all of the thoughts that Wiskus has on Apple Music Connect on his blog Better Elevation.

kevinkyoo
I'll say this again - create SEPARATE apps. Having all of these things bunched up in ONE iTunes is a disaster. Having one for your library, one for Apple Music, and one to purchase songs/videos/movies would be absolutely perfect. More direct in the UI, easier bug fixes rather than having to deal with all of these three in one currently, and a more satisfied customer base.
Score: 32 Votes (Like | Disagree)

brunosh
Well, hello Ping! It was obvious since the beginning.
Score: 25 Votes (Like | Disagree)

teslo
disclaimer - i haven't tried apple music. but it is - as it stands - simply intrusive. just give me an iTunes without connectivity and cloud options. i'm a music purist with only 1 goal: listen to my own music in an clean organized way. not a splintered disorganized mess that tells me i have different music depending on whether i'm on wifi or cellular.

between this and photo stream/camera roll/my photos/and whatever Photos is trying to do, i consider much of apple's Cloud/Internet 'solutions' to organizing plain and simple media a pretty big bloated 'miss'
Score: 15 Votes (Like | Disagree)

FSMBP
I don't know if 'social' is just where it fails miserably. When you have Apple fanboys like Jim D./Gruber hating on Apple Music, you know it's bad.

All Apple needed to do is: scan your existing downloaded music library (NOT REPLACE anything), have a reference in the Cloud. And mix that with the streaming music. I don't get how the world's richest tech company (which spent $3 billion on 'Beats') failed on that.
Score: 13 Votes (Like | Disagree)

HaukeHauke
You can turn off Apple Music Connect in Restrictions. Then you get a "Playlists" Button instead :)
Score: 12 Votes (Like | Disagree)

gramtrax
Welcome to the new Apple. Too big to fail?
Score: 10 Votes (Like | Disagree)
Read All Comments

Friday June 18, 2021 9:41 am PDT by Sami Fathi
After a long wait, YouTube for iOS is officially gaining picture-in-picture support, allowing all users, non-premium and premium subscribers, to close the YouTube app and continue watching their video in a small pop-up window. In a statement to MacRumors, YouTube says that picture-in-picture is currently rolling out to all premium subscribers on iOS and that a larger rollout to all US iOS...
Read Full Article • 174 comments