Apple yesterday released a small update focused on stability improvements and bug fixes to Smart Keyboard users on the iPad Pro (via iMore). When plugged into the 12.9-inch iPad, the device will notify users of an Accessory Update for the Smart Keyboard, which can be updated and installed thanks to the Smart Connector joining the iPad and the keyboard.

The new update is mainly focused at improving the connection stability between the Smart Keyboard and iPad Pro, along with addressing an unexpected wake-up issue some users have faced recently. The update is relatively quick, but users can opt to install it at a later time similar to larger iOS updates. 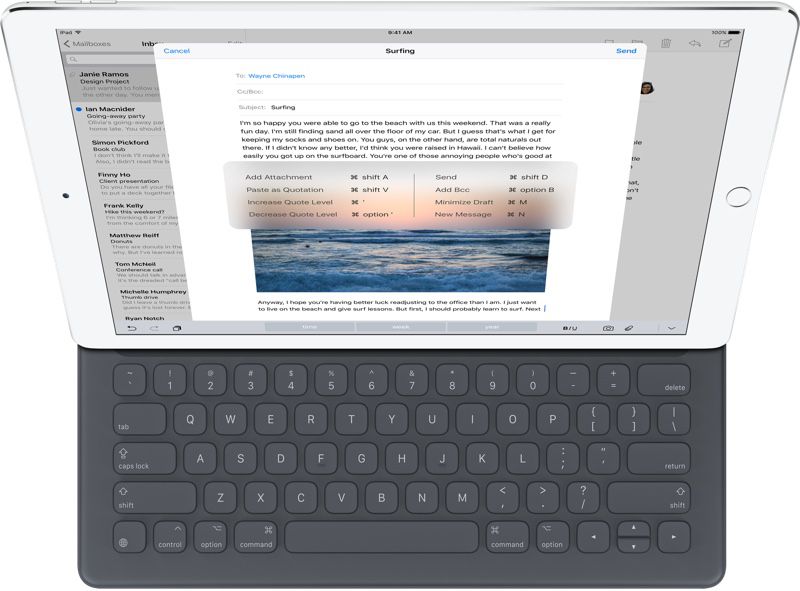 Recent numbers on the iPad Pro's sales point to an overall "successful" launch for the plus-sized tablet. During the iPad Pro's launch quarter Apple's device reportedly outsold the Microsoft Surface, despite an overall decline in iPad sales most likely due to the absence of an iPad Air refresh last year.

The Smart Connector allows for more than first-party updates to iPad Pro accessories; recently an update fixing a few significant bugs was pushed out to users of the Logitech CREATE Keyboard Case thanks to the power of the Smart Connector.

infiniteentropy
For those of you like me who may wonder why they didn't get it right away: separate and re-attach your Smart Keyboard, and it should pop up that there's an update available. Just FYI.
Rating: 9 Votes

Will they ever bring a German layout? Or other layouts from other countries?

nagromme
How about the Magic Keyboard? Super light, less cumbersome, and in some ways far superior, especially coupled with a Smart Cover or other stand case. And Apple has a tech note stating iPad compatibility.

But unless iOS 9.3 fixes something, it's NOT iPad compatible. Forward-delete is broken, and it constantly sleeps and re-wakes, losing keystrokes. (Not just me.) I had to return it but I miss the form factor!
Rating: 1 Votes
[ Read All Comments ]