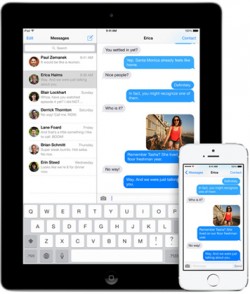 U.S. District Judge Lucy H. Koh has dismissed [PDF] a lawsuit against Apple over a long-standing issue that prevented some former iPhone owners who switched to Android smartphones from receiving text messages from other iOS users, as reported by Business Insider.

Koh originally ruled against granting the lawsuit class-action status, because it was not clear enough that all Android smartphone switchers were actually affected by the issue, but a trio of plaintiffs Adam Backhaut, Bouakhay Joy Backhaut and Kenneth Morris persisted with their case.

The three alleged that they switched from iPhones to Android phones in 2012. After that, texts sent to them from other iPhone users were not delivered. They were probably stuck in Apple's iMessage system, which was notoriously unreliable at delivering texts to Android phones until late 2014, when Apple introduced a fix for the bug. That constitutes a violation of the Federal Wire Tap Act, the three claim. Apple denied the allegations.

Apple launched a web tool in November 2014 for users to deregister their phone number from iMessage in the event they switched to a non-Apple device, and Koh ruled that Apple would face a federal lawsuit over the issue just two days later. As of Koh's ruling on Tuesday, however, all lawsuits against Apple related to the matter have come to a close with no punitive damages against the company.

I won't buy a new Apple device until they fix this.

Our court system makes no sense. It rules that Apple has a monopoly on ebooks (a claim that would make sense if you were talking about Amazon, and by extension, none if you talk about any other company), but that it's totally cool for Apple to hold phone numbers hostage.


Don't be such a silly goose!
Why not try to educate yourself?

Orlandoech
Sounds like Apple has a judge in their back pockets.

Waiting for the Apple apologist to back Apple and freak out over my post.

PS
I own lots of Apple products and dislike Android but this was a huge issue
Rating: 15 Votes

Our court system makes no sense. It rules that Apple has a monopoly on ebooks (a claim that would make sense if you were talking about Amazon, and by extension, none if you talk about any other company), but that it's totally cool for Apple to hold phone numbers hostage.
Rating: 14 Votes

Sounds like Apple has a judge in their back pockets.

Waiting for the Apple apologist to back Apple and freak out over my post.


Its just childish to say "Sounds like Apple has a judge in their back pockets".
Oh well...enjoy the holidays.
Rating: 13 Votes

Just takes a search of MR or any search engine, to realise this was a quite big issue. So how come the judge saw it as a non issue ? Seems weird to me based on the data available.


Because of the following..


Apple […] discovered that two of the three plaintiffs in the case had gotten rid of their old iPhones after they filed the suit against Apple. They are thus unable to demonstrate whether texts sent to their phone numbers went to their Apple or Android devices, Apple claimed. One of the plaintiffs also previously asked that she be dismissed as a “named plaintiff” in the case.

The three plaintiffs were a husband, wife and family friend. Judge Lucy Koh dismissed the case in a single-paragraph order.
Rating: 8 Votes

I usually despise class action lawsuits. But iMessages are still being gobbled up by Apple and not being sent as SMSs to my Android device. It is infuriating, and Apple is of no help. I used their web tool, and no improvement.

I won't buy a new Apple device until they fix this. At this point, it appears that I will never be buying another Apple product again. I have missed several very important messages, and had a few peeved friends and family members think I was ignoring them.


What are the damages? Missed text messages? Come on! There is no way anyone is going to be able to prove they had any monetary damages over a text message.
Rating: 7 Votes

Exactly. This is what people are missing.

Just because there's a problem doesn't mean there are damages -- and even if there are, it doesn't mean Apple is legally liable for them.


There are a lot of business who may use text messaging to keep in touch with eachother. (maybe nto the best solution) but they do. You have no right, nor ability to claim that missing texts doesn't have financial reprocussions on anyone.

Listen, I'm usually not one to say "CORRUPTION! SCANDAL! SHENANIGANS", but Judge Koh's history with Apple makes her suspect. Her Prior decisions which have been questionable, and even some overruled for overstepping by other judges makes her even more suspect.

For one, Prior to her appointment as a judge, she worked for the law firm, on the team that represented Apple's legal / patent team.
during the Samsung v Apple patent dispute. She had One injunction she imposed against samsung overturned by other courts because "Overstepped her bounds".
During the Samsung V Apple case she regularly allowed evidence from Apple, while rejecting the same evidence from Samsung
She also gave incorrect instructions to the Jury of the same case.

Over and Over again, her name keeps poppping up with these questionable activities as a judge. I'm not saying she's corrupt, but in the interest of fairness, and the interest of preserving honesty in the legal system, she should not be allowed to sit over these cases that involve Apple. There is way too much question of Bias or conflict of interest. Even if nothing is being done wrong, its suspect.
Rating: 6 Votes

apolloa
The behaviour Apple has consistently demonstrated with this iMessage issue in my opinion warrants them being fined within the European Union 10% of their gross operating profits, that's the maximum penalty when corporations really screw up.
Apple did one hell of an achievement, they broke the SMS system with their own locked down version. It's been anti competitive and anti consumer since the beginning.
iMessage doesn't come with a clear consumer friendly warning stating you may not receive messages from other iMessage users on this number ever if you leave the iMessage system!
They launch a fix that doesn't always work and all the Apple fanbase has to say is your a STUPID USER if you don't know about turning iMessage off, something the average Apple consumer would have zero clue about as Apple won't tell them until 'after' they've switched. The same consumers sucked in by Apples mass marketing of it just works mantra and style.

Yet the typical Apple case judge, Koh, throws the case out. My they are doing well this week, Ericsson apparently let them off very lightly and now this case is thrown out.
Rating: 5 Votes

iMessage is a service, when you want to use a service you should learn how it works.


The problem is:
1) iPhones sell on the reputation that "it just works", meaning you shouldn't have to research it beforehand.
2) iMessage is activated by default and many users have no idea that it's different from sending regular SMS.