There are few keyboards available for Apple's iPad Pro right now, but companies are slowing releasing new options for the larger-screened tablet. Brydge, a well-known manufacturer of keyboards for Apple's earlier iPads, has announced the debut of the BrydgePro, a keyboard designed for the iPad Pro.

Like prior Brydge keyboards, the BrydgePro is constructed from aluminum to match the aesthetic of Apple products. The BrydgePro is not a full case, instead consisting of a keyboard with two hinges that hold the iPad Pro in place. The hinges are adjustable, allowing the iPad Pro to be positioned into several different viewing angles to meet each user's needs. 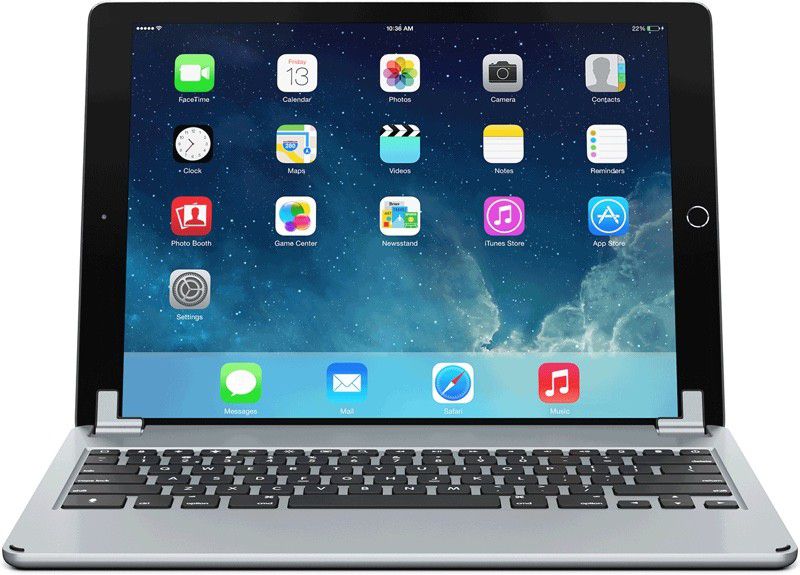 With no case, the Brydge doesn't offer protection for the iPad Pro, but that does make it a less bulky solution than many of the other iPad Pro keyboard cases like the Logitech CREATE and the Zagg Slim Book. It's available in Silver, Gold, and Space Gray, to match each of Apple's iPad colors.

The BrydgePro weighs in at 1.54 pounds, so it's essentially doubling the weight of the iPad Pro when attached. It's similar in weight to the Logitech CREATE and lighter than the Zagg Slim Book. It includes Backlit keys and a three-month battery life, connecting to the iPad Pro over Bluetooth rather than through its Smart Connector.

Pre-orders for the BrydgePro will begin on January 4 from the Brydge website. Shipments will begin going out to pre-order customers in April of 2016. Brydge has yet to unveil pricing, but its keyboards have premium price tags - the BrydgeAir for the iPad Air 2 is priced at $150.

Bbqthis
If this doesn't connect via smart connector, I don't see why it's noteworthy. I just want something akin to the Microsoft type cover. A real keyboard, but that only attaches via the connector. I don't want to have to remove my Smart Cover to use a keyboard.
Rating: 3 Votes

If this doesn't connect via smart connector, I don't see why it's noteworthy. I just want something akin to the Microsoft type cover. A real keyboard, but that only attaches via the connector. I don't want to have to remove my Smart Cover to use a keyboard.

The Apple keyboard cover is better than you may think. I did a typing test on it while in the store and scored 86WPM. It's pretty comfortable to type on. Try it out.
Rating: 2 Votes

Xprmntr
I'm guessing this'll be 250 at least- don't like the added weight, definitely will give it a try
Rating: 1 Votes

ArtOfWarfare
I went to the Apple Store just to play with the iPad Pro and iPhone 6S.

I wasn't expecting it, but I loved both Apple's keyboard and the Apple Pencil. I'm not in the market for an iPad, but if I were, I would certainly consider getting an iPad Pro with those accessories.
Rating: 1 Votes
[ Read All Comments ]