T-Mobile today announced a new holiday promotion it's calling "Un-carrier Unwrapped," offering free unlimited LTE data for all of its Simple Choice customers for the next three months. All existing Simple Choice postpaid customers as of the end of the day on November 23 will get the unlimited data.

T-Mobile also plans to unveil additional "gifts" for the next month, with a new gift coming each week. The company is teasing a "special holiday gift" for Sprint, AT&T, and Verizon customers, with one gift per carrier per week. 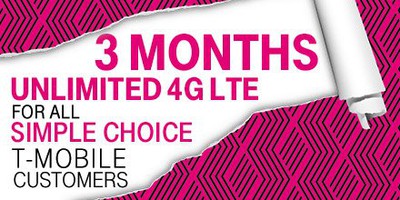 "We've had a fantastic year, and we're going to spread that T-Mobile cheer by starting with the most important people first... our existing customers! Now you get Unlimited LTE data on our blazing fast network for three full months as a gift from the Un-carrier to you," said John Legere, president and CEO of T-Mobile. "But that's not all....we know that Verizon, AT&T and Sprint customers need some holiday cheer, too - so we've got presents coming for them. Just wait!"

The unlimited data offering for Simple Choice customers will begin on December 1, 2015 and will last through March 1, 2016. Unlimited data will kick in once all existing data and Data Stash data has been used up. T-Mobile does require its Binge On video streaming service to be activated.

Unveiled earlier this month, Binge On provides T-Mobile customers with video streaming that does not eat into data plans, but it uses a data compression algorithm that streams video at a reduced 480p quality.

T-Mobile is also offering Black Friday deals on Samsung smartphones and discounting the UE Boom Bluetooth speaker by $100, dropping the price to $99.

swajames
Doesn't matter what carrier you're with - chances are you have a better plan and deal than you had a year or two back, and in large part that's down to Legere and T-Mobile shaking things up in the industry. For me he's by far the best CEO and biggest driving force for change in the business.
Score: 24 Votes (Like | Disagree)

joueboy
This is the kind of promo without neglecting the current customers. I'm tired all the promos that only benefits the new customers. Way to go John Legere, now put more towers then we're talking.
Score: 16 Votes (Like | Disagree)

Dextor143
He is a nightmare CEO for AT&T, Sprint and Verizon.
Score: 16 Votes (Like | Disagree)

To be fair, the entire industry has been pushing unlimited plans out of existence. At least tmobile still offers it as an option.

Also, in the same time period, the cost of their capped data plans have gotten cheaper and/or have had the data cap raised. So overall, across the company, I'd say the service has become a better value.
Score: 7 Votes (Like | Disagree)

tuna9720
Perfect decision. As a former Att customer, I'm happy with everything that TMO does and appreciate how they affect the entire business in a good way.

However they need to improve the coverage so bad..
Score: 7 Votes (Like | Disagree)
Read All Comments