Apple co-founder Steve Jobs, who passed away in October 2011 following a lengthy battle with a rare illness, contemplated building a so-called "Apple Car" as recently as 2008, according to his former advisor Tony Fadell. 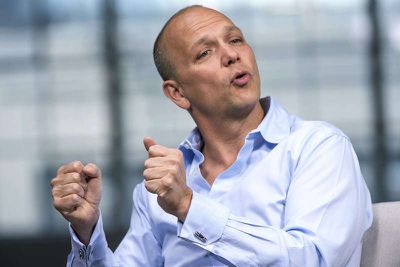 Tony Fadell discussed an Apple Car with Steve Jobs in 2008 (Image: Bloomberg)
In an interview with Bloomberg, Fadell, who led Apple's iPod division between 2001 and 2010, said he had discussions with Jobs on multiple occasions to hypothesize about what features an Apple-branded vehicle could have.

"We had a couple of walks," Fadell said in an interview with Bloomberg's Emily Chang. The pair posed hypothetical questions to each other, such as: "If we were to build a car, what would we build? What would a dashboard be? And what would this be? What would seats be? How would you fuel it or power it?"

Jobs, who drove a Mercedes, decided not to move forward with the idea at the time, said Fadell, instead focusing Apple's efforts on the iPhone, which accounted for about two-thirds of the company's net revenue last year according to SEC filings.


Fadell, who now serves as Nest Labs CEO at Google parent company Alphabet, said he does not have firsthand knowledge about Apple's car plans, but he did reflect on the similarities between smartphones and modern vehicles.

"A car has batteries; it has a computer; it has a motor; and it has mechanical structure. If you look at an iPhone, it has all the same things. It even has a motor in it," said Fadell, who's now the chief executive officer of Alphabet's Nest home appliances company. "But the hard stuff is really on the connectivity and how cars could be self-driving."

Apple faces growing competition from tech rivals such as Tesla and Google, and traditional automakers, if it chooses to enter the electric vehicle market. Recent rumors suggest Apple has assembled a team of hundreds of employees to develop an electric vehicle that could enter production as early as 2020.

Nunyabinez
Will the Apple Car come with a 5400 RPM Hard drive in it? ;)

lars666
"A car has batteries; it has a computer; it has a motor; and it has mechanical structure. If you look at an iPhone, it has all the same things. It even has a motor in it," said Fadell, who's now the chief executive officer of Alphabet's Nest home appliances company."

LordVic
With the way Fadell describes a car and compares it to a phone...

I think we're all fortunate Apple didn't build that car in 2008
Score: 8 Votes (Like | Disagree)

gugy
I am not against an Apple Car but would like Apple to focus more on hardware/software of computers.
Sometimes, I wonder if they are spreading themselves to thin among many different industries.
Score: 7 Votes (Like | Disagree)

Fadell could have been an Apple employee and an Apple branded auto could have been a reality today. The problem was Steve, for all his genius, wanted to have his thumb in every pie Apple made. APPLE could have done both, but STEVE could not. Steve was the best thing to happen to Apple but that is the truth.

What you are saying is not the truth but just an opinion. The Apple of 2006 was totally different from that of today. This is the truth: Apple in 2006 would not have the capital nor the industry clout to fund, coordinate and launch both a new smartphone AND a new car that is capable of competing within the market.
Score: 7 Votes (Like | Disagree)
Read All Comments