Apple has leased Tech Place on 101, a 202,000-square-foot building under construction at 2509 Orchard Parkway in north San Jose, California, according to the San Jose Mercury News. The new building is located next to a large parcel of vacant land, owned by realty firm Steelwave, where up to two more office buildings could be built to accommodate around 3,000 workers. 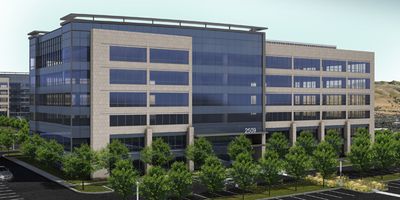 Steelwave render of Tech Place on 101 building in north San Jose
Apple, headquartered in nearby Cupertino, has been steadily expanding its presence in the Bay Area. In north San Jose, it owns or leases multiple properties along Orchard Parkway, between North First Street and U.S. Highway 101, including the 296,000-square-foot 101 Tech R&D building and a massive 43-acre development site approved for up to 2.8 million square feet of office space.

"They are taking this building to control that entire neighborhood," said David Vanoncini, a managing partner with Kidder Mathews, a commercial realty firm.

If all the sites were built out to their full capacity, over time, Apple potentially could employ up to 20,000 workers on the north San Jose properties.

The company also reportedly expanded into San Francisco for the first time in July, leasing a 76,000-square-foot office space in the popular South of Market (SoMa) neighborhood, and further bolstered its Bay Area presence by acquiring a 770,000-square-foot property in Sunnyvale.

Apple now has real estate in five Bay Area cities, including Cupertino, San Francisco, San Jose, Santa Clara and Sunnyvale. In addition to its One Infinite Loop headquarters, the iPhone maker continues development on its nearby "Campus 2" project, which remains scheduled for completion in late 2016.

Great. Just what we need. More high paid tech workers in this area. No one can afford to live here anymore unless you work for Apple, Google, or Facebook.

Would you rather have been living in central Detroit? Not so many employed tech workers to annoy you. Houses available for $1.

Don't believe every movie you see. 99% of Bay Area office buildings will survive a major earthquake. Even the century old downtown San Francisco apartment buildings were reinforced after the last big one. As a SF resident, I feel like this is the safest place on earth after Japan to be in a major earthquake.

Ask the people who (barely) escaped Sendai how well that went. A good portion of SF and Silicon Valley is below the Japan tsunami's peak height. I was also in Christchurch a couple years ago to see how well those modern reinforced hotels faired (they didn't).

And I don't need a movie to believe anything: Just a week before, I actually drove over that portion of the 880 freeway that collapsed. A coworker was on the Bay Bridge when a portion of that span collapsed nearby. I was in a Silicon Valley office building where light fixtures were falling from the ceiling. I had to dive under a desk. Those were no movie special effects. People in the Bay Area died. 1% of millions of people and tens of thousands of buildings is a lot.
Score: 2 Votes (Like | Disagree)

mtneer
I wonder if all this expansion is commissureate with the products they are churning out? I hope these aren't just supervisors supervising other supervisors in a gigantic bureacracy.
Score: 1 Votes (Like | Disagree)

A good portion of SF and Silicon Valley is below the Japan tsunami's peak height.

I am not saying there will not be an earthquake, but I am saying based on our coastal shape we will not have a tsunami over about 50 feet and not near the populated areas for the very reasons they have nice shape beaches and the related underwater shorelines.

My mom visited Christchurch a week before the quake and got "last known photos". I experienced the 1972 CA quake which wrecked a hospital and a freeway interchange and plenty more. The Northridge quake crushed apartments and freeways which took months with extreme measures to replace.

Earthquakes can be bad. But modern buildings survive them well enough to not kill their occupants. The building may need to be replaced.

I know companies have to have a plan that covers the death of executives, but I guess they don't have to have one in the event of major earthquakes. The concentration of your whole business in that area is stupid.

Um... you don't actually understand how to live in an earthquake area do you? I mean... it's not like we're constantly dealing with rubble and falling over. Most quakes are small and even major quakes don't devastate the entire population. We don't live in a 3rd world country where buildings crumble instantly. Most of our newer buildings are designed for seismic activity (Regulations!). Statistically speaking we have yet to lose a lot of executives to an earthquake and as you say, plenty of people to take their place.

Not saying it wouldn't be terrible, but it's still way better than places where you have constant extreme weather (hurricanes, tornadoes, snow) yearly or employing people who are not Bay Area people (i.e. really smart, creative, quirky, ambitious, generally kind and awesome).
Score: 1 Votes (Like | Disagree)

I wonder exactly what these future products might be beyond the Watch/wrist. With all this real estate Apple is snapping up there must be some pretty big stuff in the pipeline. What do you need all this space for otherwise?