Apple has acquired additional land in the Bay Area, inking a deal with Landbank Investments for an upcoming 770,000 square-foot campus at Central and Wolfe in Sunnyvale, California. According to the Silicon Valley Business Journal, Apple has leased the property for an undisclosed amount of money.

The upcoming campus is notable because current plans call for an amorphous design that eschews the traditional square office building. The space is advertised via the website "Not Another Box," which describes the curved structure as "the blending of art, science, and nature." It is not yet known if Apple's deal for the space will call for modifications on the planned design, however. 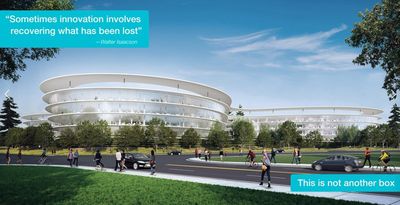 One caveat: It's unclear whether the project will be built according to that design, from architecture firm HOK, or if Apple and Landbank will want to modify it in some way. At this time there's no indication it will change substantially, and indeed Landbank has made the signature look a key selling point, with a website that highlights the out-of-the-box design. (That same website also features a quote from Walter Isaacson, Apple co-founder Steve Jobs's biographer.)

Construction of the Central and Wolfe campus was approved last year and will see nine existing buildings razed in favor of a new structure. The location is approximately five miles north of Apple's second campus in Cupertino and is near other Apple office buildings in the Sunnyvale area.

In recent years, Apple has been expanding rapidly in the Bay Area near its main Cupertino campus. In addition to its "Spaceship" campus that's already under construction, Apple has also purchased a large swathes of land in North San Jose and it has bought office space in San Francisco.

gigapocket1
Wonder if the company is getting to big for its own good
Score: 5 Votes (Like | Disagree)

Been saying it for months now: expect Apple stock to say hello to the $80s by this time next year.

FactVsOpinion
As if my feelings on the matter mean anything at all, I liked the idea of everybody being in one space--that is, in the spaceship building.

Apparently having cross-departmental, interdisciplinary collaboration is something Apple values, and one would think that keeping everybody together would serve that goal. Also Steve Jobs, when proposing the spaceship to the city of Cupertino, mentioned this particular benefit.

On the other hand, I suppose the company is simply growing too fast for even the spaceship campus to house everybody. Perhaps this should be regarded as a high quality problem rather than as a departure from the goal of having everybody together.
Score: 1 Votes (Like | Disagree)
Read All Comments